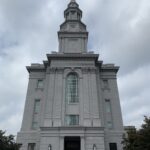 I rode to Philly with several ladies from the ward this morning planning to go to the temple. When we got here, my recommend was expired.

It’s my fault, of course. I should have checked it before I left. But it’s just as well. I’m not sure I could pass an interview anyway at the moment. I’m pretty sure there’s a God. I’m trying to get to know him again, but they will probably let that slide. It’s question 2 that’d be the problem. Maybe 3, too.

I’m a little bummed — thought I had another year. I actually do like the new endowment. The new initiatory wasn’t that big of a deal to me, but I know some others have been very excited about it. This means it’s been two years since the Great Temple Recommend Fiasco of Pride, Stupidity, and Extreme Misunderstanding. Hard to believe. At some point I’ll be past all this. All the triggers will be gone. I feel okay. Really. But tomorrow may be a different story.

Anyway, I’ve been meaning to write something about the ubiquity of faith crisis. I’m sitting here in the visitor’s center with a lot of time suddenly, so here we go.

Mormons often think a faith crisis is something that happens to themselves because They’ve Been Lied To(tm) or The Church Isn’t True. It happens to others who Read The Wrong Things or Want To Sin. But often, says Thomas McConkie, it’s just an unrecognized transition between developmental phases. Very little has been done in Mormonism to address the phenomenon. The models we do have, like Fowler’s Stages of Faith, are from other Christian sources. In our church our response seems to be to either shun those advancing between stages and struggling with new ways of seeing, or to perform mind-bending tricks of pseudo-logic, guilt, or threats of a losing your place in the hereafter to induce people to Just Stay. Even though we profess to believe in an effectively universal salvation, we behave as if not coming to church is damning or catastrophic. I’m not sure why we panic so much about it, except that I do think many people who stop attending do get into bad habits that can harm them.

But these days I just can’t justify the urgency. Church attendance isn’t part of Christ’s doctrine, but it is something that allows us to put our discipleship into practice and be sustained and nourished by others who are trying to do right in the world. Giving up on it completely is a negative if it means shutting yourself off from regularly practicing goodness (compassionate service, kind interactions in the hall, teaching/visiting/ministering). It’s also a negative if you decide to reject the good standards like the Word of Wisdom (ascetic it may be, but can anyone really argue that avoiding tobacco, too much meat, and alcohol are bad?) or keeping chaste.

Irrespective, the experience of faith crisis happens in all religions. I have watched with some interest the posts of Josh Harris. He is the 20-yo wunderkind who started the purity movement among evangelicals. He is in his forties now, like me, and he is also undergoing a faith transformation. Like me (like everyone?) in this stage, it seems that the Most Important thing in your life is the thing that gets re-examined the most closely. For some it’s family, and divorce happens. Some might make a major career change. Some deal with sexual orientation issues, either theirs or others’. For others it’s faith and religion. For some it’s all this and more. No matter what, it’s painful on a level that is difficult to describe unless you’ve been there. Harris is leaving the Christianity of his youth. Like Mormonism, evangelicals don’t really have a place for the practicing non-believer. Faith and expressions of it are everything in the religious community.

I read another account about a Jewish faith crisis. For a Jew, his realization is that the Exodus — the founding event of Judaism and Israel (and even Christianity and Islam to an extent) — probably isn’t an historical event. Judaism, however, is a more developed faith that has a cultural place for “secular Jews”. You can still be Jewish and a part of the community, freely participating in rituals, without believing a single thing in the Torah or even practicing the “standards”, like keeping Kosher or covering your hair.

But we lack this place in Mormonism. Our community is so hyper-focused on standards and belief/knowing that it is very alienating to be someone who believes that the gospel is good if not necessarily factually “true”. Someone like me, who isn’t sure about the Atonement, may be refused participation in our highest rituals, even if we are keeping all the outward signs of “worthiness”. If I express my concerns publicly, I’ll probably not be called on for substantial positions where my talents can be used. I don’t really worry about being rejected by my friends, but I will not have the same relationships or conversations if others fear my thoughts. I have talked to the bishop about this transition a little, but he did not ask for details, and I did not offer them. I don’t think it’d serve any real purpose. He can’t help me figure out what moral and ethical standard on which to base my life, nor can he help me decide how to implement it. He can’t help me determine what if any role the church is going to play in my attempts to develop as an adult. It’s all on me.

At first it felt very isolating to doubt the foundational reality of something so important to me—something that has become a part of my identity—but realizing how very common this stage of life is has eased the anxiety, if not the pain. I don’t feel as much anxiety to figure out all the answers right now. I am more content to just let it come. I’m trying to be unafraid of reality. I want to see through the bad and messy reality of humanity to goodness and order. Serenity, maybe, is what I’m seeking most at the moment. It doesn’t feel so much like a crisis anymore. It’s just a transition. But it’s still not easy.

(The book Navigating Mormon Faith Crisis by Thomas McConkie was really helpful for helping me switch to a transition-thinking as opposed to crisis-thinking.)

Bishop asked me what I thought “we” could do to let people in a faith transition know they are still part of us. I told him then I didn’t know, and that as I said, I don’t think that in my case there’s a lot that the church as an institution can do. I will find my own way. It’ll probably be my own version of Mormonism-ishness. For the earlier stage crises, like church history or LGBTQ+ issues or polygamy or patriarchy, the church writ large can act and settle folks about those if they square up, acknowledge the iffy bits, and remind people of all the good bits that are unaffected by this new-to-you information overload. A church can provide this information, and it can aid in connecting transitioners with knowledgeable people who can answer questions and help give a fuller picture of difficult topics.

But what about someone in the midlife transition from stage 4 to stage 5? Can the church really help? I am not certain that it can. This is the transition I’m in, and as I said earlier, I have a very real sense that I need to do this on my own. My natural inclination is to find an expert book or friend and answer my questions. But that won’t work here. I’ve had lots of callings. I attend the temple. I know the gospel. I keep the standards. I keep the commandments. I don’t need to be persuaded that these are good, helpful things. The gospel has been part of for me for so long I can’t remember not being guided by it. But this transition is one from outward gospel living to an inward gospel/goodness thinking to a degree that I did not imagine before. I think I would have said I was inwardly changed before. But this is different. It’s a stripping away of all of the fluffy bits, leaving behind the core pieces of what I want to be like more than how I want to live. I’m not changing to being more righteous/sinning less. But my motivation is changing in a way I did not know I even needed to or could change. I’m seeing differently, recognizing that many of the connections I thought established Mormonism’s truthfulness are connections made simply because I didn’t have anything nonMormon to connect that truth to. I feel acutely the paradox of physical reality and the reality of intangible religious experiences. I find myself seeking and embracing alternative ideas — “anything lovely, or of good report, or praiseworthy” — in a new way. I acknowledge the apparently conflict between my real-to-me religious experiences and other people’s just as real experiences that lead them to different destinations. Can a single church really embrace this kind of perspective? I’m not sure it can or should.

I do think a church can reassure adherents that this loss of faith is not really “loss”. It’s just a pruning away of the silly and unnecessary and unreal parts. You (I, I hope) are forming a unique self that, by embracing the paradoxes of life, may come closer to finally seeing things as they really are. A church can teach people that you don’t need to throw away the beauty you saw before you cleaned your glasses. That seeing new truth does not necessarily make old truth false.

But can we make a place for a secular Mormon, someone who is a faithful questioner? A nonbeliever in God? Miracles? Historicity of scripture? Someone who isn’t necessarily a True Believer but who is willing to keep standards and who understands the great value in the institution? Someone who no longer believes in literally true scripture? Someone with doubts but lives and respects the rituals and community, who acknowledges there’s *something* here worth living? Can we embrace that person without looking askance or with suspicion? The models say no. The texts I’ve read say that if you are a stage 3 person (which is where most Christian organized religions try to put their adherents and where most stay), a stage 4 person is weird (can confirm — been there the last few years), but a stage 5 person is a threat. Judaism seems to have figured it out. Can we?

I’ve been saving these links to post. I don’t think I’ll do a review of them all, but here are some related articles showing how very, very common these crises faith are throughout the Christian world. They are a necessary part of growing into adults. But I do think that it’s important that we don’t toss out the good of earlier stages just because we advance in understanding. The stem Commandments don’t stop being good just because we also have a higher law. Obedience and leader-following and individuation all have important uses irrespective of your capability to see or lead or do more.