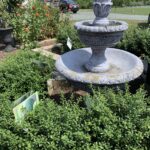 I went to Meadow Farms and finally found sugar snap pea seeds! Lowe’s didn’t have them, nor did Target. I also picked up some kale seeds and some snow pea seeds. I’ll plant the snow peas on the other side of the trellis next week — I hope they will grow up okay even with the pole beans already growing and doing well there. If they don’t it’s okay — I don’t like snow peas that much :-)

I finally pulled up the bush beans today and put sugar snap peas in where the pole beans died back in the flood. I have not picked any of the Garden of Eden beans in two weeks. I’m hoping they will go to seed before the plants totally give up. The beans on the other side of the fence trellis look good. I am letting the Lima beans grow up so they can become a little fatter before I cook them this time.

The tomatoes in the containers were all dried up even though we had a pretty good rainstorm two days ago. In fact, several places in the garden were dry, to my surprise. I pulled up another dead tomato plant and watered the rest. There are lots of paste tomatoes coming. I will freeze them as they ripen to make a big mess of sauce at the end of the season — maybe with some homegrown onions and carrots. Early Girl is my best looking plant out there this year, after I trash talked it so badly earlier in the year. The tomatoes from Early Girl aren’t great, but I think I’ll go ahead and plant it next year anyway because it’s been so reliable. Better Boy was fickle for me.

Lowe’s did have some cabbage, onion, leek, broccoli, celery, lettuce, kale, Brussels sprouts, and cauliflower plants out. They didn’t look super great, so I let them alone figuring I’d wait one more week before I give up on my seeds and replant or fill in. Meadow Farms had some really beautiful red cabbage and Brussels sprouts and cauliflower plants, so I bought a pot of each of those and put them in today. There are three plants of each. I paid $4 for each pot of 3, which means I am unlikely to save any money on them except the Brussels sprouts, but it’ll be fun to watch them grow.

Some more carrots sprouted, so I’m going to try and do better with watering in case they come up. If I don’t see any more carrots by the end of the week I will plant again. They’ll be a month behind the others, but it’s fine. Doesn’t cost me extra to replant. There are weeds coming up in the hay bales, but it’s crabgrass and no big deal to pick it. I had a fourth runty-looking cauliflower plant and planted it in the bale to see what would happen. The bales are breaking down a lot. I’m not sure they’re going to make it to winter.

The celery has not come up. I see a few very tiny kohlrabi now. The radishes look okay. Some broccoli sprouted, I think, but I may replant some of those, too. Some onions sprouted. I may buy some from Lowe’s to fill in what doesn’t come up, though. The squash isn’t looking too great either. I just can’t get anything to mature.

One of the clematis vines has really taken off. It has three flowers on it and is about 2 feet tall. I am hopeful it will really turn into something nice.

My other starts don’t seem to have started. It’s fine. I’ll try again in a week or so with the clematis. I think it just got too hot out there for the ones I tried first.

I’m feeling lazy, so I’m just going to lump all of today’s pictures together:

But, the big news is that after all these years, I finally bought hedge plants to put in my formal beds. I have grows vegetables there, a variety of bulbs with some success, some random flowers, and a whole heck ton of weeds. I did lots of researching and fussing and settled on Soft Touch Japanese Holly. Jared picked up 12 plants today, and I hope he will get them put in by evening.

I am not actually planning to put any around the fountain, but they look so good sitting there, maybe I will :-). This holly is supposed to spread about 3 feet and stay about 2 feet tall. I decided I did not want to go tall on the hedge because it blocks the camera, and the height of a 4 foot or taller hedge might look funny in such small plantings and small beds. Soft Touch takes shearing, so I can cut them square if I decide to. For now I’ll just let them go. I like the look of a hedge when it’s a little bit wild. I am very very excited to get these hedges in and make the formal space feel a little bit more finished!

A new groundhog has been eating my tomatoes. I’m so tired I’m not even fighting it. But I did adjust the sprinkler to spray where he lives — maybe that’ll keep him away for a day or so until I can get motivated to put out a trap.

I spent a little time dragging hoses around to make things look better. I need some hose guides to protect my plants.