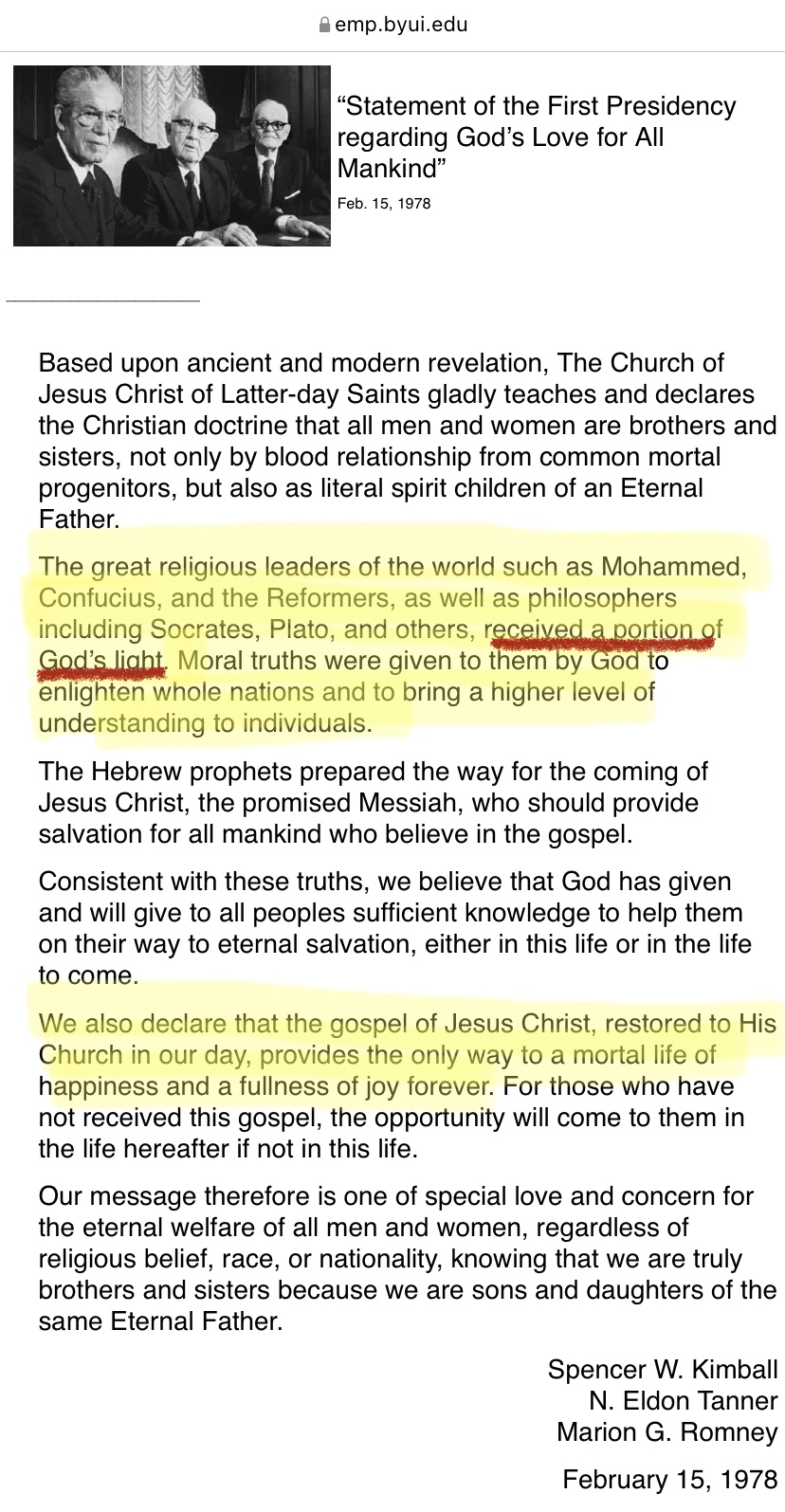 I know that not everyone loves Fowler’s stages of faith, but I’ve found it helpful for me. One of the characteristics Fowler identified in individuals who have transitioned to what he calls a Stage Five faith is a loss of belief in one true church, and a willingness to honestly engage deeply with the truths found in other faiths. For me that expresses itself in a belief that God does not prescribe just one way to Him and that expands to a vision of Zion that includes literally everyone.

On top of that, I don’t live in Utah and have many, many close, good friends of many faiths who are often getting their Christlike behaviors better than I am — including the atheists, the Wiccans, and Jews, who don’t even believe in him. I’ve seen firsthand that it is NOT NECESSARY for someone to be Christian or Mormon to be holy and do incredibly good, self-sacrificing things. Many of them do these good things in the community for drug users (when was the last time you saw a Mormon getting serious about helping dopeheads without being assigned to) and gays and other marginalized populations that Mormons would rather pray away. I believe that if there’s an After This, my friends will be rewarded for these actions, baptism or not. I believe God loves them and is pulling them to Him, not this or any other Church 1

So I say that to say: Brad Wilcox’s claim that my friends and family are spiritually crippled and playing with a few keys of the piano made me roll my eyes. How insulting and demeaning!

So I had in the back of my mind that I’d look for quotes from church leaders to disprove it when I had time.

It happened that someone pointed out the church’s new pamphlet on Islam a few days ago, and I finally had time today and took a minute to look over it.

This quote from that pamphlet stuck out to me:

In 1978 the Church’s First Presidency declared: “The great religious leaders of the world such as Muhammad … received … God’s light. Moral truths were given to them by God to enlighten whole nations and to bring a higher level of understanding to individuals.”

This looked like it might be the quote I was looking for, but there was one problem…

Get it? …? The ellipses. Whenever I see a quote with that many ellipses, I have flashbacks to the Brigham Young Teachings of the Presidents of the Church manual. I knew this quote needed contextualization to be fully understood, so I googled it.

Turns out it’s a First Presidency statement from 1978. Here’s a link to the whole statement.

The great religious leaders of the world such as Mohammed, Confucius, and the Reformers, as well as philosophers including Socrates, Plato, and others, received a portion of God’s light. Moral truths were given to them by God to enlighten whole nations and to bring a higher level of understanding to individuals.

It goes on to echo Brother Wilcox’s teaching:

We also declare that the gospel of Jesus Christ, restored to His Church in our day, provides the only way to a mortal life of happiness and a fullness of joy forever.

Seems a little bit of an odd statement to release the day after Valentine’s Day.

Irrespective, Brother Wilcox did correctly express an official teaching of The Church of Jesus Christ of Latter-day Saints.

This official teaching was recently edited to remove the playing-with-part-of-the-keyboard part. Was it deemed offensive? No longer representative of current teaching? It’s unclear.

But, we need to ask ourselves a question: if we need to whittle a teaching down to make it say something it doesn’t in a pamphlet made to show how respectful we are of other faiths, isn’t there a problem? If our “they have a portion” teaching is fully and completely a part of our faith, why water it down? Own it! But if it isn’t (and the edit shows that at least someone at CHQ thinks it isn’t) than let’s unteach it. Let’s change this teaching to be more reflective of our actual values and truthful-not-condescending-appreciation-and-love of other faiths.

And if as a people or institution we don’t have a genuine, not condescending love of other people with other beliefs and their teachings, let’s get it, FFS.