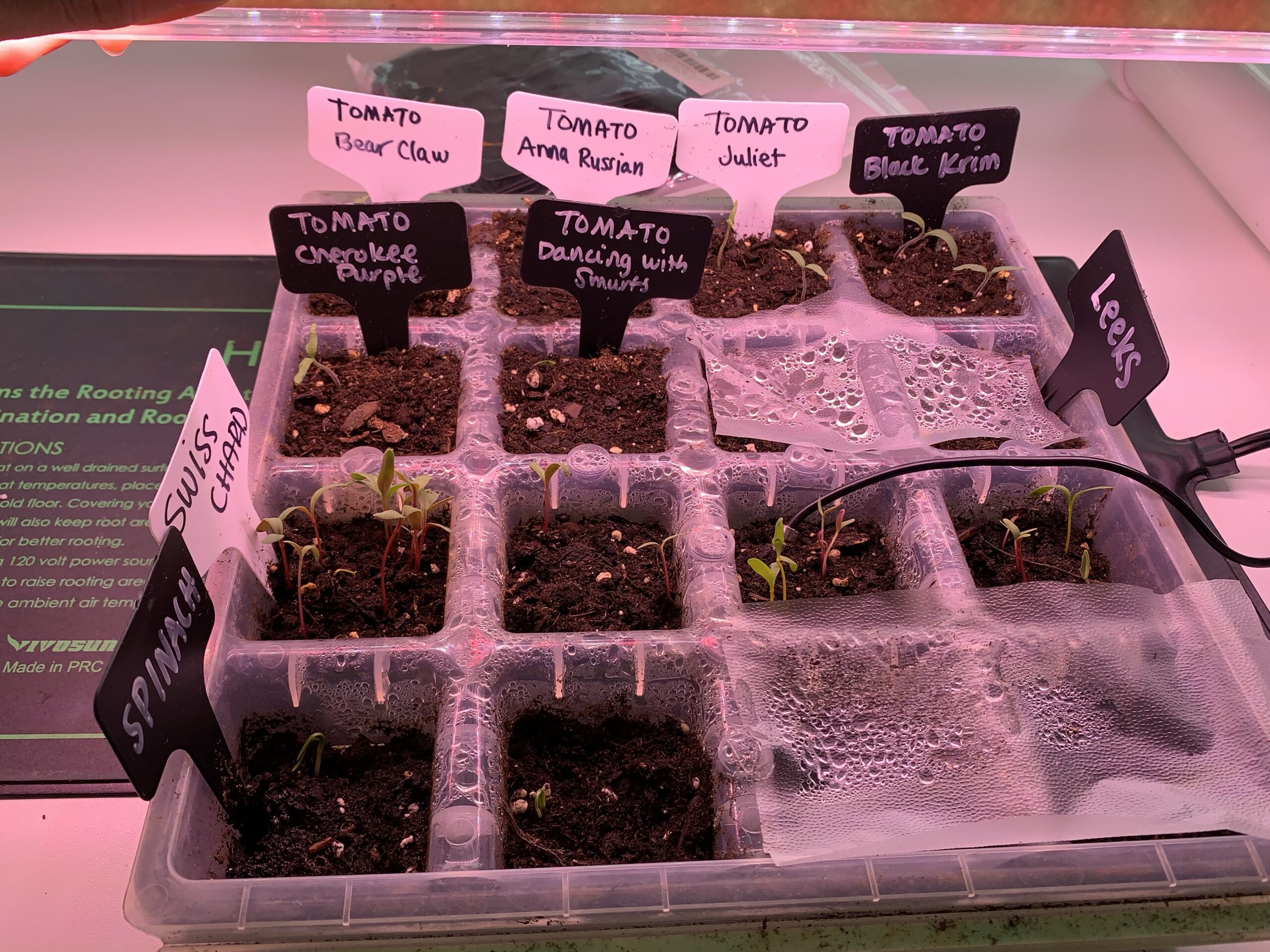 2022’s garden almost didn’t happen. We have been planning a trip to Europe since before the pandemic, but after our last cruise punctuated by Jared’s seasickness, I didn’t want to be cooped up with him for a consecutive eight days at sea, so we bailed.

It’s a bummer, but on the upside, I’m getting to start a garden after all. I put on tomatoes and some greens last week, and as of today everything has sprouted at least one plant except the leeks. I’m dialing way back this year on tomatoes, and I’m only doing eight plants of eight varieties:

I don’t have any Lemon Boy or Early Girl seeds, so I’ll buy those plants from the store in May.

I’m going to do an experiment on pea germination and growth just to see how they do if presoaked, presoaked and sprouted, and not soaked if **all started at the same time**. Many of the comparisons I’ve seen compare peas that have been presprouted with those that have not when planted on the same day. This doesn’t make sense to me. Of course a presprouted seed will do better than one that was not presprouted — it has a head start!

Instead, I’m going to test whether planting seeds dry, pre soaking them for four hours, or pre soaking them four hours and sprouting them for planting makes a different in growth or production. I think this is a more realistic scenario. A gardener looking at a packet of seeds wants to know if it’s worth the time to presoak and/or presprout, or if the seeds can just go straight in the ground. My suspicion is that it will not matter if you presoak or sprout IF it’s warm enough for the seeds to germinate outside. If you are planting very early, it probably will help, but I am doing my peas when it’s pretty warm already, and I think the seeds will sprout on their own without my help.

I’ve got three varieties of peas I’ll test just in case variety makes any difference in the way the seeds behave. This pea experiment will be a fun project to keep me busy over the summer.

We left a bag of potatoes on the floor in the kitchen for several weeks, and they sprouted. The tile floor is heated, and Since that spot gets some light, the sprouts were very nice-looking and green. I’ve never grown potatoes, so I decided I’d try to plant them in those grow bags Del gave me.

I am letting the cut ends dry up to avoid rotting once planted, and I’ll plant them in grow bags tomorrow to see if we can get potatoes for cheap. That will be another fun summer project to keep me busy.

I have started a whole bunch of lettuce and greens, both inside and outside. I’ve got arugula, salad bowl lettuce, spinach, Swiss chard, and a bunch of other lettuces that Del gave me that I’m not even sure what they are. I’ve planted some in some old rotisserie chicken containers that I’ll cut into strips and plant outside when the roots make a nice mat. I’ve also planted some lettuce outdoors in tidy rows that I will thin to try and grow heads. That lettuce is under the bean and pea trellis, where I’ve had success in years past.

New this year is dinosaur and red Russian kale, and I plan to put that in near rows under the other pea trellis after we put some much needed soil in over there. I’m not sure why I keep having to put soil in over there, but for some reason I need up putting a bag or two every year in those beds because they are low. Maybe I should be cutting plants down instead of always pulling them up….

Last year I put in several varieties of strawberry plants, but tragically we never pulled a single berry — mainly because I was working and neglected the garden at the end of summer. The plants are coming up with some green, fuzzy new growth and look pretty healthy this spring, so I’m hopeful we will get to enjoy strawberries this year.

Jared had a guy come out and do a (bad) garden cleanup for me a couple of months ago, so I had to go out and clean up the asparagus fronds that (inexplicably) Jared had him trim off at the top of my little fence instead of cutting off at the ground. The asparagus seems fine though with no obvious signs of disease, so I will re-mulch around them and the strawberries I planted last year in the newer few days.

Also during last month’s cleanup I cut back the roses a little bit — probably not as aggressively as I should have — and cleaned up the wild strawberry from the bed near the house. I’m hoping to get that all filled in with irises and ground cover this year, so I’ll pick up more phlox as soon as I can. I bought a new pair of leather gardening gloves that cover my arms to the elbow, and wearing the new gloves kept me completely protected while I worked! I am still astonished that I didn’t end up with any pricks or scratches through the leather at all. New Dawn is a wicked, thorny bush, and I was genuinely surprised that the gloves protected me so completely.

I pulled up weeds in the cut flower beds, and for the first time ever, I am mulching all of the beds. I may even start some flowers from seed, which will also be a first for me.

The two scrawny candy tufts by the fountain died, so I need to replace at least one of them this year. I think I also lost a lot of phlox to the summer heat last year, but I’m having a hard time telling what actually died out there because I let the weeds get up too high. I’ll know more in a few weeks.

My irises were crowded and had to be divided again, so I spread those around close to the house foundation in the English bed where the wild strawberry had been. I also cut back the Encore azalea bush, which has grown quite large over the years.

The tulips I planted underneath the rose arch are coming up. The daffodils are a few inches high, but they are too small to budding yet. My aunt had a guy who was very good about watching and hunting the deer population out here, but he moved a few years ago. Since then the farmer who rents the place’s boys have been hunting intermittently, and the deer are bothering the garden a lot more. I’m going to have to intervene if I want the tulips to make it without those dern deer treating them like a salad buffet.

Jared and I put down several bags of soil to fill in the raised beds where the soil had settled, and he spread some manure in the main bed that we will turn over and cover with new black plastic this week. I left the black plastic on the garden this year through winter. This plastic was a little bit thicker than what I’ve used in the past, so it lasted all winter without cracking.

I’ve got lots more work to do in the garden to get it ready for the next season. I need to do more weeding, put down more soil, mulch, and do some more planting. We are having a warm spell, and that’s always a pleasant change for everybody.