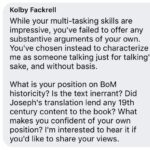 There’s a know-it-all troll on Dan Petersen’s FB page who likes to try and stir up controversy. If I thought he might be worth talking to, I’d engage. Some innocently do. I was tempted to engage today when he asked some questions of another viewer:

So, here’s what I’d say to Kolby if I thought he’d engage in a fruitful discussion. I find none of his questions particularly unsettling currently, though they have bothered me in the past.

What is your position on BoM historicity?

Earlier in my life, I mostly dined on FAIR and FARMS articles that “don’t prove” but are really trying to provide solid evidence for the BoM. I found it compelling and interesting and have used the material to build faith as I taught Seminary and as I’ve talked with other members. I did not find it persuasive on its own, but I filed it in the “preponderance of the evidence” category, showing the BoM is most likely a record of real people who really lived in America somewhere.

Since, I’ve become a little more critical, and I hope, a little more careful with my belief. Many of the FAIR and FARMS stuff I read was, in fact, written as responses to legitimate questions raised by critics and skeptics, some rabid haters, some honest, about claims in the BoM — not original research as I had assumed. In other words, many of the articles were rebuttals to critics, not “discoveries” that proved or provided evidence of the truth of parts of the book. My own faltering faith and study of late raised other questions about consistency with later doctrines and some other things. It can not be denied that evidence exists that the BoM is not a historical record. In fact, some of the evidence against its historicity is equally as persuasive as evidence that it is a historical text.

For each party’s claims of truth, there is usually an opposing viewpoint that is fairly persuasive. For me, sometimes the skeptics win out. Other times, it’s the apologists. I am not knowledgeable enough about DNA to make a determination about which side’s science is better or which conclusion is best. I can’t go dig everywhere in America to prove horses did or did not exist here, nor is Joseph Smith here to ask whether he substituted an English noun for some other beast of burden, and even if he were, could he be trusted to tell the truth? Your conclusions maybe different, but I find both sides to be equally persuasive, and I had to find another way to decide whether the BoM was historical or not.

Now, I suppose this is where I should say I prayed and had some sort of epiphany. I did not. My faith crisis had me struggling to trust prayer as a way to find answers, and as I said, I felt I lacked the knowledge to judge the science. Unless there was a glaring logic flaw, it was difficult for me to dismiss any reasoned argument.

If the BoM isn’t historical why did Joseph write a book and claim it was? Was it a terrible miscalculation on Joseph’s part? He thought everyone would snap up his “new scripture” and make him rich? If Joseph is as smart as his critics claim he is, this cannot be so. A scriptural commentary would meet with less resistance, and an allegorical fiction would sell far better. If he, as Dan Vogel claims, was a pious fraud lying for the Lord, why not try to get his book out in front of as many people as possible? He obviously knew what critics would say — the BoM rebuts the most common one: “A Bible! a Bible! We do not need any more Bible!” It doesn’t make sense.

Unable to find an answer outside the BoM, I decided to look more at the text. Is it reasonable to read the BoM as just a helpful story? It’s full of wisdom, but not a real history? I began to lean this way, concluding the BoM is not a historical text, but it contains lots of things that are good.

Does the book itself allow for a non-historical reading? I have to say no. How can a person take seriously its claims of containing truth — the word of god — but then dismiss all its other text as just a vehicle to transmit the truth? Claims of being a historical text are throughout the book. It’s everywhere. The Book of Mormon claims to be historical. It either is or it isn’t, and as I said earlier, I can’t prove it either way.

So for me it came down to where is the value, if any, in this book? I can’t deny that I feel something impelling me to change, and change for the better, when I read it — every time I read it. Few books have that effect on me. I have found that principles taught in the BoM, when lived, do make me better, kinder, more forgiving, more generous with my thoughts, especially about the poor. I’ve seen it have a similar effect on others. This is anecdotal, but it’s also testifiable. It’s…. true.

I was reading Terryl and Fiona Givens’ book The God Who Weeps about this time. One of the things he mentions is that when evidence can not establish truth — when there is no way to prove or disprove something — belief steps in. We get to choose what we believe, and what we believe says what kind of person we are. Am I the kind of person who can believe there could be something outside of this space, something after this life? Can I believe that a God may exist? Do I believe Jesus really came to the Americas?

This notion of whether or not Jesus came to the Americas is where I made my choice. If the Book of Mormon is not a historical text, Jesus did not visit America. He, then, is a respecter of persons, and not worthy of my devotion. The Jesus of the NT teaches things that also cause me to want to change how I behave, for what I call the better. But he did not leave help for those outside the 120 disciples he converted before his death. He damned all those in Africa or Australia nor North America who did not hear him. I choose not to believe in that Damnation Jesus.

In this space where I can neither prove or disprove the historicity of the Book of Mormon, I choose to make the jump to belief. I choose to believe that a book that contains life-changing truth also tells the truth about itself. I choose to believe in the Jesus of the Book of Mormon, who loves all his creations equally. I choose to believe in Mormonism’s God who does not damn those ignorant of him, but provided a way for them to see Him again — not a theoretical way dreamed up by theologians or the wishful thinking of Christians who realize how horrifyingly unfair much of their exclusivity claims are or even the Bhuddist universal reincarnation — but in Mormonism’s canonized, action-based, core doctrine of post-Earth life revealed in the Book of Mormon and the Doctrine and Covenants temple ordinances. I choose to be a person who believes actions matter. I choose to be a person whose religion includes salvation for all and the possibility of exaltation for all — infants, all races, the informed, the ignorant, Saints, and especially sinners like me. I choose Mormonism and its Jesus, who is not about punishment but progression. That Jesus chooses redemption over retaliation. I believe in Mormonism’s Jesus and who visited America, behaving and teaching consistently with behavior of a god I want to worship.

Is the text of the BoM inerrant?

Of course it isn’t. It does not claim to be. Joseph did not claim it was. Does anyone really think this?

What does inerrancy have to do with historicity? Deflective question.

Did Joseph’s translation lend any 19th century content to the book?

What makes you confident of your own position?

See above RE historicity. I am not “confident” about the historicity of the BoM, but I choose to believe it and I want to act consistently with belief in BoM Jesus.

But no possible answer to this question proves or disproves BoM historicity, nor will it convince you of my expertise — I have none, just like you. Try again.