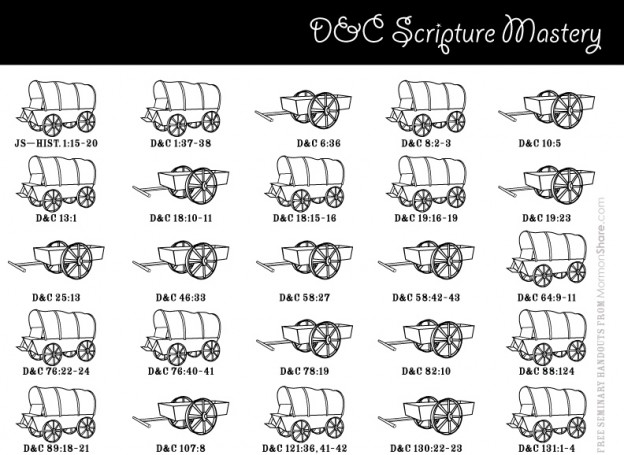 Back in the ye olde days when I was at BYU, someone told me that some GA had recommended tossing D&C 132 because it was directed at Emma Smith and not the whole church. The discussion was in the context of me expressing a wish that we’d stop spending so much time studying those painful, identical mission calls at the beginning of the D&C. Awful. Even back then I knew enough church history, thanks to my reading of the Church History in the Fullness of Times manual alongside my D&C study my senior year of seminary, to recognize how very often those revelations are used out of context. Is it right to use someone else’s blessings to find direction in our own lives? I thought no back then, and I think the same now.

As it turns out, it turns out that it wasn’t just James E. Talmage who wanted to get rid of Section 132. It was the entire first presidency and quorum of twelve apostles. The revised version of the D&C was published under the title Latter-day Revelations: Selections from the Book of Doctrine and Covenants of the Church of Jesus Christ of Latter-day Saints in 1930. It contained the following sections (some of which have particular verses removed):

Of the project Talmage wrote:

[June 28, 1930] By prearrangement I sat with the First Presidency during the afternoon, and together we examined in detail the copy I had prepared for the prospective bringing out of a book containing extracts from the Doctrine and Covenants. The purpose of this undertaking is to make the strictly doctrinal parts of the Doctrine and Covenants of easy access, and to reduce its bulk, furthermore making it suitable for distribution by missionaries and for general use by investigators. Many of the revelations received by the prophet Joseph related to personal directions in temporal activities incident to the early years of the Church, the immediate importance of which was localized as to time and place. Part of my work in the immediate future will be the carrying of this book of extracts through the press. (emphasis added)

But Mormons flipped out. They wanted to keep all of the revelations:

… Accordingly, some ninety-five sections of the Doctrine and Covenants were completely omitted, along with parts of twenty-one others. The most noteworthy of these omissions was the entire text of Section 132! Fundamentalist Mormons were outraged, “accusing the [LDS] church of changing the scriptures.” In response, then Church President Heber J. Grant, ordered the work immediately “withdrawn” from sale and the remaining copies “shredded to avoid further conflict with the fundamentalists,” according to Talmage biographer, James P. Harris.”

Having taught the Doctrine and Covenants a few times, I can confirm that it is the most painful of all the scriptures to teach. Why?

My dream annual study of the D&C/Church History would only last 6 months and then feature 6 months of study in modern issues. How wonderful would it be to have everyone reading A Latter-day Saint Theology of Suffering by Francine R. Bennion from At the Pulpit? What if everyone knew the names and stories of the RS General Presidents? What if they understood the marvelous changes to the women’s organizations led by Ardeth G. Kapp? There’s so much more to us than Mountain Meadows, polygamy, and pioneers dying on the trail. Oh, how I wish we could study those aspects of lived Mormonism — the real Zion-making — the real Zion-living!