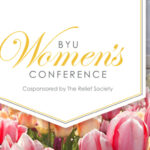 A friend’s daughter is helping with BYU Women’s Conference hospitality this year, and since I am going to be there this year, I told her I’d help on Friday. I’m pretty sure I signed up to help back when I was a student, too, but that was 20+ years ago — ahem —- and ye olde memorie is foggye. Anyway, the sister sent out an email with instructions on where to meet, and typical of Mormon women, a dress code. Sigh. We “have been asked” to wear dresses. Our hospitality aprons will be light blue if we’d like to color coordinate. Shoes will have to be ugly sadly since we’ll be on our feet.

I wish I were more righteous. I very nearly emailed back to say I couldn’t abide by the Dress code. I’m coming from Virginia and had not planned to bring but one skirt for church. Why do we Mormons think it So Very Important to dress impractically up top to maintain appearances but since we will be “working”, wear frumpy shoes below? AND WHY IS THIS A THING IN THE FIRST PLACE? Will my little apron not be enough to indicate I’m an “authority” figure?

I was cranky for days.

I’m going to wear the stupid skirt. My shoes will not be frumpy, however. I’d rather hurt.

I get unnecessarily worked up about these things. I gotta quit. Ultimately I decided that if it were any other activity and I had been asked to dress a certain way I’d do it. It’s these LDS activities that require a dress for working, hindering movement, that put me over the edge. It makes me feel like a Mormon Stepford Wife — a delicate flower, an ornament, not ready to lead or do the Real Work. It makes me feel as though I have to look a certain way to be heard. And that only a certain “feminine” (subservient, meek, following) tone will be tolerated. It feels like a uniform, meant to cause compliance and broadcast station.

Truly though, these women are just trying to keep the event (which will have far too many male speakers for my taste) “nice”. It would not even occur to me to worry about what I had on my person until someone mentions an expectation disguised as an invitation by which I know I’ll be judged — if not by rulers who think I am being obstinate if I don’t follow the Dress code, or by myself because I’ll feel like I’m being rebellious. Arg. And rebellious isn’t really what I’m going for. I want to be obedient. But I also don’t appreciate the implication that I can’t dress myself properly and need you to tell me which shoes and clothing to wear. Gah.

So maybe that’s the root issue: the Dress code means I can’t be trusted to dress appropriately, and if I don’t, APOCALYPTIC MASS CHAOS WILL ENSUE!

Of course it won’t. And the poor women in charge would be appalled at the time I’ve spent fretting over this. I am, to be frank. So I decided I’m being dumb. This isn’t the molehill upon which I need to plant my standard. It just isn’t that big of a deal. I’ll wear the skirt so YOU won’t be upset and I won’t feel like a rebel and work on not being irritated about it.

Please accept my apologies for any egregious errors in this post — I had a minor procedure on my wrist last week and I’m writing on my phone with my left thumb :-)