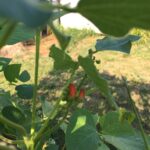 Today it’s supposed to thunderstorm. I wasn’t sure whether or not to spray, but I did it anyway just in case the storms miss us.

The tomatoes and beans are looking very good! I picked 5 unripe tomatoes and accidentally knocked a green one off in the process. Oops. I figured they better come inside or they’d split in the rain. The thinned tomatoes look fine, and I think one is putting on blossoms. I pulled up the farthest Roma since it is spent. The other Roma will go out before the end of the week. One of the Brandywines does not look too good either. It may be compost after this week.

I am pretty confident that this week’s heat spell will be the last for the year, so we’re going to take the shade cover off tomorrow. (That’s the royal We — Jared will take it off because he’s tall, and I’m, well, not.) I think the plants will be glad to be back in full sun again.

I took some pictures to compare the tomatoes before and after the 24N Miracle-Gro application. I’d say I got about 4-6 inches of growth per plant.

There is a definite foliage increase, even with all the diseased branches I pruned off earlier in the week. That’s exactly the result I wanted. I did not fertilize today, but I may do so tomorrow or Friday to try and thicken up that Celebrity and Brandywine.

I think that next year I’ll fertilize with the all purpose until the plants are well formed with foliage, and then switch to tomato feed. I think that will give me a better buffer against the inevitable blight and leaf spot.

Del’s tomatoes have shot up. All but two have fruit now, most with multiple fruit, and only one hasn’t blossomed yet. It’ll be fun to see what comes of them. As you can see, the plants on the end and in the containers have grown the most. They were the best-looking plants to start with, so I put them in the most open spots. At first I thought the garden soil in the grow bags was making the plants grow better, but you can see the marvel stripe plants at the end of the bean trellis are doing just as well. It seems bigger plants (plus more light) means better growth.

The beans look okay. It takes them longer to form than you’d think. I still have a quart or two bush beans that will need to ripen. There are exactly 0 Garden of Eden beans coming. Few are even forming. I guess I just need to wait a little longer. The trellis looks nice though:

Tomorrow is August which means I’ll have to start planing the fall garden in earnest. The hay bales were still very hot the day before yesterday, so I’m holding off on planting the carrots yet. I think they’ll be ready tomorrow. That heat is something I was surprised to feel — I did not realize rotting grass would actually really generate 130 degrees of heat. So interesting!

The new zephyr squash I was watching also stopped growing and rotted, so I did some checking. It’s blossom end rot. Again with the calcium problems! I and wondering if the pH may be off in the garden…. Anyway, today I sprayed the squash and tomatoes with a mix of Rot Stop, Copper Fungicide, and heavily diluted insecticide. I expect the squash to do better once the shade cover comes off and they can get more sun.

Today wasn’t a big day in the garden. This is the lull caused by the heat wave the past few weeks. Blossoms are coming on again without dropping, and I’ll be rolling in tomatoes again in a few weeks. In the meantime, the later plantings of the hybrids are still ripening and Del’s late tomatoes will begin ripening over the next week or so. I think San Marzano will be the next ripe fruit I pull. I’ve never succession planted tomatoes before, but I will do that next year. It has worked well this year.

Sydney hurt her knee at band and I got my hair done. Last night Jared and I went to the Alamo to see SpiderMan (enjoyable, but completely predictable plot). I ate raw cookie dough and gumbo for lunch. It’s just another day here in Paradise.