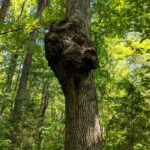 Jared, Sydney, and I were driving home today after a lunch at Eileen’s, when Sydney and I thought we saw a bear in the five acres! Jared turned the van around and went to investigate. He got this beautiful picture of our bear:

I spent the day getting sunburnt while power washing the front porch, steps, railings, and front sidewalk. I sprayed until the fuel ran out — twice. The sidewalk was super gross. We put in black dyed mulch last year that washed black dye all over the sidewalk and made an enormous mess. It is looking much nicer out there now that the sidewalk is cleaned up.

I also used the weed torch to go back over the weeds that weren’t killed the first go-round a couple of weeks ago. The weeds that survived were all grasses — mainly crabgrass. I worked on that for a while, too. My legs started running red from the heat on my wet legs, and later I hit the propane tank with the truck. Luckily it didn’t explode :-/

I pulled weeds out of the mulch between the liriope, too. I’m pretty sure that’s when I got sunburned since we took off between noon and two to get out of the sun and heat and went to Fredericksburg for restaurant week.

This morning I picked some more tomatoes, tomatillos, and Lima beans. I really like those Sieva beans. You really need more than I planted to get a good harvest, but they are nicely flavored and prolific. I mean, it’s not like I have anything to compare them to flavor- or production-wise, as these are my first ever fresh Lima beans, but I’m happy with them. They taste good to me.

The tomatillos are starting to turn purple. They look so cool! It is weird to pick them because they have this gummy stuff under the husk, but it is pretty cool to see how they turn purple.

Jared is cementing in my double water bibbed, electrical, water fountain post thing today. We are using a fluted bowl we got at the dollar store to make the basin for the water fountain. It’s going to be exciting to see how it turns out! It will be so awesome to have water right there in the garden! It was his idea to put in electricity, and it was probably a good idea. I can put in fairy lights or Christmas lights or a timer for a future drip irrigation system or a camera or whatever the heck I want. This *should* be the last thing that we add in order for me to have my dream garden. I want to put in a few pavers between the driveway and garden, but after that, I think it’s done!

The next big project will be demoing the old shed and putting in a cement pad for the new shed I bought (stole) from Walmart a few weeks back. I got an 8×13 shed for $1100 on Walmart.com a few weeks ago. It was a discontinued model and was a steal! I also need to paint the old metal shed. We might get a few more years use out of it if I paint it. I’m waiting until it gets a little cooler before I start that, though, for obvious reasons.

I planted the carrots in the hay bales this morning. Rainbow carrots are on the left. Nantes improved on the right. I forgot the seeds in the trunk of the car, and they would have gotten very hot. Oops. If they don’t sprout in a few days I’ll go get more seed and try again.

The squash plant has a few more baby squash on it. I can’t tell yet if the rot stop treatment has helped yet.

I also started some blackberry cuttings, some of that purple clematis, and a cutting from that English rose for kicks and giggles. I don’t need another English rose, but the New Dawn hasn’t sent up any new canes recently, and I decided to cut off one of the new canes from the Fitzhugh rose to see what would happen. I am going to layer one or two of the new canes in closer to the new trellis to see if I can move that bush a little closer to the trellis.

I will plant out the next batch of fall garden stuff next week. I have some celery and kohlrabi to go in. I’ll probably start some peas and some lettuce (in a bag of soil) as well. Swiss chard or kale, too, I think.

I got a new phone, and I took some more pictures of the butterflies to try it out. The new phone’s camera is WAY better than the old one.

Jared has been working like a Hebrew slave today. I surely do love him.