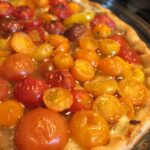 I was getting a backlog of cherry tomatoes, so I decided to use them up making The Pioneer Woman’s Tomato Tart. I went to Del’s today to get some of his gold cherry tomatoes for the color, he sent me home with a metric crap ton of tomatoes. I think I have at least a gallon.

I also cleaned 21 paste tomatoes plus 4 other ripe slicers and made sauce the traditional way in a sauce pan. I cleaned the tomatoes and decided to try and save the juice for the first time. With no effort beyond just putting the gel and seeds in a strainer, I ended up with 2 cups of fresh juice. With a little salt, it was delicious. I had leftover okra and some chicken, so I decided to make gumbo and used the cores and seeds instead of cutting up any more slicers where their flavors wouldn’t be appreciated. It worked out great. I made a fast blonde roux and used the water I boiled the chicken breasts in. Super easy. It wasn’t the best gumbo — not like my all day gumbo, but it sure beats store bought. We will eat that now. The sauce is going in the freezer.

I picked that marvel stripe today. Definitely waited too long, but I ate it anyway. The inside flesh was gorgeous despite the blossom end rot. I can’t say this was my favorite tomato ever, but it sure is pretty.

On a lark I decided to do a taste test of Eaely Girl and Better Boy. I liked Better Boy, and Jared liked Early Girl. After all my trash talking about Early Girl it has been putting on ripe tomatoes before Better Boy, and it has recovered from its earlier sickliness. I guess I’ll have to eat crow on Early Girl since Jared likes it.

I saved some seeds of that tomato I think is Brad’s Atomic Grape. I will try to grow them next year because they are so unusual.

I got enough beans today to make three big helpings. I didn’t have time/energy to cook them after the other stuff I did today, but I think we will eat them tomorrow. Know any good recipes for beans and cherry tomatoes?

I pruned off some dead/dying leaves and watered the plants that my meter said were dry. Everything is looking good.

Oh, I almost forgot! This is big news! Jared got the new pex line connected to the house water! No more hoses running across the driveway!!!

I saw two monarchs in the zinnias today. I thought they only liked milkweed, but whatever. It was hard to chase them down — they’re skittish compared to the other butterflies — so I had to use the digital zoom on my phone to get one. Jared counts the butterflies each time he goes out to the garden now. He says we’ve had as many as 30 flying around at one time! We will definitely grow zinnias again to attract the butterflies and bees.

And this sunflower made me happy:

I got my occupational therapy appointment knocked back today as well, plus visits to the grocery store and Walmart. The therapist is … different. But he told me what to do (bend my wrist more frequently) and I have OT 2x a week for the next three weeks. I did some more work fixing images and links on the blog. I still like it.

It’s been a busy, productive day: the best kind.