Tomorrow we are wrapping up Matthew. It seems like it took a long time to get through this book, and I was gone for nearly half of it. :)

I’m feeling better about my lessons now. I don’t know if it was my jet lag or the kids getting used to me again or a lack of lesson preparation or getting back into the habit of teaching or what, but things are going better now.

We had a game day before we covered Matthew 24. I have to say that it did not go terribly well. I was definitely under-prepared.

I put the kids in two groups of 8 so that I could talk to them about their devotional assignments and get them back on track with those. It’s apparent that doing devotionals 3 at a time is too many. I will need to choose a devotional section and let the kids work on ONE talk at a time to avoid confusion. We have started going in alphabetical order to make things easier on the kids, too. I am now also reminding the kids during our reading reminder who is doing devotional the next morning, which is also helping. Their devotionals are already prepared — they just have to present them.

Any way, one group talked briefly with me and then went to a table to color a picture from the New Testament on the scroll and a letter from the phrase “Jesus is my friend!” to go on our wall. The other group memorized the key phrases of the first 10 scripture mastery passages for 5 minutes and played a scripture mastery game for 5 minutes. Then the groups switched.

For the last part of class we played a game I got from the scripture mastery games database called Human Tic Tac Toe. I was a bit unprepared for this and it was awkward for a while. I had one girl refuse to play. So anyway, that one was not a big hit. I told them we’d try it again sometime, and I hope it will go better a second time when I am better organized.

For this lesson I handed a copy of Matthew 24 in Parallel that I made over the summer to each student. We used this to study the PGP version in order, answering questions and throwing out a thing or two here and there. I let myself get a little rushed at the end, but overall this was an okay lesson. I had prepared by reading nearly all the footnotes and the commentary in the Institute manual and regular manual. It was more than my usual level of pre-lesson preparation, but after the mitigated disaster the day before, I was definitely motivate toward better lesson preparation.

This lesson made up for any kind-of-bad lessons the kids had to suffer through while I was jet-lagged. It wasn’t a difficult lesson to prepare, but it went great! I will say, grouping the questions into unique sets of three was a lot harder than it would have been for a smarter person than I, but it made our discussion so great!

After looking over the manual and student guide and reading the chapter I came up with the following nine questions:

Then I had the class pull out their handouts and we covered the questions. This went super well. I did every thing right — tight preparation, great questions written out ahead of time, set up the main activity with a short opener. They did everything right by reading the text before class and participating. Yay! It was one of those confluences of awesome and went great!

I spent a few minutes complimenting the kids on their amazing reading. As of that date we have had three weeks of perfect reading. 100% of them did 100% of their assignments. On the other two weeks, they got 97% and 99%. We are able to do the kind of meaningful activities we do and answering questions because of their reading. I will insert here that more and more kids are coming sharing what their parents told them about the text. More kids are quoting the footnotes to me, and sometimes even sharing things that I missed! I love it! Oh my gosh — if you are not doing assigned reading you have got to try it. It is amazing to see these kids grasping the gospel and learning the skills they need to study the scriptures!

This was another lesson that I spent hours and hours preparing. I am usually a very simple lesson planner, and this lesson alone took more time than I spend in a week. And really, the lesson plan ended up being just a few sentences long, but it just took me so long to settle. There are so many great things in this chapter. You could literally teach 5 lessons from this chapter alone, and you could expand into many, many more. I read most of my parallel New Testament book for the parts where I had questions in the text, plus the manual and student guide. I read the text itself 3 or 4 times. I puzzled and puzzled and finally gave up, hoping that something would come to me at church on Sunday. It did, and it was simple and easy.

I had the kids open their notebooks and write two things: one question they had about the reading and one thing they learned or had forgotten. We spent probably 40 minutes covering the things they wrote. I was glad I had done such extensive preparation, and I think it was a great opportunity for them to dig deeply into the nuance of the text. I then bore my testimony of the atonement.

On my lesson plan, I had planned to leave 10 minutes for them to do a writing exercise and write their own testimonies of the Savior in their notebooks after having a great discussion and hearing mine, but I let them discuss instead. At the time it seemed fine to let them discuss, but it retrospect, it probably would have been good for them to write. Maybe I’ll let them do that Thursday….

I felt like we needed a break from our heavy lesson yesterday, and since today’s lesson didn’t have any really heavy doctrine I felt like I needed to push, we did a new game with the buzzers I bought last year. I wrote a bunch of questions on topics from the chapter as a reading review. Questions were worth one point, except for the occasional bonus question and the face off questions, which were worth 5 points each.

I have one student in particular who does not comment unless asked to directly, and so I added in an extra round at the beginning of each set of questions. Basically, I chose 4 students, one from each zone, to come up and do a face-off for a five point question. This allowed everyone a chance to play even though they might not have been able to buzz in.

It went great, but it was over FAST. Seriously. FAST. It probably took only 20 minutes. I decided to pull out my scripture mastery cards and tape balls that I had made during the summer last year. I learned last year that you should have on hand ready-to-go games that require no setup time in case a lesson goes unexpectedly short. Click the link earlier in the paragraph to see the games and activities I prepared.

We are learning the first 10 key phrases from the bookmark right now, so I used only those ten this time. Basically, I drew a name at random. That student came to the front and got to pull the tape from the ball but only until any other student called out the scripture reference of the card I held up. Students would get a few seconds to work on the tape ball and got a few pieces of candy. The kids loved this. They were so sad when the first (small) ball ended before everyone got a turn that I pulled out the second and went until every one had a chance. It was super fun, and we’ll definitely do it again. 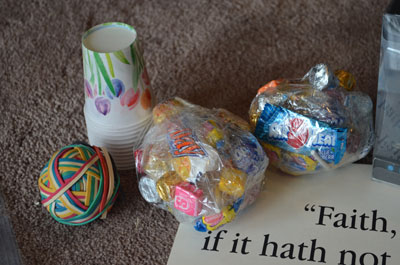 After much ridiculousness and stepping on of toes, I have four tables now. The kids are relieved. I have set the tables up in a new formation that we will test tomorrow. Yesterday we did boardroom (four tables pushed together in a giant rectangle) which worked okay for that activity but wouldn’t work for activities with the board or easel. I had to do a lot of walking and I felt like a zombie. Today we did broken boardroom (two sets of two tables pushed together on the long axis, students facing each other), but since I was just asking questions and not teaching at the board, it was hard to tell how that worked.

[edited] I wrote a rant here about our Seminary budget, but I decided to erase it. Suffice it to say $50 annually is a laughably ridiculous budget amount, Salt Lake. You should fix it.

I was talking with a former student about his hope of getting into West Point yesterday, and it got me to thinking about Brother Barraclough from West Point who taught at that first Seminary training I attended. I thought I might look up a book on the teaching method they use at West Point to improve my teaching. It turns out I couldn’t find one, but I did read a couple of articles on the Thayer Method of teaching. Thayer was a West Point president who developed the method. Basically, students are assigned work to complete outside of class. They they come and complete work with teacher in small groups demonstrating their grasp of content at chalkboards and through group discussion and off the cuff presentations to the teacher. Sound familiar? I didn’t realize that my method was so similar to this one. I wish I could find a book on the specific activities they use with this method to engage students to see if I could implement any of them…..