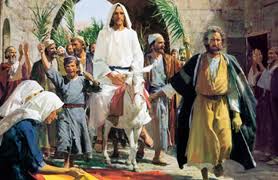 Well, it’s obvious that I’ve been away from teaching for a while. I’m feeling like I’m not quite on my A-game yet. I don’t know if the kids have gotten out of the habit of discussing with the other teacher or if I’m not asking the right questions. Either way, my lesson today could have had some improvement.

Yesterday’s was a fun and easy lesson to prepare. I told the kids that we were going to pretend to be newscasters describing the events of the the triumphal entry into Jerusalem. As a lesson opener to help set the stage, I took a few verses at the beginning of the chapter and had the kids write headlines to describe them. After a few of those, I gave each zone a section of the chapter to give a news cast on. The parables were difficult, but the kids were able to cover them by doing those interview-style, like “You were present when Jesus spoke to the Pharisees. What did you see? What did he say? What did all that mean? What was the reaction of the people?” I don’t know if all classes love acting out, but my kids love, love, LOVE it. It’s a fun way for them to practice reading text, finding what’s important, and then explaining it to the group. It’s triple repetition for them that helps with both learning and comprehension. If I do this again, I will split up the donkey-getting bit from the palm leaf part and leave the parables for class discussion instead of acting.

Today I handed out the sheets I got from BYU Studies on the Pharisees and Sadducees. We spent a little time going over the chart and talking about the beliefs of the Sadducees in particular so that I could explain that section on the woman and her seven husbands to the class. Next I covered the parable of the man whose son was getting married. A student summarized the parable from her reading, and then we talked about who each group of people was in the story. I covered this parable because it is not found in the other three gospels, and I wanted to make sure we didn’t miss it. Also covered the last three verses of chapter 23 because those are unique to Matthew’s account as well. I then used the chart on page 32 of the Student Guide to teach about Chapter 23. This was a dud. I was talking way too much and I could hardly get the kids to talk at all. Just as I was about to give up and wrap up the lesson, a student finally commented on some of the things I was reminding them about our Old Testament study, and we were able to have a short 5 minute discussion that I could tell finally got through. It was just in the nick of time, and I sent the kids off to the bus on a good note. I need to pay better attention to each segment of my lesson planning to ask the kind of questions that get discussion.

Choosing what to emphasize when teaching sequentially

If you’re teaching sequentially like I am, you may be struggling (as I was) to determine which parts of a chapter to emphasize. Sometimes I am not sure which part I should teach or which part I can breeze past because we’ll be covering it a couple more times in later gospels. It finally occurred to me last week to use the BD, Gospels, Harmony of entry to check each chapter to see which will be covered later. That helped me a lot with these two chapters. A similar harmony document is found in the Seminary manual.