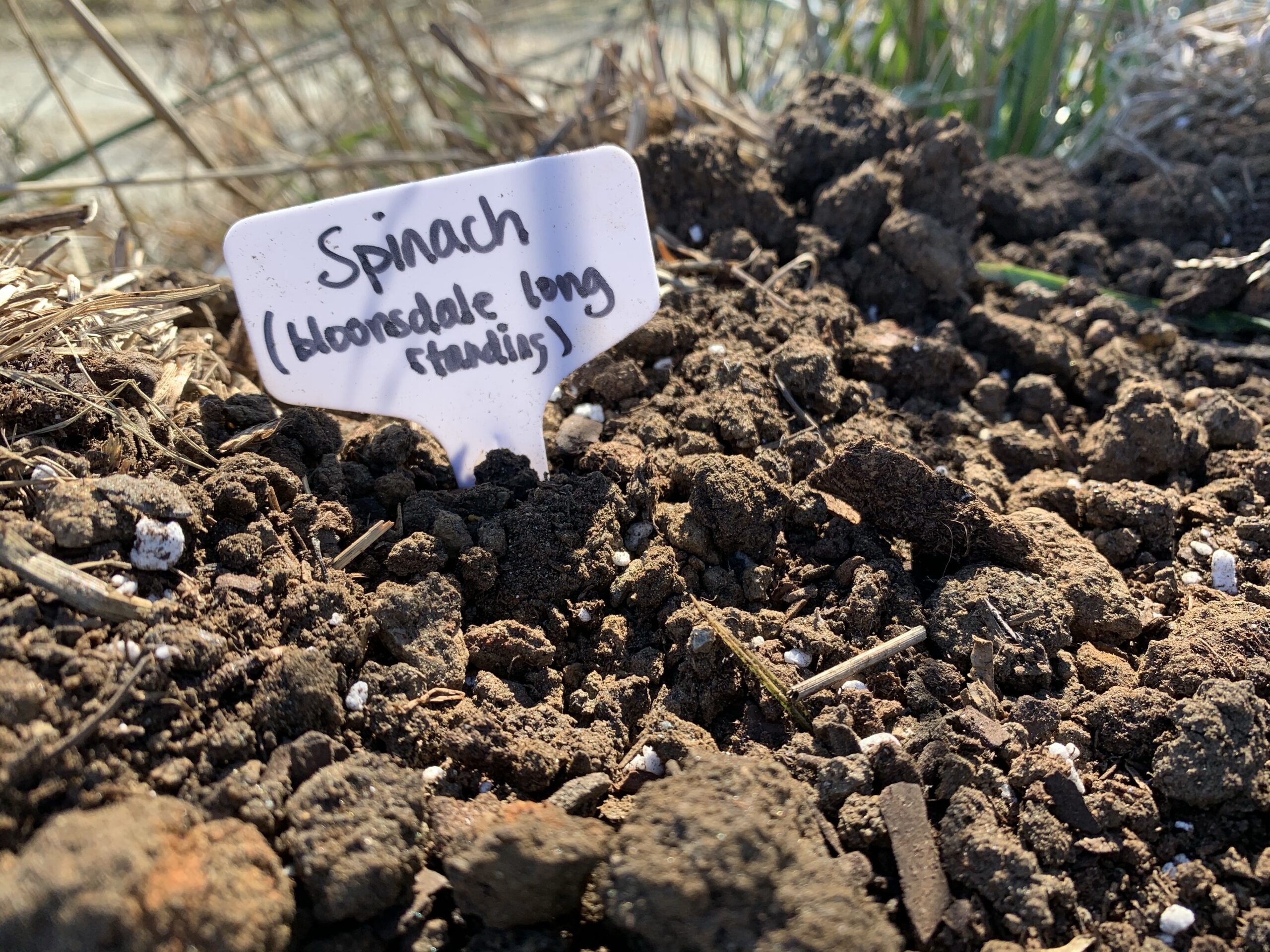 What started out as a plan to put in a few spinach and strawberry seeds turned into a two day marathon of work inside and outside for both Jared and me.

I wanted to start some spinach and strawberry seeds, so I moved the junky folding table I’ve been using to paint on to make space for a second seed starting table but quickly realized that moving that table would cause a cascade of other problems in my office that ended with us deciding to go ahead and put in the new shelves and build tables for that space. Yesterday Jared and I headed to IKEA to pick up some table tops and legs. That took a lot longer than either of us expected, what with traffic and all, but we had fun eating Swedish food and walking through the showrooms.

It’s shockingly warm outside today — 67 degrees! I decided to take advantage of the warmth and get some vegetables planted. I had planned to just put in a few spinach seeds and the alpine strawberry seeds, but I ended up working several hours doing cleanup and maintenance because it was so nice.

First off, I noticed the main bed was badly flooded. The little drain I put in had filled in, so it wasn’t draining properly. I dug out a new drain and was able to get much of the standing water drained off.

I never did get the bean and squash plants removed from the bean trellis, so I pulled those down today to keep the birds from wanting to build any nests up there.

So then I went to check on the poppies I put in last fall and found this:

All of the plant tags were gone, and the space was all turned over. Clearly something had been digging there. Arg!

I decided that probably the soil was dug up from the cat using the area as a little box. I’m irritated, but it’s not a total catastrophe because I have planted other poppy seeds in the English garden and front beds. I think I also have some left that are supposed to be planted out in late winter, so I’ll try to get those planted out as soon as possible.

I carefully planted some alpine strawberries and spinach seeds both inside in my awesome seed trays and directly in the garden. I’ve put a scrap piece of cattle panel over the space where I scattered the strawberry seeds, and I hope that will prevent the cat from messing with the area and give the seeds time to germinate.

I put some dirt on top of the straw bales from last year, and I planted the spinach seeds there. It’s kind of hard to tell from the pictures, but I promise — there really are little spinach seeds capping a year-old hay bale in my garden. If they grow, great. If not, I can replant in a few weeks.

While the poppy news was poopy, the rose news was, well, rosy. The new bush I put in has grown to almost four feet tall. Both main stems look amazing. You can see the little red and swelling bits, and soon those will be branches. I think I may have 60% of the trellis filled in next year!!!

It took ages, but I got the trellis pruned back dramatically, and I think it will look very good next year. I can see a few spots that will be a little bare come May, but I’m getting better at pruning and filling in the bad spots. I spread the clematis out again, and it will fill in nicely as well, I think. I am so excited to see how the arch looks next year!

It was so nice to be outside. I have seasonal depression, and though this year has been better than most years, I know that having the sun on my skin and increasing CBD diet makes a big difference in my mood.

Jared moved the cabinet to its new location, where he cut all the necessary holes to run network cable and power to the printers hidden inside. He carefully measured and cut the countertops for my new desks. Next he installed some open shelving and then attached the legs. The final result has me so happy! I can’t wait to decorate this room!

I must confess I am not looking forward to Jared starting a new job because I’m loving having him available to help me full-time with all of these projects. He says he will have to start a new job just to get a break, and he ain’t wrong.