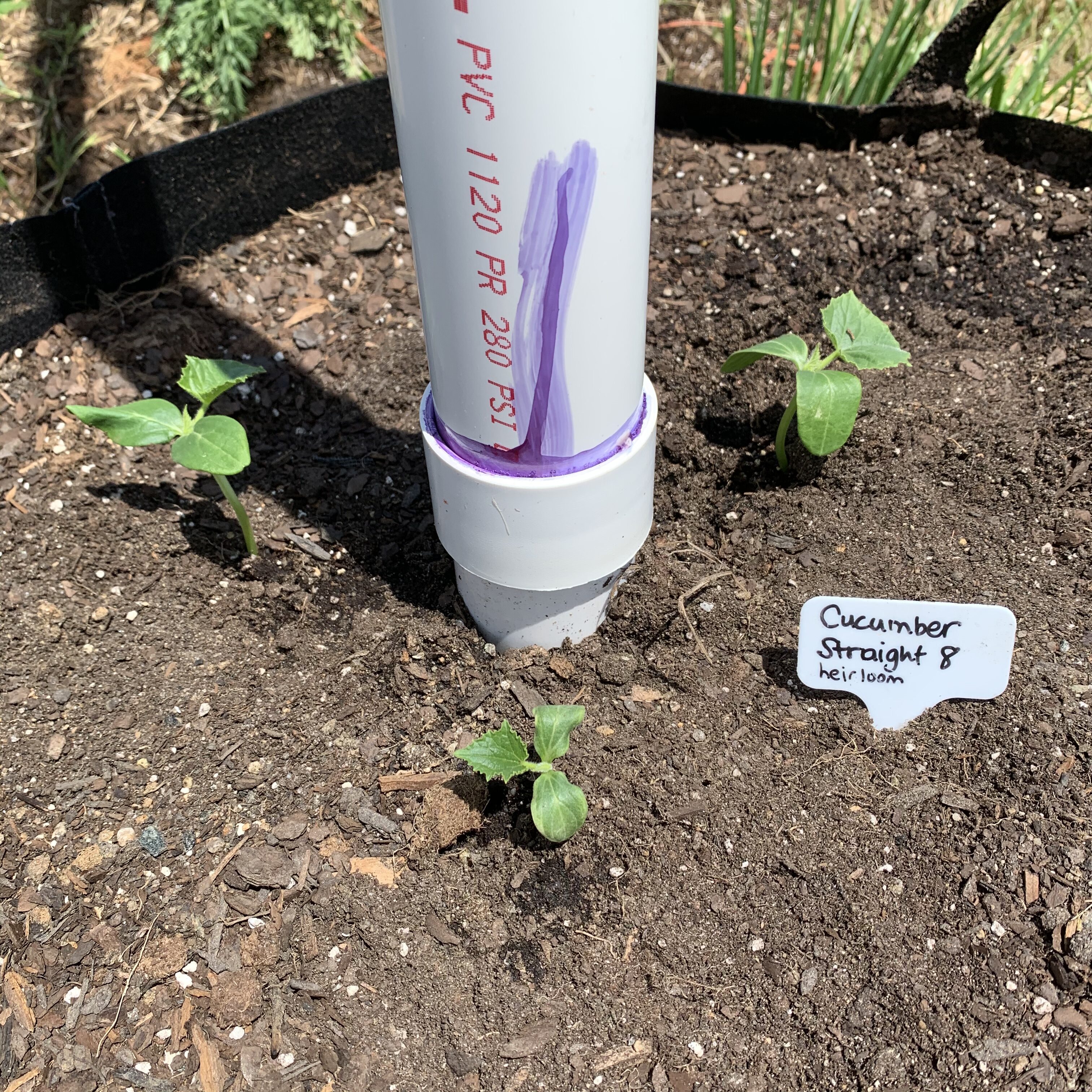 Jared finally fixed the broken trellis, so I put in my little baby cucumber plants today. I had planted three indoors thinking that at least one of the seeds I put outside would sprout. Nope. It was probably the frost. I put the three that came up out today, and I planted two more little seeds to see if they’ll come up. If they aren’t up in a week or so I’ll go buy a cucumber plant somewhere.

The lettuce I planted is doing very well! It’s too late to get much from these seeds, but I don’t mind picking at baby stage for salads. I can always get mixed local lettuce at the farmers market most any time at $2 for a huge bag. You can see that the leeks are taking off — probably it’s because they have more space to grow now:

I’m going to give those extra tomatillo seedlings to my friend Heather — they lost 14 cucumber plants to the frost that she grew from seed. What a bummer!

Jared is outside redoing the column for the electricity and water fountain and drip irrigation. Hopefully this time he listens to me and puts in a winter drain out. Last time he wouldn’t and ended up with leaks.

I transplanted most of the rest of the bean plants into their proper spaces (except one). The Sieva Lima beans I planed last week are starting to sprout, but the Purple Podded Asparagus is not. I think it may just be slow to germinate. I have several of those in my tray, and even after germinating they are very slow to sprout up. All of the scarlet runner beans that I put out survived the frost (except one), but they are all kind of stunted. The leaves died off on two of the five plants, but the stalks are putting up new shoots. The one that was on the end of the row and that was most exposed died completely, so I put in the healthy plants I grew. It’s exciting to finally have them in the garden:

I planted out one of the unknown beans in the middle of my Roma plants today. I put the pinwheel next to it to mark it. It has longer, kind of arrow-shaped leaves instead of the wider, more heart-shaped leaves that the other beans have, so it’s easy to identify:

I have a few more of these growing in the flat, but I’ll wait to put them out until the other Roma beans come up (or not). I’m hoping to have a better harvest of beans this year than last, although we had a fair amount last year. We only got about half of what I think we could have because I accidentally flooded the garden. I’m growing six different kinds of beans. We’ll see which ones perform for us.

That reminds me — some of the garden of Eden beans sprouted!!!! I am thrilled!!!! I will plant those out on the pea side of the trellis where I can take especially care of them and try to get those growing well. I’ll be able to compare them to Roma, which is supposed to be very similar, and see which one we prefer and will keep growing.

The peas continue to grow well:

I planted the squash and zucchini. I have one squash that didn’t sprout, so I replanted indoors, and I also stuck a seed straight to into the straw bale just to see what would happen. The vegetables in the bales look happy in their new homes though:

I got my first tomato! It’s a Bear Claw from the plants I ordered from California. It’s exciting to see something beginning to grow, even if it’s still just the size of the head of a pin:

The experimental hybrid tomatoes have died off, and it’s okay with me. I will replace them with something else that I’ll pick up at Lowe’s today next week. They did not get hardened off like the other plants, so it is unsurprising that they are dying off:

My other plants are looking super good though. Check out how much this Juliet tomato has grown in 7 days since planting out:

It’s a little yellow from getting too much water, but it looks pretty darn good. Yesterday I compared all of the plants to the pictures I took when I planted them out, and they are all growing and looking very healthy. Some have a little sun scald, but it’s okay — nothing like the practically dead Cherokee purples:

It seems pretty clear that whatever is in Miracle Gro is weakening the Cherokee Purples. I won’t use it again.

In other news, Jared made me some tomato cages. We had a small panic when some cardboard blew into them and knocked them over, but luckily my plants are still so small that no damage was done. I don’t like the rust on the concrete mesh, but I know these will last for ages, so I’ll put up with it. We made the cages 6 feet tall, so they are just over 5.5 Feet tall when pushed into the soil — just barely taller than I am.

My friend, Nichole, has three more tomato plants to give me, and I will be excited to add them in later in the year. I may buy a winter squash or melon to grow up my big trellis.

From now on it’s basically just a two-month battle with the diseases and water and bugs until harvest. Fingers crossed.