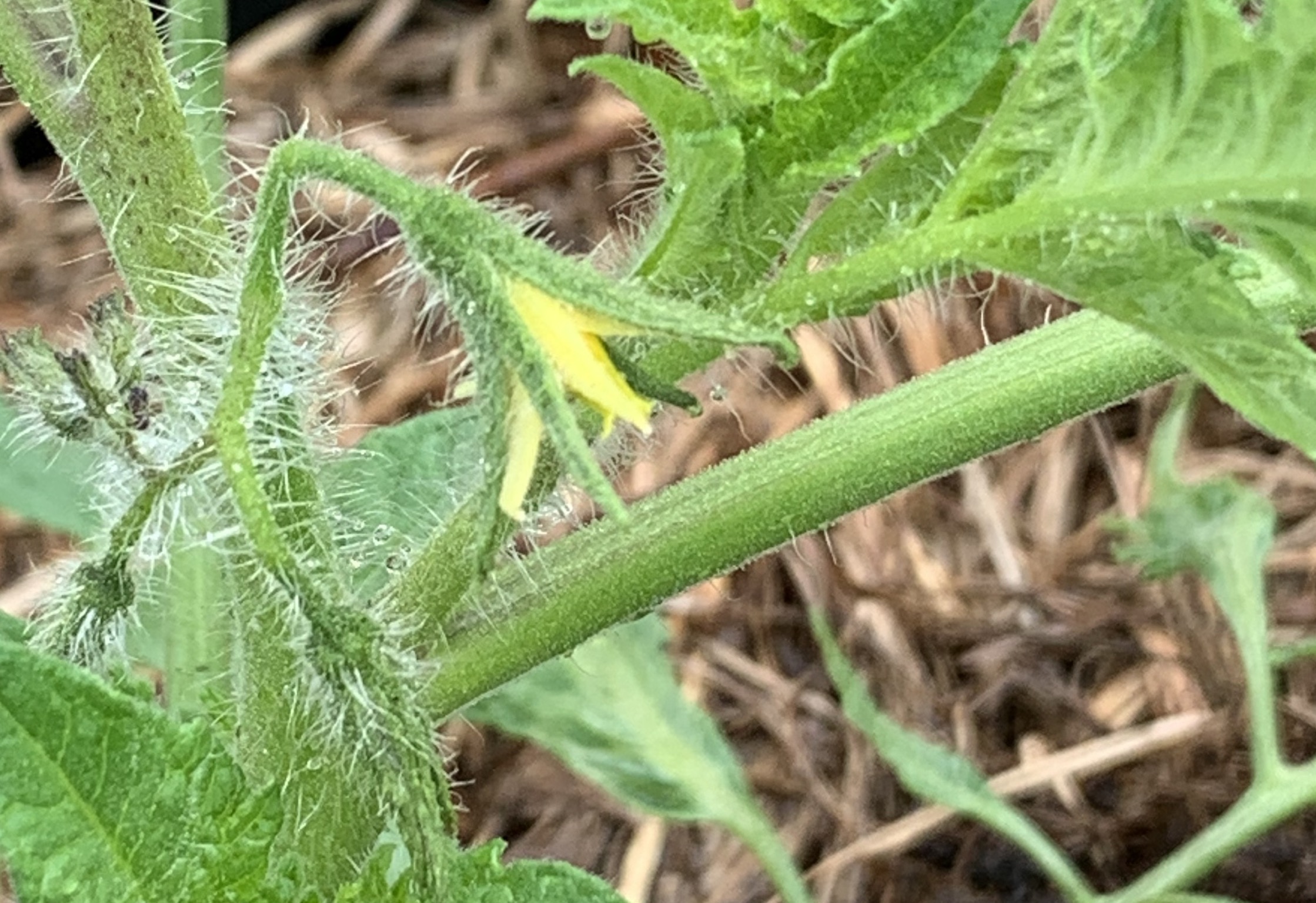 I was surprised to see my first open blossom today on a tomato plant that I grew from seed! So exciting! My sister in Houston already has first-sized tomatoes, Daddy has tomatoes, even Del has a legitimate double tomato on his Bear Claw, but I didn’t even have a single blossom.

2020’s first tomato plant to open a blossom is … Stupice! This isn’t a surprise — Stupice is known for being early. I should be eating tomatoes from my own garden come the end of next month. My aunt always says it’s a big thing to get your first tomato before July 4 here. I think I will make it!

The rest of the garden is looking good. I’ll post some pictures, mainly to document progress:

We are going to have a cement pad poured for the new shed, so I’m going to go ahead and have them also pour the back patio, back door steps, and retaining walls for the basement exit at the same time. When I originally planned out the yard, this next cementing stage was supposed to include some round steps up to the other porch, matching the ones there now. But the Aldi rose has gotten so big and nice and keeps the weeds and erosion down that I’ve decided to just leave the rose bushes and drop the extra steps. You know it’s bad when your landscaping dictates the hardscaping, not the other way around.

Also, I have to note how great the grass clipping mulch is working around the blackberries. It is really doing a good job of keeping the weeds back, and it looks tidy without being formal. I am adding more clippings each time I cut grass. Pretty soon I’ll have it in a good place where I can get in and see to poison the honeysuckle, poison ivy, and whatever else has come up there.

Last year we had so much to do in the garden that I was outside pretty much every day for several hours from March to June, and into July. This year all that work paid off, and I’m not doing much at all. I’m kind of sad about it, honestly, but it is nice, too.

Jared’s water fountain Mark II was a terrible mess. He got it about halfway poured without having a real plan for how to run the pipes and accesses he wanted. Finally I came over and told him—not very nicely—it wasn’t working, and he needed to quit. It does make me crazy that he won’t look anything up or try to make a plan beyond dinking with the parts before he makes stuff. Look, you’re an engineer, bro. Draw a freaking plan. It just burns my bacon how single-minded he is. He gets focused on a thing and does all sorts of stupid stuff to get there, when if he’d just change the end piece an inch or so, all that could be avoided. I’m all about the elegant, few parts solution. He loves to overthink and overbuild. After I cooled down and apologized, I told him it was time to drop the idea of trying to fit all those parts into one stand. He is already putting in (his idea) water at the other end of the asparagus bed, so I said let’s just run power out there and put all the drip irrigation controls there. I can change my piping plan, and he will have no excuse for doing crappy work because he will now have plenty of space. He ended up pulling out the Mark II completely and poured a Mark III on Monday and Tuesday. He is much happier about it. This means I am unlikely to have drip irrigation control before the end of summer, but I can live without it. It’s just the straw bales that need careful watching right now — mainly the squash and zucchini.

The butternut squash and spaghetti squash I put in have taken off in the new beds and have probably doubled in size. The newest planting sod beans have finally sprouted — two purple podded asparagus beans even came up. Those are a pain in the butt. I am not sure I’ll grow them again. Waiting for them to sprout has not been my favorite.

In other news, I posted in our local community group to ask if anyone knew where I could buy some Cherokee Purple tomato plants to replace the one that died (I had looked at Lowe’s, C&T, and the RACSB plant sale). A neighbor piped up and gave me four plants! So wonderful!

I am super glad to have these to put out — two of them already have blossoms! I’m going to plant two and see if they can get going, and I’ll save two. They look to me like they might be a little sun scalded after yesterday.

Anyway, it’s looking like a good year in the garden.