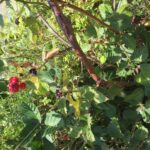 I want to start more blackberry plants. Jared loves them and it’d be nice to have enough to freeze some next year. I think I will leave the canes alone again and also start some new plants by layering and from cuttings. I looked over the plants today, planning to get some cuttings, but I think I will wait a week or so for more canes to come up, top them, and then use whatever I cut off to make cuttings. I have had much better luck letting these plants go than by trying to fuss over them, though this is contrary to what all the stuff says you should do online.

Maybe I’ll just top a few canes and let the others grow, cleaning out only the obviously dead stuff. Then I can compare fruit production on the canes next year.

The beans still have me worried. You can see in the pictures that they don’t look good. The garden of eden has a LOT of defoliation of the lower leaves. At least the bush beans are putting on. The beans are getting bigger and may be ready for picking in a few days.

The tomatoes still look good. Today I sprayed with the insecticide, rot stop, and Spectracide garden fungicide. I have read it’s good to rotate your fungicides, so I’m doing that to try and stay ahead of the leaf spot and blight.

I didn’t water today because we got a ton of rain yesterday.

All but two of Del’s tomato plants have put on blossoms, and all but one of those have fruit on them. Those that were bigger to start with have stayed bigger. Those that get the most sun have done better as well. I don’t expect a lot of production from the ones in the asparagus, but they haven’t died or even looked sick, which is a surprise to me. They are a bit spindly, but they’re healthy. I don’t know that I’d plant there again, but it’s been fine so far.

I decided that I didn’t want the hay bales on top of the gravel slope after all, and moved them back out of the formal garden beside the irises. I folded the Benny’s box under so that it wouldn’t stick out so much. I like the bales much better in this new spot.

Everything I read said the bales were too heavy to move when soaked, so don’t try to move them. Maybe straw is different than hay, but I didn’t have much trouble moving them at all. They were unwieldy and heavier than when dry, but not unmanageable. So now you know: yes, soggy hay bales can be moved.

I tested the bales yesterday for heat bybsticking my fingers inside. I was surprised that they were warm! I figured they were already pretty rotten and wouldn’t heat up much. I don’t think they were anywhere near the 130 degrees I’ve heard of, but they were warm inside. I put more fertilizer on today and watered that in well. I’ll do it again on Friday, and then Monday I’ll decide if they’re ready to plant or not.

I want to start some clematis. It sounds like it’s pretty tricky with a high failure rate. I will pick up some seed starting mix today and try it anyway. Can’t hurt, right? I’d really like to get some more of that purple clematis started on the New Dawn trellis. I’m a little worried that my clematis is too woody to start anything. I guess I’ll know in a few weeks…

The tomatillos have been looking rough. Lots of leaves were yellowing and the roots were getting even more exposed from being root bound, so I appropriated two plant rings I had near the rose bush and made a little tiered thing on two of the plants to raise the soil line. It was definitely a mistake to crowd these plants so much.

I pulled two ripe tomatillos, and I pulled two off a branch I broke. Each plant is SUPER prolific and tough. If they taste good, I might consider growing them again.

Here are a few more pictures from today: