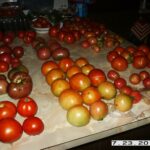 My dad’s tomato production is out of control:

It’s his best year ever for tomatoes, and he doesn’t know what to do with the harvest. I mentioned that I made some roasted tomato sauce in an earlier post. Yesterday I made some more and took a few pictures of what I did so that my dad could follow along and make his own.

Step one: Cut up the Vegetables

I used an onion, two green green and one yellow bell pepper, and a mix of paste, slicer, and cherry tomatoes from my garden. The slicer tomatoes are cut into about sixths. Aren’t they beautiful?

So technically, the picture above already shows the olive oil and garlic on the tray. Whatever.

Most recipes for roasted tomato sauce call for a quarter cup of olive oil. Since I do Weight Watchers, I don’t have any interest in adding that much fat. I use the Pam brand pump olive oil. Five pumps is one point, and I use about 6-7 pumps per baking sheet.

The other recipes call for 2-3 garlic cloves, but I don’t usually keep fresh garlic on hand. I use this canned, chopped garlic, and it’s turned out nicely in the two batches I’ve made. I use about 1 or 1 .5 teaspoons and sprinkle it around the baking sheet.

Sprinkle salt and pepper to taste.

Put the vegetables in the oven to roast until the tomatoes start to caramelize. I have a convection oven, and I roasted for about 50 minutes at 400 degrees for two baking sheets on two levels in the oven.

I have oregano and lemon thyme growing in my little herb barrel outside, and I keep globe basil growing in the window inside the house, so that’s what I used. You can use dry spices, too. Last time I made this I put the herbs in and roasted them as well. They dried up and some even burned a little bit. The flavor was good, but it wasn’t all that pretty.

You could, however, put your fresh herbs on the baking tray FIRST, and then cover with tomatoes and roast. The moisture from the tomatoes cooking down will keep the herbs from drying out, and it’ll help the herbs incorporate better. That’s how I’ll do it next time.

If I were to do this again, I’d probably leave out the lemon thyme. It wasn’t “Italian” enough for this.

Optional: Let the vegetables cool a little bit and scrape them toward the center of your aluminum foil liner. Carefully lift the liner and use it to transfer the vegetables to your blender. I like my sauce a little chunky, so I just pulse 3-4 times to incorporate the sauce.

I don’t can — I know way too many people who’ve had way to too many accidents. I put the sauce in a ziploc bag and freeze. You can add Italian sausage and freeze, too, or add sausage/meatballs later on when you serve the sauce.

Two baking sheets of vegetables made enough to feed three people one meal, plus enough to fill up the rest of a quart-sized Ziploc. It made just about one quart of sauce.