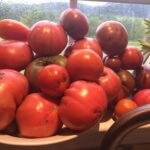 Well, today is the first day I know I can’t possibly use up all the ripe tomatoes I have. Almost all of the tomatoes I picked yesterday or this weekend ripened overnight:

It’s raining lightly but steadily today, so I can’t really do much in the garden. I did go ahead and stake up the two thinned tomato plants and suckered them. I pulled some dead leaves that had blown off the beans during the night and some dead branches of the tomato plants. If the weather is better tomorrow I will prune back the tomatoes even harder — the Celebrity looks good but it may not have time to put on fruit again. We’ll see. I tied up the branches of the healthy Better Boy that has gone crazy.

So many tomatoes got riper overnight that I decided I better pull them to save them from the critter (which has not gotten in my trap yet). I left a few to ripen for another day, but the haul was still impressive:

I weighed today’s tomatoes —7.5 lbs—and I think have as many more in the window. That means right now I have about 15lbs of tomatoes. I need to either make some sauce to eat/freeze, or freeze the others for later sauce-making. Sauce takes up less space than tomatoes though, and I don’t have a lot to do today. I think I’ll be doing that roasted sauce when Sydney gets home. Think I’ll buy some bell peppers to go in it…..

I ate up yesterday’s blackberries in some Dannon Light n Fit Greek Vanilla yogurt this morning. They were unbelievably delicious:

I did some reading on the beans. They may have a nutrient deficiency, but they may also have a disease. I lean toward disease. I know I already have mosaic virus on my apple trees, and the patterning on some bean leaves looks the same. I went ahead and spread around some Miracle Gro All Purpose to see if it helps the foliage (yes, I should have watered it in, but the soil is already waterlogged and it’s raining. I’m going to let Mother Nature water it in. That way I won’t add any more moisture to the soggy soil.). The bush beans are goners in a week or so anyway, but I’d like to save the Garden of Eden pole beans if at all possible.

Today I have a second squash on my zephyr! What? I swear that wasn’t there yesterday. I literally have a photograph of the plant from Monday and there’s no second squash there, but today there’s a 2.5 inch baby coming right along beside the first one. DTM is tomorrow from my planting date and probably this weekend based on the germination date. It’s amazing how accurate those dates are.

One tomatillo branch broke off during the storm and has wilted. It had a nearly ripe fruit on it, so I brought it inside to see what would happen. I don’t know if they continue to ripen after picked or not. In fact, I don’t know if you pick when they split or if you wait for the husks to dry. More research….