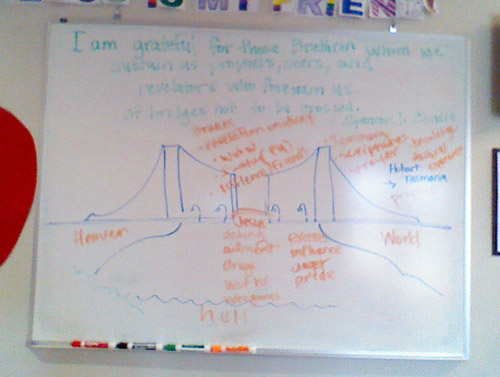 This was a short week due to the President’s day holiday, but we were able to do 8 chapters.  From now on the material is going to go faster and faster.  So far I don’t think that we are having any problems keeping up on the reading.  I did some averaging last week, and our daily reading is 96%.  That means that on an average day, 15.36 out of 16 students have read the assigned material before class.  I am still in shock.  They are doing so great!

This day I was passing out report cards.  When I can, I like to take a minute to hand each student their report card and talk to them for a minute about Seminary.  I congratulate the top 3 scripture mastery leaders and mention any concerns I have.  It usually takes whole class period, so I got the kids started on the Basic Doctrines Assessment and a Missionary Prepardness Worksheet so that they could work independantly while I spoke with each student individually.

On this day I wanted students to complete Section two of the Basic Doctrines Assessment so that I could compile the results.  I had initially planned to do my lesson after the test, but the kids were so droopy and tired that I did my short lesson first, knowing it would help them wake up.  My lesson objective was to teach the kids to avoid hypocrisy.

First, I printed chewing gum inserts on card stock.  Each insert was 140mm x 18mm and fit inside a Juicy Fruit wrapper. On each was written the following references and words: “Thou Whited Wall” Acts 23:3 and  “Full of Dead Men’s Bones”  Matthew 23:27.  I tried to save the file and Illustrator crashed.  So I remade them, and it crashed again.  Spock (my computer) definitely does not want you to have them, so there’s not a printable version.  You can make your own easily anyway.

After cutting them out, I put the “fake” gum in the center section of the gum box so I could keep them straight.

While teaching the class about the Apostle Paul’s appearance before Ananias and the Sanhedrin in Acts 23, I stopped just before Paul called Ananias a “whited wall”.  I asked the kids if they wanted any gum to help them stay awake.  Some said yes, and I gave some untouched gum and to others I gave gum with the handout inside.  Once the students realized that they had been gypped, I asked them why it was a problem that the gum was different on the inside than the outside indicated.  It’s hypocritical.  We say one thing, and do another.  We talk the talk, but we don’t walk the walk.  We read the scriptures on the handout, and talked about how outside the Pharisees looked good, but inside they were spiritually dead, or “full of dead men’s bones”.  We cross-referenced with 1 Samuel 16:7 ( a scripture mastery!) to talk about how God looks on men’s hearts and not on their outward appearance.  How should we treat others?

For your information, the phrase “whited wall” could be termed whitewashed wall, meaning a thin veneer of paint put on something to cover up the ugliness beneath.

I felt like I had not been able to cover chapters 21-24 very well because of all the housekeeping, so I decided to do an overview with the Silent Time Line Sorting Game using the Acts 21-24 Time Line Word Strips.  After the game we summarized these two chapters together.

Now, sit down before I tell you this.

I taught this entire lesson straight from the manual.

I rarely teach from the manual. The lessons just don’t work for kids who have read the material and so often they are formulaic that I seldom use even part of a lesson.  I can count on one hand the total number of lessons I have taught entirely from the manual since I started teaching last year.

I have been having a rough week and I spent the last two days crying.  Thursdays are our family’s busiest day of the week because of extracurricular activities and volunteering, and I was starting to get nervous.  I had prepared lessons ahead of time until Thursday, but not for Friday, so it was a real relief when the bridge lesson sounded so good in the manual.

I drew the bridge on the board, and while I was reading the story I erased the center section out of the bridge when the span collapsed.  I had drawn little lines coming out of the lights, and when the lights went out I wiped those off.  Those little acts/pauses in the story really helped keep student attention.

Anyway, I taught the lesson pretty straight from the manual, except that I used the quote at the end at the beginning.  We all read it aloud in unison.  Also I used the drawing.  And, per student comments, I asked the kids what were the “brakes” that keep us from going off the bridge.  We did say that Christ is the bridge that gets us across the gap from the world to heaven, passing safely over hell.  That didn’t really stick.  But the talk about what were the broken bridges and brakes in our life did.

During the discussion I was surprised when one of my students told a story that I told her about an experience I had with fast offering. She had read the quote I referred to and remembered the story. They really are listening!

They really are listening.