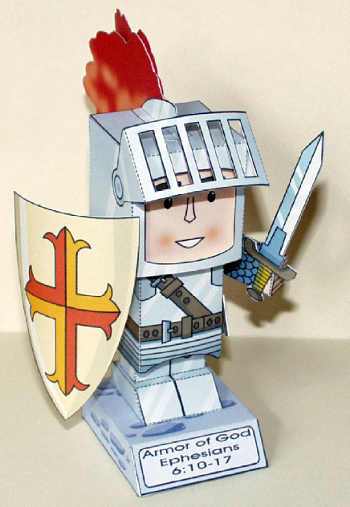 I’ve been collecting some links and other information regarding the Armor of God.  As usual, I start out with a very grandiose idea and whittle it down to something simpler.  At first I had planned to have each student make a full cardboard set of armor.

So I’m not sure now what I’ll do.  Maybe I’ll let kids make a single item of armor, or we’ll work together to make a set of armor.  The single suit is probably best.  Each zone could make a piece of the armor.  One thing that I do want is for scripture references, explanations, and related items to be added to or written on the armor so that it’s clear this is not a toy, but a symbol.

Anyway, I am posting the links I’ve been looking at here as a reference for myself and in case they help other teachers anticipating the armor of God lesson:

Random Fact: The Book of Omni isn’t really that lame.

Also, I have long suggested that the book of Omni is a provenance, not an idicator that the Nephites stopped taking records or were led by a bunch of losers who could not be bothered to write anything of value.  IMO, the small plates must have been of only a certain length.  Those who came along later just noted on the back leaf or two that the records passed through their hands, just as we note on a piece of artwork or other historic document as a proof of authenticity documenting it’s ownership.  Anyone who watches Antiques Roadshow knows that any thing with a provenance (granny’s note on the back with a date, maker’s mark, list of previous owners, etc), makes an item far more valuable because it’s authenticity can be better established.  The small plate’s authenticity would have been necessary to show that Lamanites, who were without a written vesion of history, had been misled and to bring them back to the truth using authenticated history.

It was a relief to see an actual scholar holds this same view in Joseph Smith’s American Bible: Radicalizing the Familiar by Terryl L. Givens Journal of the Book of Mormon and Other Restoration Scripture 18/2 (2009), 4-17. I’m posting the link below in case I’m teaching Book of Mormon next year and need to answer student questions about why the Book of Omni seems so lame to the casual reader.