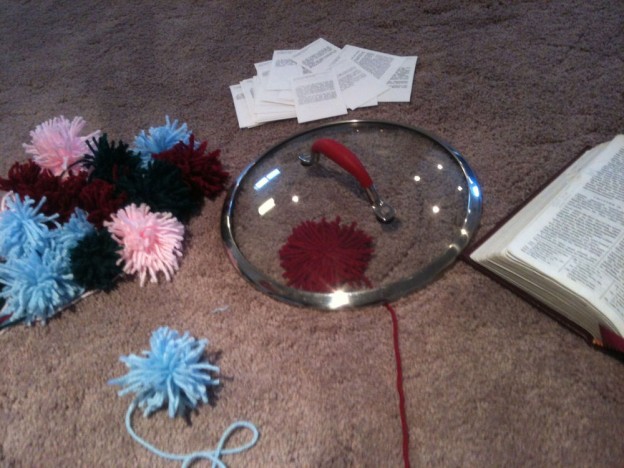 Yes, we really did read all these chapters in a single week.  My kids rule.

I was super excited about this lesson because of the three scripture mastery passages in 1 Corinthians 15, but it snowed.  In March.  AGAIN.  So we missed out on my lesson.  I had planned to open with a discussion of the Law of Witnesses and how it relates to missionary work (establishes the Word), and then I was going to teach students that the 3 scripture masteries in 1 Corinthians 15 are essential for missionaries.  One teaches the Plan of Salvation in three sentences, the other teaches baptism for the dead, and the other teaches degrees of glory.  I would explain the scriptures in context, explain how the context of those scriptures helps answer questions people may have about the meaning of those scriptures, and then I’d give time to memorize the scriptures.  I was going to give 300 March Madness points to the team of each person who passed off a scripture mastery.

I even had a clever opener for once.  I was going to have students summarize the plan of salvation in three sentences or less in two minutes.  Then we’d share ours and compare with Paul’s version in 1 Cor 15:20–22.

As it turned out, the snow ruined my plan and so instead I had to cover the 3 SM as I had a few minutes left in class later during the week.  Oh, well.

This was a bad passage.  I had a few passages marked that we could cover in class, but the text wasn’t really great for writing lessons. We could have talked about “by faith ye stand” or forgiveness or Moses and the veil, but meh.  Since the day before class had been canceled, I decided to back up and give that lesson instead.

I also had asked a ward member who had shared a testimony about needing the mastery passage about baptism for the dead (1 Cor 15:40–42) with the class to encourage them to learn their scripture measteries.  She had been talking with a nonmember who didn’t believe that baptism for the dead was in the scriptures.  She couldn’t remember the passage, but it turned out he found it in his electronic version.  I made a note of it in my scriptures at the time so that I would remember to ask her to come in and talk to us when we got to that passage.

She came in and took about 20 minutes.  Since it’s March Madness, our opening exercises are longer, and so I decided that since she did a good job with that scripture I’d just end 10 minutes early and give everyone a chance to memorize that one passage.  Several passed it off.

I chose 2 Corinthians 5:7 “We walk by faith not by sight” as my text today.  I had my early arrival students set up the chairs and tables as an obstacle course before class started.  Then during class we talked about the scripture, and I had one student volunteer to be blindfolded while the other student led her through the maze to find Eternal Life.  Our “eternal life” was a lemon that I had written the words Eternal Life on.

After this activity was over, we had a discussion about how this activity relates to our lives.  The blindfold doesn’t remove our sight — but our sight is limited.  We should listen to the Guide who can see the entire course.  Our blindfolded person closed her eyes completely, because she totally trusted the Guide.  She could trust the Guide because she had previous dealings with her.  She knew her.  Sometimes we are in the dark in life, but Christ never is.  When we exercise faith and follow him, we will achieve our eternal goals.

I put up some pictures of some skydivers on the television.  What do these people put their trust in?  How does it relate to our text?  The parachute might fail — will Christ fail?  “If a chute fails, grab your friend,” said one student.  We can rely on Christ.  Never jump alone.  If you don’t jump, you miss out on experiences that help you grow.  Fear paralyzes us, but faith empowers us.

I used a couple of quotes from Helen Keller during our discussion including:

“I would rather walk with a friend in the dark, than alone in the light.”

“Character cannot be developed in ease and quiet. Only through experience of trial and suffering can the soul be strengthened, vision cleared, ambition inspired, and success achieved.”

“The most pathetic person in the world is some one who has sight but no vision.”

Good discussion.  The kids, especially the boys, like it when we can relate the gospel to a sport :)

I was excited about this lesson, but I was .so. .tired. from helping/hounding my middle school aged son to do the classwork and homework he hasn’t been bothering to do or turn in this entire quarter (up to 2:30am, and then I couldn’t sleep).  Plus, yesterday I had signed up to spend the day helping the middle school band with their travel assessment AND it was opening day for the school musical, and my son is in the pit band.  I would have gone to a different performance, but we were taking my 82 year old aunt, who is busy for both of the other performances.  Talk about a long day.  It was supposed to snow again, and I was praying for another missed day due to a two hour delay, but Heavenly Father ignored me.  It was fine, I guess.  The lesson went pretty well, imo.

I set up around the tv, and on the easel I wrote

I opened by asking students what they liked from this rather long reading, and we discussed their ideas for about 7-8 minutes, I guess.  Then I showed the class 2 Cor 13:5 and we talked about what it meant.  We then transitioned to a video of the 1995 talk where GBH said “Try an little harder to be a little better.”  I showed that talk and asked students to watch for things GBH taught that we could do a little better.  (I had meant to have them write down ideas, but …. fail.  I was so tired, I was lucky to be upright.)

I didn’t show the first few minutes of the video, but it’s only 8 minutes total anyway.

Today we played two games, Cat and Mouse (a hit!) and Bucket Shoot and Chase.

I made little yarn puffs out of some old yarn someone gave me (while waiting at the band assessment) instead of buying pompoms, so cat and mouse was basically free.  It was fun, and the kids said they’d like to do it again.  I didn’t play for Tootsie Rolls.  We played for group points since it was March Madness. https://noboringlessons.com/dm-game/cat-and-mouse/

Thirteen kids showed up, so I had them play two zones against each other and then swap.  The missionaries were supposed to come help, but one got ill this morning.  My husband and son got to step up and run the basketball game.

I added in a 60 second one-on-one game every 5 scripture mastery passages to the bucket shoot and chase.  I think they liked it — at least no one said they didn’t. :) https://noboringlessons.com/dm-game/bucket-shoot-and-chase/