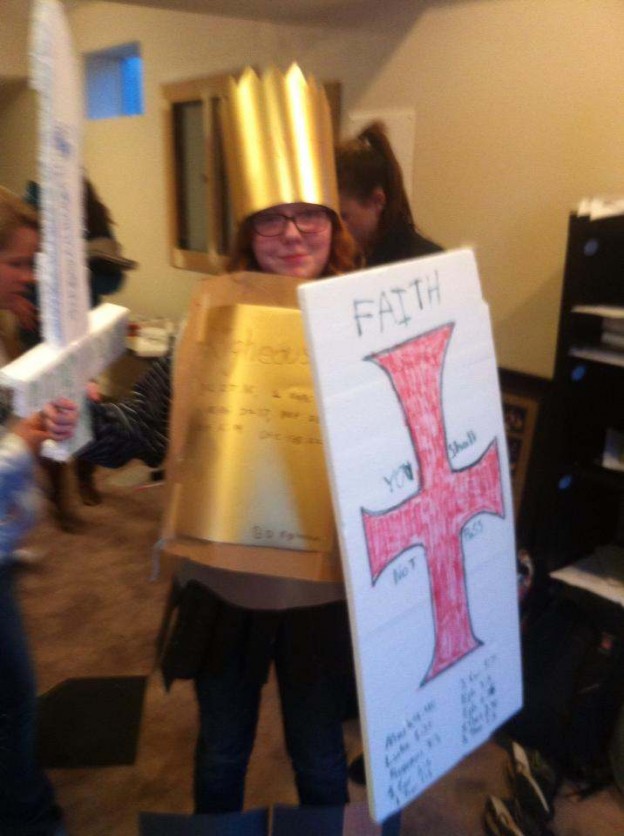 Impossibly, it snowed again Sunday night into Monday.  The weather was so poor that the other teacher and I canceled Monday’s Seminary Sunday night, well before the school canceled.  School was completely out on Monday and on two-hour delay Tuesday, so I only got to teach two lessons this week.  We have missed an entire week of class this month due to snow days.  It’s March — crazy!

Unfortunately we missed out on Fruits of the Spirit and Introduction to Galatians, so I don’t have anything really to report on those.  I may do Fruits of the Spirit later on a Free day, but we are now 3/4 finished with the year, and there isn’t likely to be much time.  When I miss a class, I can usually cover the high points in the following lesson, but when we miss two, I can’t make that much up.  It’s especially difficult this month because of March Madness, which makes our opening exercises longer.

This was our first day back to class, and I had to have several students give their devotionals to make up for the days we didn’t have class.  Each student has been giving a 3 minute impromptu talk on the topic of their choice for group points.  Some have bombed, but most did pretty well.  It’s a learning experience.  Today we had four devotionals plus opening exercises, and didn’t even give our opening prayer until 6:45.  One devotional talk went over five minutes, and would have gone on to ten if I hadn’t reminded her of the time limit.  Crazy.

At any rate, I had anticipated long opening exercises and had planned for it.  After the basic doctrines assessment, I knew that my students did not know what a dispensation was, so when Ephesians 1:10 mentioned the dispensation of the fulness of times, I knew I had my opening. I made this handout on dispensations, and used it for a 15 minute lesson.  Easy.

Today was the Armor of God.  It was another very easy lesson, and we had a lot of fun with it.  We read Ephesians 6:10–20 aloud and then discussed the verses and symbolism. After that, I let the kids group themselves and make pieces of the Armor of God.  I had some old styrofoam, cardboard, poster board, and construction paper that I put out for them to use however they wanted.  They had 10 minutes to make a piece of armor that had to be labeled and include cross-referenced scriptures.  I judged based on a 1 minute presentation on their piece of armor and how I assessed their teamwork.  The team with the most scripture references also won a points bonus.

Because teams had grouped themselves, I counted the points toward individual scores, instead of their zone bonus.

After they were finished, we dressed a randomly selected student and then everyone shot “fiery darts” (Nerf darts) at her to see if the armor worked.  Our shield of faith ruled.  They shot probably 200 darts and only hit her once.  Nice.

For music today and yesterday we used the song “The Whole Armor of God” from the New Testament Seminary Soundtrack.