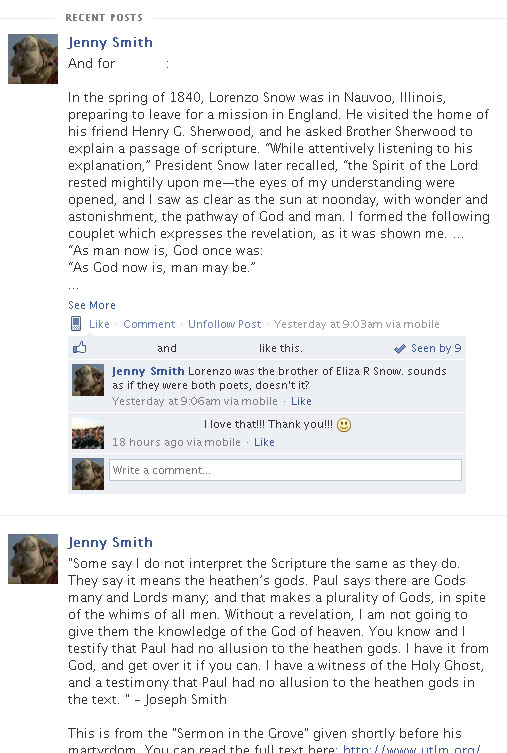 Occasionally I get a comment or email from a teacher lamenting that I’m behind them on the lesson schedule.  It may be rough for the three or four people that read this blog, but for me, it’s fantastic.  I get to see everyone else’s ideas before I need to give my lesson. But last year and this, I start to catch up with other teachers in March — just in time for the more difficult chapters. :-/ Our seminary year starts the first full week after Labor Day and continues to the last week in May.

​This has been a painful week for me because of daylight savings time.  In addition to getting up at what feels like an hour earlier, I have been staying up with my family several hours later thanks to band concerts, musical practices, mutual, lesson planning, ALGEBRA, etc.  Back in the olden days I could go indefinitely on 6 hours of sleep a night, and for a week or so on 3-5.  No longer.  I am such an old fart.

I may, in fact, be turning into my mother.

At any rate, this week has been a good one as far as lessons go.  I haven’t been planning my lessons in the big burst this week like I usually do.  I guess I’m out of the habit because of all the missed days for snow.  Wow, planning a lesson at 9 pm at night is miserable.  I hate it. I am extremely good at planning meaningful activities for the students, but I am less good at sewing it up into a well-formed lesson with a tight beginning and ending that sews it all up neatly.  I can get it occasionally, but definitely not when I’m sleep-deprived. The kids have made up for it, however, and even on the day I knew the lesson I was planning was not the lesson I’d end up giving, the kids did a great job carrying the lesson.

This was a straightforward lesson.  My goal was to teach kids how they might recognize the Holy Ghost and they would learn that weak things become strong through the Holy Ghost, weak things become strong missionaries through the spirit. We read 1 Corinthians 2: 3–5, 7–10, 12 &14, and 16 looking for ways the Holy Ghost speaks.  We also read 1 Corinthians 1:17, 25–27 and cross-referenced with Ether 12:27 to talk about ways we are made strong in weakness.  I can’t remember much about this lesson.  One student seemed touched by it and mentioned the Ether scripture in her FB status and then gave a devotional on the topic a few days later.  The kids were really droopy for a Monday.  Daylight Savings Time was hurting us all.

I had wanted to talk about our bodies being temples of God but didn’t get there.  I worked a mention into a later lesson.

I had planned to give students a chance to write questions as they walked in the door from the reading. I would choose a few of the best plus add in my own, and we’d all choose whatever questions we wanted to answer.  Our discussion would be to answer each other’s questions.  However, it didn’t turn out that way. First off, I forgot to ask students to write questions as they were coming in (sleep deprivation), and I even forgot to write the questions on the board.  Don’t know how that happened.  I was looking at my notebook when I wrote the quote….  anyway.

I had managed to write on the board the Neal A Maxwell / CS Lewis quote about “do not company with fornicators — not because you are too good for them, but because you are not good enough.” I asked the class what they thought this meant, and they were off.  We never got to my questions. One of my students’ fathers was excommunicated, and several others in the class have experience with a variety of issues, so we spent a lot of time on why it is actually kinder, as Paul teaches in 1 Corinthians 5:12–13, to remove someone from the church instead of leaving them in.  One student didn’t know what leaven and lump meant, so I had other students explain that to her.  It was a good discussion, but definitely not the one I planned.

Ever have a lesson that doesn’t go the way you expected at all?  This was today.  I shouldn’t have been surprised after yesterday, but at least I had some warning when I planned that lesson.

I had listed a couple of things on the board that I planned to cover, including some information on the plurality of gods.  This passage is particularly difficult reading, and it takes a lot of explanation, so I figured I’d get that out of the way first so that if they had something that was bothering them, we wouldn’t miss it.

I didn’t do any activity I had planned, and the whole lesson was spent with me answering students’ questions.  I had a couple of quotes that I had put in my scriptures that I shared with the class, and even the “As God once was…” thing came up that we covered in Relief Society from the Lorenzo Snow on Sunday. I had a hard time understanding this text, too, so I had read these chapters from The New Testament Made Easier Part 2.  Though I don’t always agree with the author’s commentary, for the most part, it’s very good and was helpful in answering a couple of questions succinctly. It was a pretty great discussion

I love to hear them say things like this day’s: “The footnotes made a big difference in this chapter.  I was reading along and my mom goes, ‘that’s not right’ ” Me: “You mean about the JST change of the word speak to rule?”  “Yeah.” (The JST changes that verse about women not speaking in church to women not ruling in church, FYI.) Heehee.  I’m so glad that they are learning to use the study tools — and that they TALK about it!  And when other students didn’t look up the footnotes, they realize what they are missing because a friend pointed it out instead of me.  The whole class gets lifted up by those little comments.

I suppose it’s worth posting here some information about how I use Facebook to communicate with students outside of class.  Besides the obvious “seminary is canceled” stuff, I also post information or sources for quotes that we didn’t have in class, additional details, or quotes they all liked so they can put the quote in their scriptures, whatever.  I couldn’t remember if the “As God once was” thing was Lorenzo Snow or Joseph Fielding Smith, so after class, I posted this information for the girl who asked about it.  The lower quote is because students wanted it after hearing me read that Joseph Smith said “get over it” during a sermon.  They thought that was pretty funny.

My hope is that these Facebook posts will help students keep Seminary in their minds outside of class, too, without being pushy.  I try to post only things that we covered in class or that they specifically asked for.

This was a difficult lesson to plan.  There is enough awesome in these three chapters for a week of lessons.  It was pretty hard to choose what to cut out, so I decided to focus on personalizing spiritual gifts.  I also decided to cut out the Charity discourse, because I know that those kids are going to hear those beautiful words so many times in their church careers that I didn’t feel I needed to really focus on it.  They’ve already heard it from me once this year anyway, and while we could have really had a great discussion, I decided instead to move to the last few verses of chapter 13 instead.  And for chapter 14, I included it with chapter 12 when we discussed speaking in tongues.

I planned three activities.  The first one was on spiritual gifts.  I gave students 5 minutes to choose a gift from the list in 1 Corinthians 12:8–10 that they were interested in.  It could be a gift they had, a gift they didn’t know much about, a gift they wanted, or whatever.  After they hunted a few minutes, we shared their findings in class.  This went pretty well. I worked in a couple of quotes from chapter 14 on the gift of tongues into our discussion. One of the great points we got to make was that not only does everyone have a spiritual gift, they can get/develop/ask for more.

The next activity had to do with the members/body analogy in chapter 12.  I pulled out a bottle of this crazy Buffalo Wing Soda I found at the local candy store and asked for a volunteer teacher to teach the class about that analogy, focusing on its meaning and applying it to us today.  To my surprise, one of the Freshmen volunteered.  This is a kid who was kind of presented to me as a potential problem student (ADHD, clown, etc), and so I really worked hard to set him up with certain students the first half of the year.  He did really well, so I’ve been giving him a little more freedom, and I’ve seen him go from being only focused on being the class clown to asking some really great questions and participating.  He’s still a Freshman with all that entails, but he’s made some big strides in the past seven months.

Anyway, I had planned to have the volunteer teacher go right that second with a minute or so to prepare, but he wasn’t up to that, so I pushed it off to tomorrow.  He will give the first 5-7 minutes of our lesson time tomorrow, and then we’ll go into our March Madness games.

The last thing we did was talk about the last few verses of chapter 13, which I love. Now we see through a glass darkly, but then…  Love it.

For March Madness I am doing a “playoff” each Friday so that students can work as a zone to earn more points.  Last week we missed our playoff because of a snow day.  This week we played games at tables.  I wrote a New Testament quiz game that we played with our buzzers.  It has a few problems that I didn’t fix in the online version yet, but they were manageable.

After that, I gave each student a straw and had them put in order the scripture mastery 3×5 cards I made up last summer.  Each zone had a different passage, and then we passed the scriptures to the next zone.  Each set of cards was 8 cards long.

Each team won points according to each game: