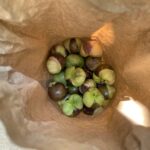 These blasted groundhogs are making me crazy. Where the heck are they coming from? Are they like cabbage patch kids — sprouting up under a leaf somewhere? For real, how can there possibly be so many groundhogs in this world?

I started a compost heap in the old cut flower bed, and two greedy groundhogs have moved in the burrow of the groundhog we trapped. They are taking advantage of my fitful attempt to be green. I have trapped the groundhog(s?) twice over the last two days, but it(they?) have escaped both times:

The rose cutting I tried to start has shriveled up and looks like a Slim Jim. It’s too early for that business. I will bend the soft canes over today and try to start that rose closer to the trellis. The clematis seems to be alive still, or at least it’s not obviously dead:

I picked some more of the tomatillos. I think I have enough now to take a stab at making some sauce:

The carpet rose is back in bloom again. It’s a really great plant:

I cut the grass yesterday and pruned some of the dead stuff off the tomatoes, but did not spray. I’ll have to do that today. I think that the yellow pear has late blight. I pulled out both Brandywines yesterday because they were wilting. The roots look good, so it’s foliar disease that got them. I didn’t pick any ripe tomatoes, but there are tomatoes coming again on the Cherokee Purple. I’ve got to save seeds from those. They have been amazing! Del’s plants look good and I see fruit coming. The Marvel Stripe has put on a few fruit, and I had a big one in my tomato salad for lunch yesterday. Marvel Stripe has a really thick skin that’s a little off-putting. It’s kind of leathery. It tastes good but not great to me. I can live without it next year.

The squash plants look okay, but I still don’t have any squash. At least they haven’t rotted again yet. I will treat them again with the rot stop to see if that helps. I think they are happier without the sun cover blocking the sun, too. I’ll have to rethink where I put that next year (if I use it).

I need to figure out if I should wait to pick the bush beans until they are swelling or if I should pick them at a baby-er stage. Google?

I’m still getting Sieva Lima beans ready to pull every two or three days. I am letting some pods go to seed so I can plant more of those next year! They have done well and taste good. I just wish I had more.

Confession: I’ve not been taking good care of my carrot seeds as I’ve been a little neglectful of the garden lately. I’ve not been keeping the seeds moist, and as I mentioned before, I accidentally left them in the hot car trunk where they may have been cooked. I am waiting with bated breath to see if they’ll sprout or not. Apparently it takes up to three weeks for them to sprout and they have to stay consistently moist. I’ve gotta up my game. The trouble is that if they don’t sprout I won’t have time to replant before winter. Maybe if none have sprouted by the end of next week, I’ll replant.

Today I’ll try to come up with a planting plan to for Fall. Im a little nervous to plant because when Jared put in the water post last weekend something happened to the water pressure in the garden. He is not sure whether it is something in the line or if his plumbing caused it, but irrespective, I don’t have good water pressure in either my hose or for the motion-activated sprinkler. Both function — they’re just wimpy. I moved the sprinkler yesterday so that I could cut grass, and today I’ll set it up again.

There’s a lot of work to do in the garden and yard, but Jared is out of the country for two weeks. He literally just texted me from Poland to say that the groundhogs are in the garden — and they are, but not in my cage. Arg. The little pests! I will let them alone for a little while to see if they go in.

It has been a constant battle in the garden this year, but it’s been one of my best years. Sydney made another quart of sauce to put up yesterday, and I had a truly decadent, huge bowl of fresh tomatoes with mozzarella, basil, salt, and pepper for lunch yesterday. The tomatoes were at peak ripeness and were truly out of this world amazing. I quipped that they were so good, maybe I’d start believing in God again. Jared didn’t appreciate my joke, and really it was a little lame. I do believe in God, just differently. I realize I have a definite slant that way, and perhaps I’m just calling whatever I don’t have an immediate explanation for God, but I feel okay about it. Being wrong either way isn’t a biggie. I’m not rebelling against Him or His laws, and I find them more protective than prescriptive. I’m okay to sit in the uncertainty for a while.