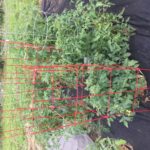 That Dern Deer has not shown its face since we put out the repellants. That’s five days deer-free. I’m hopeful this will keep the pest away, at least until I get some tomatoes. If pests were to be spotted in such gardens, companies like Alpha Pest Control can be your go-to.

I spent the morning pulling weeds, trimming off blighted leaves from my tomatoes, pulling out the remainder of the kohlrabi, checking for bugs, and pruning suckers from the crape myrtles. I also planted the scarlet runner beans from my friend — they are HUGE! I soaked them overnight, and each bean was as big as the top knuckle of my thumb, and all brown and beige speckled. Crazy. She swears by these, and I hope I’m able to get something out of them.

I read that icicle radishes keep away squash beetles, so I think I’ll plant a few next to my squash. I’ve also sprinkled some diatomaceous earth around the base of each set, and I splurged on a $1 sick geranium from Lowe’s to see if it may help. I planted the new yellow pear tomato. I hope it’ll do well and replace the sick Better Boy.

I realized that the stuff I sprayed Monday — the Infuse and dried up (bad) mancozeb — was the wrong stuff. Infuse was for my roses. The mancozeb was too old to be helpful. Oops. I did some reading on controlling blight and leaf spot. There was a great article from the Mississippi State Extension Office by an entomologist saying that he sprays with Permethrin, Chlorthalonil (Daconil), and Copper Octanoate (Bonide Copper Fungicide) in concentrate form for his garden because each of these can be sprayed one day and you can harvest the next. With mancozeb you have to wait five days (not a problem for me yet).

I also read a really helpful slideshow from the University of Tennessee talking about how commercial farmers must update their spray schedules to account for blight. That article listed Chlorothalonil as a level 3 killer for blight. It lists three other fungicides as level 5s. When rotated with mancozeb, these super powerful fungicides resulted in less than 1% coverage of leaves with blight. These fungicides also have a 0 day spray to harvest wait, which means you can spray and harvest on the same day. They are Inspire Super, Fontelis, and Priaxor. I googled for all of these, and they are super expensive — running over $150/bottle — and it’ll make way more than I really need. I couldn’t find any mixtures of this stuff for home gardeners. I’m sorely tempted, however, to cough up the money and get some since I know for sure my plants get leaf spot and blight every year now.

After it took an entire bottle of copper fungicide to spray only the biggest of my tomatoes today, I decided to go on the hunt for some concentrates to mix. I found the copper fungicide and Sevin concentrate easily, but I ended up spending 3 hours today traveling all around Fredericksburg and Spotsylvania and Stafford looking for mancozeb. Nobody has it since Roxbury Farms closed. I finally picked up the very last bottle at a farm supply in Fauquier county near Morrisville. My cousin and her CL husband live in Morrisville, so I decided to drop in on them. They weren’t home, but I took a tour around Claude’s garden. He’s a farmer by trade, and Betty has always kept a garden, too. This is what it looks like when someone knows what they’re doing:

It was a pretty day today, so after I ran errands I came home and took these: