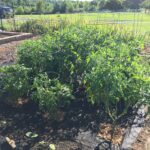 Today was my weekly Wednesday garden spray, but I decided to give the plants a rest and did not apply any Miracle-Gro this week. I want the tomatoes to be able to put their energy into ripening some of these green tomatoes instead of making leaves, and I think it’s probably a good idea to give them the occasional break anyway. I read that beans do better without fertilizer after they get a couple of leaves, so I’m leaving them alone, too.

This was the first week I sprayed with the new tank sprayer. The copper fungicide is a fun blue color, which belies the insecticide I added to the mix. I had planned to put some mancozeb in with the spray, but I read the label and it freaked me out. Wear long sleeved shorts and long pants. Waterproof gloves (I don’t have any). If your clothes become saturated throw them away. Wash clothing separately.

Confidence was not instilled.

I mixed up the Sevin and fungicides and sprayed the tomatoes and roses until the tank was empty. 1 gallon did all the roses to runoff plus the climbing roses and most of the carpet rose. I saw a Japanese beetle on the New Dawn rose and smushed it since I know the insecticide I’m using won’t hurt them. I don’t have a lot of Japanese beetle damage yet, but I ordered some Pyrethrin concentrate that will arrive today. I will probably spray that later in the week.

I’m usually skeptical of organic treatments, but this copper fungicide is the real deal. It is keeping the blight and remaining leaf spot well under control.

Here’s the tomatillos. I added about two inches of soil to the pots the other day because I think they may need a little extra space to grow roots since there are two to a pot and my pots are a little undersized. Yesterday I came home and could see that the lower leaves were wilting. When I saw how dry the soil was, I quickly watered them. They are looking much better today:

The beans are doing well for the most part. I’m having trouble getting the Greencrop beans to sprout and stay alive. I don’t know why they are shriveling up. It’s mostly on one end of the garden that gets a little more morning sun, so it dries out a little faster.

The pole beans are doing great! The Lima beans took off this week, and now I have two bean plants that are halfway over my 16 foot trellis. There are several more that are over 4 feet now, and I’m also seeing some blossoms. Hooray!

The scarlet runner beans are super plants! The seedlings that have sprouted are only 5 days old and have huge leaves. Some of them are three inches tall! They are amazing! I can’t wait to see what they do!

The squash are doing well on the end that gets the most afternoon sun. The plants closes to the tomatoes look shrimpy. I think I put too much diatomaceous earth on the plants earlier and ended up stunting them. I replanted butternut squash on that other end, but I am not sure they will do anything. I think I am planting far too late to get any winter squash. I may just plant more zephyr.

Wild and domesticated blackberries are about to be on!

Sydney and I spent over an hour working on the weeds in the largest of the iris beds. I read that it’s a good idea to cut off the seed stalks, so I did, and with the weeds gone, it looks tidier. I cleaned up the area around the new clematis on that side of that trellis. The zinnia has had a little more insect damage, but I’m hesitant to spray too much since my neighbors’ honey bees are attracted to them. I’ve done a little more weeding, but the English garden still looks a little wild. I love it though.