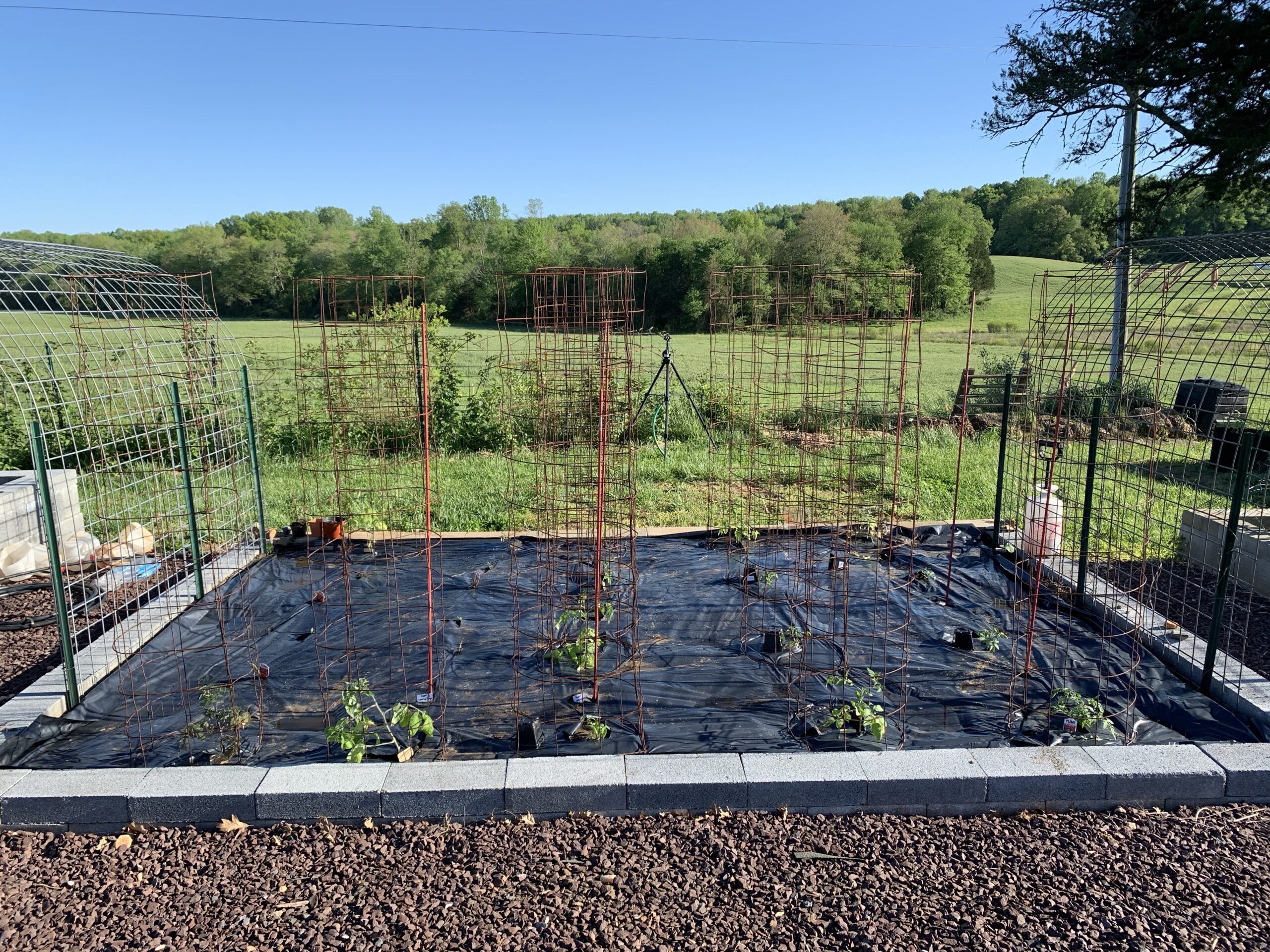 We are back home from our last minute vacation to Orlando celebrating Sydney’s completion of three semesters of college and Jared’s new job, and so it is time to bite the bullet and finally put my tomato plants in the ground.

My tomato buddy, Del, babysat my plants while I was gone, and he helped them stay hardened off by keeping them in the sun on his deck except during the windstorm we had yesterday. Today, after buying six replacement plants for the ones that froze, I picked my homegrown plants up from him this morning and went to go pull up and replace the dead plants. To my astonishment, all but one of the plants had new growth! The Green Goddess tomato that was looking so sickly and that I just planted out rather than look at it any longer is looking great! If I didn’t know GG had freeze damage I wouldn’t believe it. I’m shocked GG is doing so well, especially since I didn’t even harden it off at all!

I decided that if those frost burned tomato plants wanted to live so badly, I better just go ahead and let them keep growing. With those zombie plants and the new ones I bought today and the two new ones Jared picked out for himself (San Marzano and Heirloom Green), I ended up with twenty-six tomato plants without even trying! Oops. So much for all that effort trying to limit myself to just twenty plants………

I put out the tomatoes without any fertilizer — lazy — but I did put down the plastic to keep the weeds down somewhat. It took a little finagling to get the irrigation lines put in, and I ended up adding an extra row to the garden that was not part of my initial plan. That meant I have five rows of four tomatoes each, which is a lot more crowded than what I did last year with four rows of three, plus a row of tomatillos. I hope that this will not make the tomatoes very prone to disease. Last year I did great disease-wise, and I blamed it on the plastic, spacing, and aspirin. This year only certain plants have aspirin, and all the plants are very close. It will be interesting to see if the spacing does affect the disease issues more this year.

I also planted out the squash plants which now have several true leaves on them. I’ve got three zephyr squash plants and one Cocozelle di Napoli out there in the straw bales. All of the patty pan squash I planted germinated, so I ended up with eight of those plants. I don’t even like patty pan squash — I’m just growing it for Del because he doesn’t have space — and so I planted four and I’m trying to give away the remainder. I also put out all four cells (about 6 plants) of Waltham’s butternut squash. They were looking a little droopy and dry when I planted, but I think they will perk up with some water.

I planted eight cells of Lunchbox Orange sweet peppers for Jared, and I ended up with thirteen plants. I planted them out in twelve spots, between the tomatoes, and I hope he will have plenty of sweet peppers to enjoy this year.

The peas are looking great, and the Brussels sprouts really took off while we were gone. I am now starting to worry that they will crowd the still tiny kohlrabi too much!

I don’t remember if I wrote about it before, but I saved some Cherokee Purple suckers from the zombie plants before the frost as backups, and three of the four lived and have new growth. I potted them up today, and I’ll probably end up giving them to Del. He didn’t start any tomatoes from seed this year and he’s relying on me and the store for his plants. He did direct sow a couple of varieties last week, and those have come up and are looking good.

Anyway, here are some of the Cherokee Purple clones (One may be a Dancing with Smurfs):

The azalea bush came out, and the early irises look nice: