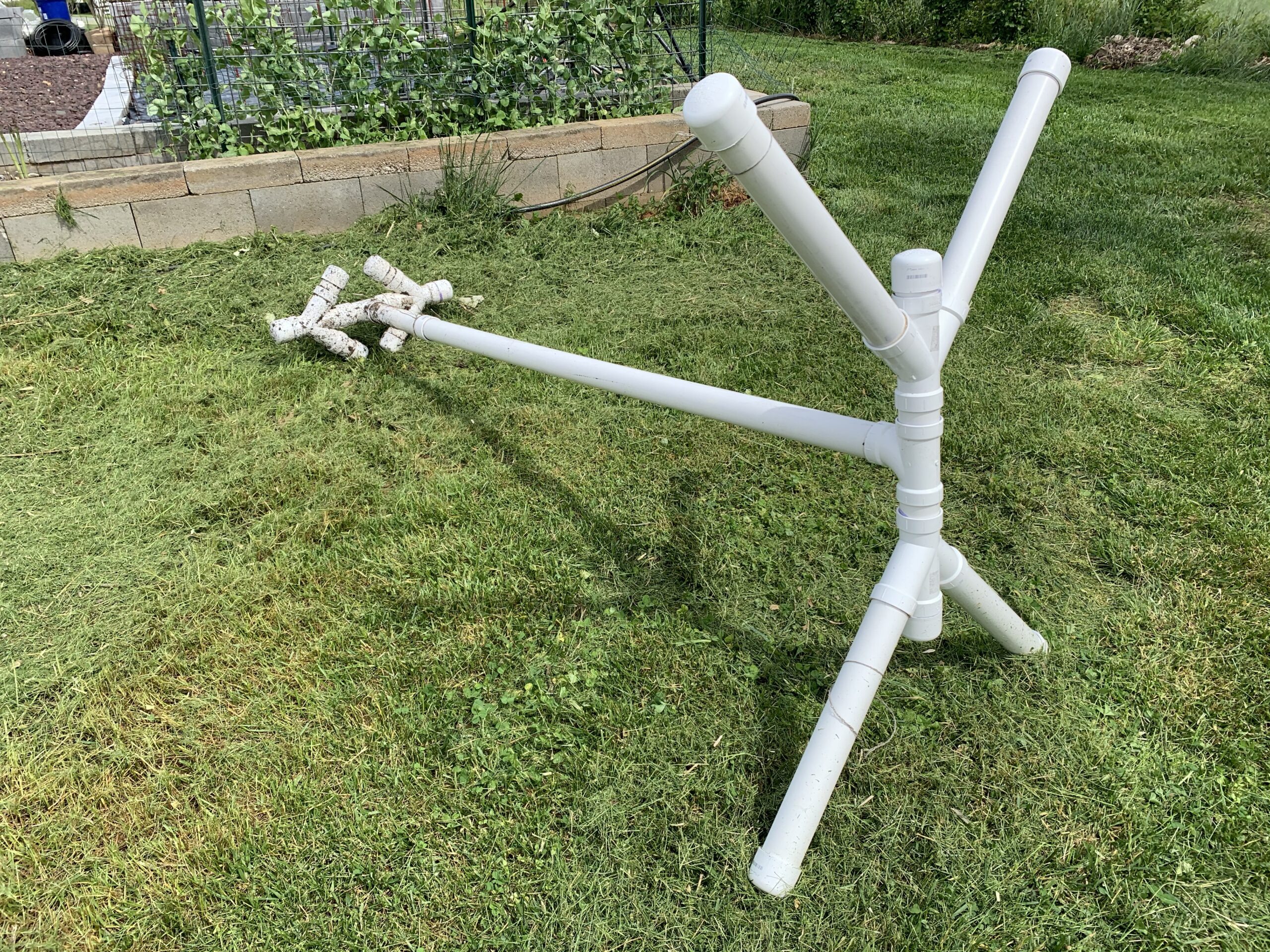 This, right here, is why you don’t allow an electrical and computer engineer to build your prototype cucumber trellis unsupervised:

What I drew was simple — a pvc post with two Xs, one at top and one at bottom. I explained that the bottom should be filled with concrete to keep the trellis stable in the grow bag where I intended to plant cucumbers, and there should be a joint at soil level to attach strings to for the cucumbers to claim.

Five way junctions exist. He just wouldn’t wait the three days to ship two in and instead built this. Okay. But (without measuring) he assumed that the base he built wouldn’t fit in the grow bag and made whatever that base is that looks something like the <> mathematical symbol for does not equal. And it did not equal my concept or a stable base. Obviously. Yes, this trellis was every bit as wobbly as it looks (to anyone who isn’t a computer engineer, apparently.)

The initial design did not have the junction I asked for. He didn’t fill it with concrete as I asked. It was just … this. A few days later when the first breeze kicked up, it blew over, of course, and snapped in half at the soil line (which is when I found he hadn’t filled the base and vertical pipe with concrete and the base looked like chicken feet suffering from knock knees. I was pretty hot. He flat out refused to pour concrete in the base, but I finally got him to at least fill it with water, and I ended up with my pass through connector after all when he repaired the broken trellis.

It never did grow much of anything:

But the concept worked in theory. Cucumbers were easy to pick, and I didn’t have to rummage around in scratchy cucumber leaves to find fruit, but I think the soil may have stayed too dry and the wind and wobbly stand affected how well the vines grew. I would like to rebuild the base and try this again some time, but this year I have put corn in my spare grow bags to see what will happen, which means I don’t have space in them for cucumbers.

As I was writing this, I had an idea! I’ve planted a clump of cucumber plants in the leftover straw bales from last year. I have an old bit of fence there I was going to use as a trellis, but I wonder if I could bury that pvc trellis in the ground and try it again? I could actually try all three trellis methods at once……… hmmmm. Maybe I can make this franken-trellis work after all!