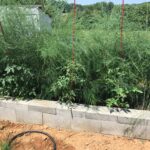 The thing I hate most about gardening is thinning. I always want to keep all the plants alive — if they got started, the little fellas deserve a chance to live and try to thrive! I try to avoid thinning whenever I can, but today I had to bite the bullet and thin out some of Del’s tomatoes. I pulled 9 tomatoes, most two or three feet tall. They were all kind of spindly from being in the shade right up against the asparagus and didn’t get much root when I pulled them up. I hate to see them go to waste though, and I planted three of the biggest in the pots that I had filled with garden soil at the beginning of the summer. I put them in deeply and watered well, hoping they might take off.

I took the others down to Aunt Sally Lou’s and put them in around the house. It was good for her to get outside. I told her they have to be watered every day for the next two weeks to try to get them established. I planted those deeply as well hoping they might grow some roots and stay alive. ASL’s planted tomatoes earlier out by where the old apple tree used to be but a deer has been eating on them. The ones planted inside the fence and up close to the house ought to be more protected. They have a *chance* to live, albeit slim.

ASL was asking me about squash — she loves that stuff! I have got flowers but no squash coming yet. I put that in later than everyone else, but I did follow the instructions… maybe the varieties I planted just start later. The squash plants are looking better now, to my relief. I think they just got overwatered earlier.

I spent about an hour tying Del’s tomatoes to stakes and stripping fronds off the asparagus to make it a little easier on the tomatoes growing there to get some sun. They face east and gets probably 5 hours of sun right now. Ideally they’d get more, but they seem to be doing okay as they are. Some even have tomatoes already and almost all his plants have flowered.

The other tomatoes are looking good. I have two more Cherokee Purple that are ripening, plus another Celebrity that will be ready soon. The Romas I photographed yesterday are much redder today. I had to pull five or six green Better Boys that had blossom end rot. That one plant has had a rough go of it this year. I stripped off most of the dead leaves from everything, but overall the plants look okay.

I was reading about Black Cherry tomatoes yesterday and discovered that I’ve been pulling them before they are totally ripe. I will have to wait on this next batch and see if I can get them a little riper before I pick. I love the taste of the semi-ripe Black Cherry so much I am excited to try one that’s fully ripe!

The shade cloth is keeping it cool underneath. It cooled off yesterday, but it’s up above 90 degrees again today, so I think/hope having the shade cloth will keep me producing throughout the worst of the summer heat.

I sprayed today with Copper Fungicide (I am converted) and Sevin. I also watered with Miracle-Gro, but I put the crystals in the spray feeder to make it a little easier on me. I sprayed the beans with more Sevin. I have had much more insect damage since I’ve been staying on the spray. I’ve also not seen any more squash bugs or even Japanese beetles. Maybe it’s too early for them yet, or maybe that pyrethrin I sprayed helped. Either way, I’ll take it.

I’ve been thinking that I made a mistake his year when I picked out tomato plants at the store. I picked plants with thick stems that were a little squatty. Unfortunately, that means the leaves were on the ground and they got lead spot early on. Next year I’ll either start my own from seed — those are naturally more spindly — or I’ll do a better job picking taller plants that can be mulched around.

Next year I think I’ll do at least four types of cherry tomato. They are so easy to grow and so prolific that they are a super great choice. I am happy with the varieties I picked this year. Husky Cherry Red and Black Cherry will definitely make it next year. Yellow pear probably will, and I’d like to do Juliet or a roma grape. I like the colors of the different cherries. They make a pretty salad or pasta.

The beans look great! I can see several little tiny beans coming on the bush beans and pole beans. The Sevia has caught up to the Garden of Eden and they are really filling in on the trellis. Every day or so I have to move or thread tendrils that are running amok. Some of the Scarlet Runner beans are two feet tall now. I think I’ll have beans from those come mid August. If they’re good, I’ll move them to the other side of the trellis and try to let them keep coming back each year.

I need to sit down and make a plan and planting calendar for my fall garden. I really want to get some Kohlrabi!

I’ve also got to have Jared put in a yard or two of soil to get the walkway up to the level I want it before we put down the gravel. I am relieved to have that project done. I want to put in the hedge plants, but I think it’s too hot. I’ll wait until later summer to put them in.

Miraculously the weeds aren’t ahead of me this year — the landscape fabric has been a win. I will do that again next year for sure.