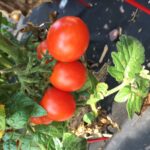 I admit I’ve been avoiding the garden a little bit out of guilt for burning the plants last week. I’ve been out to check for additional deer damage and such, but I’ve not made any attempt to do anything other than that. Today I went out and found that several tomatoes had turned red, seemingly overnight!

Jared put in my new shade cover for the tomatoes, and he’s been working on leveling up and filling in the space around the asparagus bed:

And look at the beans starting to grow!!!

Here are some more pictures of the flowers. There were a lot of butterflies, bees, moths, and ants on the plants today:

The tomatillos are looking good. I did some reading, and fruit does form inside the husks. I can pinch the larger husks and feel the little tomatillos forming now. They are about the size of marbles:

The blackberries are on. We’ve been enjoying them for over a week now:

And the mint that I near about killed from not watering came back. Phew:

I’m seeing blossom end rot on some of the Better Boy tomatoes. I know my soil has plenty of calcium, but I will get some spray and try to salvage them. I imagine it’s the hot weather and random storms we’ve been having that are causing the problems. I was not able to get all of the Cherokee Purples tied up off the ground the other day, and some may be rotting. I have propped them up to try and help. There is also something bug damage on some fruit, but I’ll cut that off. Overall I’m pleased though! Despite my bumbling the plants are doing what they’re supposed to, and I’ve got enough tomatoes for a meal now!!!

In other news, I asked my friends on Facebook about the creepy growth on my tomatoes. They all agree it was something called “slime mold” or “dog vomit mold”. They said I could just scrape it off, but that it wasn’t hurting he plant. I was super relieved that it wasn’t some giant nest of three million spider babies or something. I did scrape it off, and this is what it looks like now: