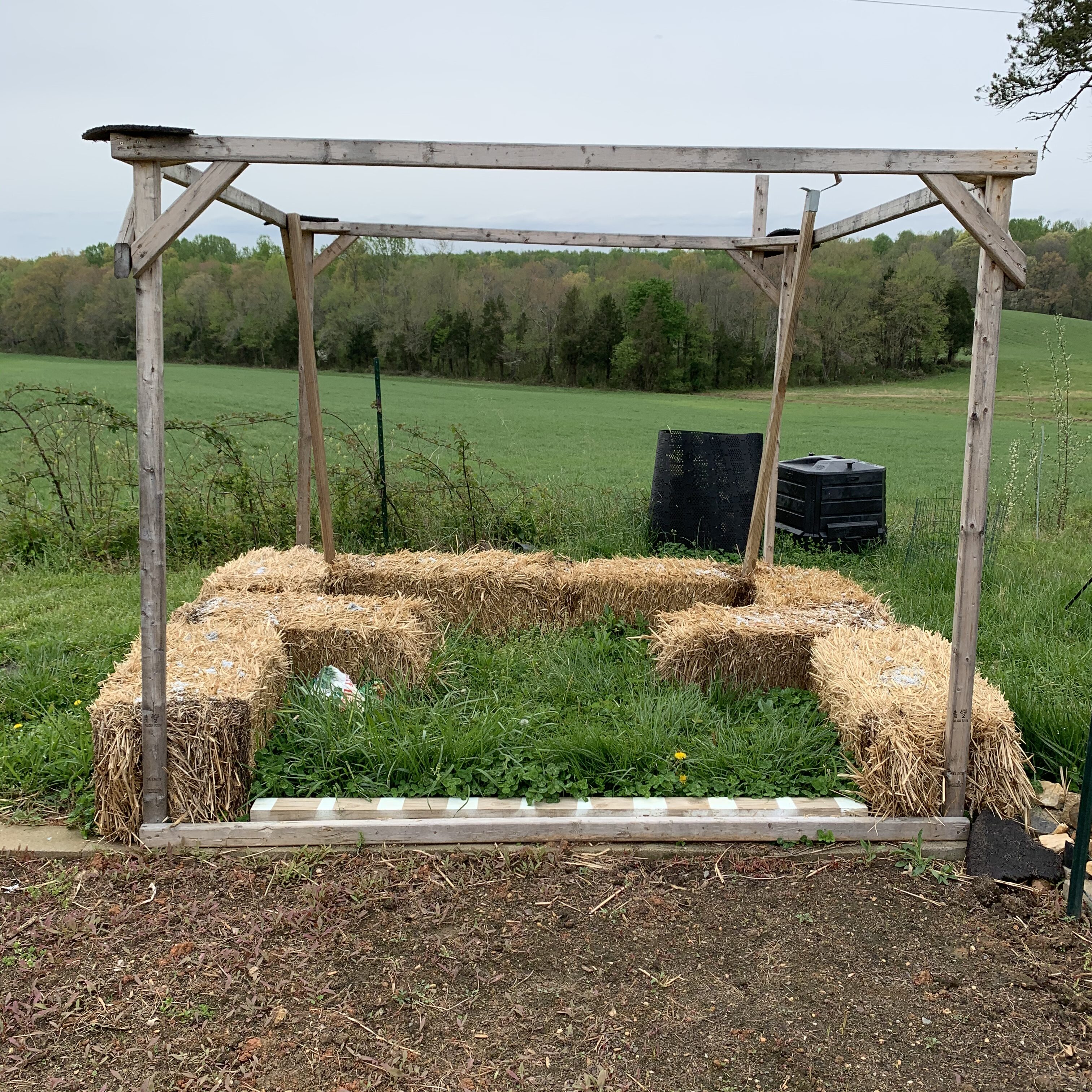 Well, it’s a week later than planned thanks to Sydney’s Zoom birthday and Caleb’s Zoom wedding, but today I started to season the straw bales. It should take about two weeks for them to be ready for planting. I didn’t bother to try and water them in — I’ll rely on the rain that’s coming this afternoon to do it for me:

I can’t remember if I said this earlier, but Jared set up the straw bales under the shade structure we built last year so we can use it to support plants using the Florida weave. That’ll save me some money in tomato cages since the weave only requires sturdy posts and some twine. I’m going to put tomatoes in line with the uprights and something else, like maybe tomatillos, on the little parts that stick toward the middle of the grass. I’m going to add in some more support in the middle of each row because I know the weave won’t be able to hold up five full grown tomato plants.

We did have a plant emergency when the New Dawn rose bush on the walk through trellis sustained damage during a recent wind storm. Tragedy! Winds were gusting over 50mph, and one main, woody branch about two inches thick split and flipped over at a y-joint! When I discovered the damage, I quickly read about how to repair rose bushes online, and Jared raced to the hardware store to pick up tree tape and a spool of twist-tie wire. The wind was still blowing pretty hard while we worked, and it was getting dark, so I held my phone and the thorny bush while we worked. We got it tied up, and I added several more support ties throughout since I could see where other ties had broken but the branches hadn’t yet. It must have worked — the broken branch is still alive and it’s looking as good as the rest of the bush:

My pruning and training in February has paid off, and the bush is filling out very nicely. I may have to cut it back next year to keep it from getting too bushy next year, which is a great problem to have. The new New Dawn bush on the other side of the trellis is just over a foot tall now. It’s looking very happy in its spot:

I’ll begin training this rose to the trellis by the end of this year, I expect. So exciting!

Since none of my clematis starts took last year, I broke down and bought two Jackmanii clematis plants. I have a clematis that I love on the side that’s currently open:

But I haven’t been able to identify it or propagate it, so I decided to just give up and buy Jackmanii because it’s the most well-known clematis for pairing with New Dawn. I bought two, and I haven’t decided where I’m going to plant them. I may keep trying to get the maroon one to spread, or I may put Jackmanii on that side, too, and let them fight it out. So many decisions!

The plants on the side of the clematis trellis closest to the house has been growing like gang busters:

… while the plants on other side of the trellis look terrible. They are slow growing — a third the size of the sister plants on the other side — aren’t leafing out, and they are barely even budding out while the other side already has leaves. I read online that clematis prefers shady roots, but then also read that was a myth, so I ignored the advice. However, the sick side of the trellis faces south and gets full sun, so I decided to try out the theory on shady roots despite conflicting evidence. I used some grass clippings to mulch around the clematis on the sick side to see if shading the roots and keeping them a little more moist will help. This is the first time I’ve ever tried grass clipping mulch. It’ll be interesting to see how it works. I hope this intervention will help those plants catch up to their crosstown rivals.

I cut asparagus yesterday, but there’s already more to cut:

The scarlet runner beans I sprouted seem to have survived the two frosts we had this week— at least some of them — and they are breaking the ground:

The peas are looking good:

The first irises are blooming:

I can’t actually remember planting that yellow iris. It must be one I got in Richmond last year. They are HUGE. One flower stalk is up to my shoulders and another is up to my chest. Crazy! It’s fun to have a new color in the garden.

Here are some more random pictures of the garden: