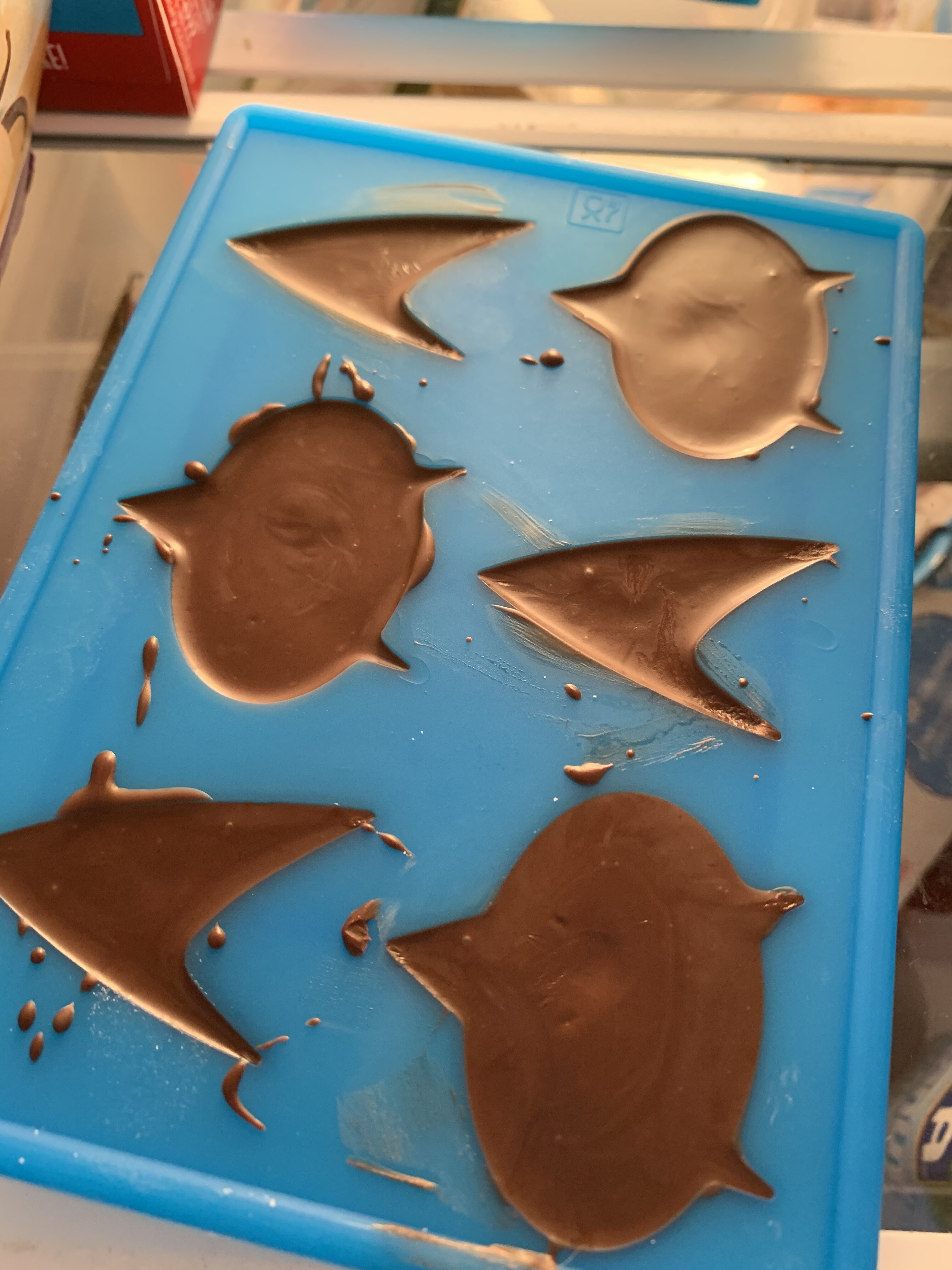 I think it’s been a year now since I called up a group of friends From church and invited them to come over and watch Star Trek Discovery with Jared and me. We dressed up in our fan cool t shirts, made themed food, and had so much fun we decided to make it a monthly thing. Sometimes we end up solving all the problems of the church, but usually we watch 2-4 episodes and enjoy nice some friendshipping.

I suppose it’s a little pathetic, but after getting burned very deeply when a close family association recently ended, I just holed up to lick my wounds. It took a long while to get brave enough to have people over to the house again — we used to have friends over very often — and I didn’t actually know some of these people very well when I invited them to the watch party. We’ve since become good friends, and it’s bolstered my confidence in others and myself.

I took some pictures of some of our foods — some of them are super great!

I don’t have pictures of the food cubes (Jello Jigglers), Hasperat, Sumerian Sunset, Gagh, or Romukan Ale (Blue Raspberry Lemonade), but as you can tell, we have lots of fun with the food.

I’m going to post some of the how tos for the things I made below in case someone else would like to replicate (see what I did there).

I admit it: I didn’t read the instructions that came with my cookie cutter (purchased from Warp Zone 3D Prints), and I tried to make the Cookies with premade sugar cookie dough — you know, the kind that comes in a tube. Well, it didn’t work:

After this disaster, I humbled myself and used the recipe from the instructions. I didn’t love it, honestly. The Greek yogurt taste was too strong. It did grow on me, but Find another cut cookie recipe. Warp Zone’s one isn’t the best. I also picked up some ingredients to try to decorate the cookies — fondant and food markers:

The cookies friend out well, but the fondant ones looked the best. The markers did not add any flavor. The expensive Michael’s brand and the Walmart brand tasted the same and worked as easily as far as I could tell:

The markers work just like regular markers. You can get pretty even coverage if you color lightly and evenly in one direction with as long strokes as you can handle. Try not to overlap your marker lines.

I have never used fondant before, so if this is wrong, don’t hate. It worked for me, and the fonts at stuck to the cookies fine:

Hopefully you won’t feel like this when it’s over:

How to make Star Trek Chocolates

These were stupid easy and stupid fast to make. I bought the silicone molds on Amazon. I humbly admit that I am a total chocolate snob, and so I’m super tooky about chocolate. I bought Ghiradelli’s dark chocolate melts, and I was happy with the results. The Ghiradelli’s is smooth. If you only like really dark chocolate you won’t like this, but it’s a nice middle ground in between dark and milk chocolate.

The first batch I did turned out perfectly. The second batch I melted for about 20-25 fewer seconds and it didn’t turn out as well. Sydney says it didn’t temper right, whatever that means.

Some of the molds have some fine details, and they all broke at least a little bit. I used some edible glitter spray to add gold details. I found that two spatulas and an iced tea spoon worked well as masks for the communicator badge mold.

If I were doing this again, I’d probably only make the communicators because they turned out the best, and I might leave off the paint. It looked good, but it wasn’t essential to the overall look. One bag of Ghiradelli’s chocolate melts made 15 1/2 chocolates.