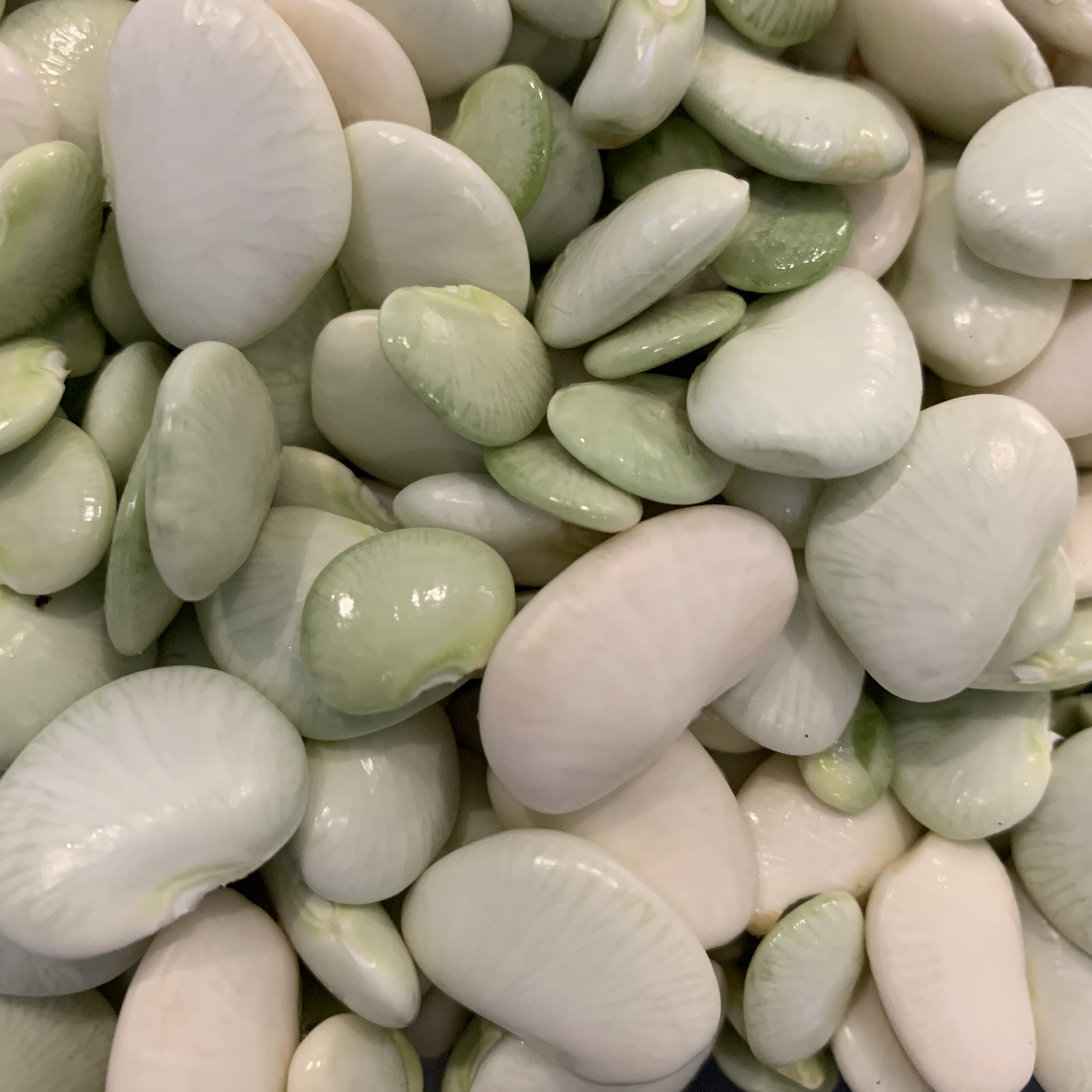 My daddy sent me a packet of Sieva Lima Beans this spring because he read that they were Thomas Jefferson’s “favorite”, and since I live not too far from Monticello, he thought they might do well. All I can say is WOW. This is a fantastic, hardy, prolific pole bean here in Zone 7b Virginia. I liked it so well I saved seeds to share, and I’ll grow it again.

According to my records, I planted these beans on May 17. I soaked the beans overnight (not all swelled, as you see in the picture), rolled them in a bean inoculant (the black powder), and planted according to the directions. I don’t remember offhand, but usually it’s twice the size of the seed, so it was probably about an inch deep.

I planted 12 seeds. There are about 8 plants on the raised side of the bean trellis and 3-4 filling in on the tomato/bush bean side where I filled in where Garden of Eden didn’t grow. The trellis is made of two 16-foot cattle panels bent into an arch shape. At the bottom the panels are about 5 feet apart, making a nice pathway. The arched cattle panel helps make picking easy, and it saves space in my small vegetable patch. One end is in the main patch, and the other is raised up about a foot off the ground at the end of my long cement block asparagus bed. I’m 5’4”, and the trellis is just barely too high off the ground in the middle for me to reach the top-most beans comfortably. My 6’ husband has no trouble reaching the top.

Now, I like Lima beans, but I have never grown them before and didn’t know what to expect. Here’s what happened throughout the year:

They sprouted just fine, and grew like gang busters. At first I wound them on to my cattle panel bean trellis, but after a while that proved unnecessary:

By July 22, the beans were yellowing, and had some bug damage. I tried watering, but it didn’t help. I switched to pyrethrin for the Japanese beetle damage and eventually sprayed them with some Miracle-gro. That did the trick. I fed the beans a few more times throughout the year, but the first feeding was the most helpful.

By the end of August, I was pulling enough beans for a meal for our family of three every two weeks or so. Peak production was reached in early September.

The thing that surprised me the most is that after the flood, all of the Sieva Lima beans That I had planted on that side of the trellis came back, while Garden of Eden almost totally died out. Sieva lost leaves and then started growing new ones, even blossoming and producing beans that I pulled yesterday (Oct 18). It was straight up amazing. So yeah, when I say they’re hardy, I mean it. Sieva is a tough bean.

Today I shelled the remainder of the beans that we pulled yesterday before the frost came. I had been letting some of the pods dry on the vine, so here’s what I got for about 3 weeks’ late summer production. That’s about 1.75 cups fresh and another cup of dry beans, from what I think is a total of 12 plants. Some of the earliest plants ended up growing back down the trellis to be about 12 feet tall total.

These Sieva Lima beans put on just the right amount for us — I’ll definitely plant them again next year.