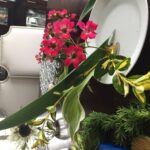 Ever since I first saw one of those gorgeous Japanese flower arrangements, I’ve been wishing I had access to flowers and knew how to do it. Well, with all this free time on my hands lately, I’ve been able to spend a few hours studying up on it. It turns out that now that my landscaping is pretty mature, I’ve got most of what I need to make beautiful arrangements right in my own yard!

In this article you will find tips for fire safe landscaping specially for those who live in areas where fire is very common like California.

It turns out that the secret to those gravity-defying ikebana arrangements is a metal pincushion thing called a suizan. A suizan is basically a heavy chunk of metal with little brass pins poking out of it that you use to hold the flowers in place. One goal of your ikebana arrangement is to keep the suizan hidden, so you don’t want your suizan to be too large for your arrangement. That also means that your flower arranging space might be limited to an area as small as one inch!

After some researching, I ordered several different sizes of suizan, from small to medium, at AliExpress. I didn’t want to wait a month to start playing around with it, so I also ordered a sun and moon suizan from Amazon. These can double as one large figure eight shaped suizan, or as a sun or moon piece separately, or you can use one of the pieces as a counterweight if necessary for a heavy arrangement.

One of the best things about ikebana is the crazy vases. I don’t have anything like that, and they’re pretty expensive, so for now I’m just going to stick with what I already have around the house.

My suizan came in the mail, so today I decided to try my hand. I am pretty bad at it and am not following all the special rules yet, but it was SO FUN to pick random stuff out of my yard and arrange it into something (kinda) pretty.

And I also made another in a small serving tray: