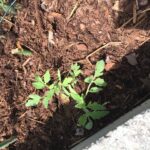 I put in the tomatoes from my friend, Del, this morning. I ran out of potting soil and had to go get more. It took 4 bags to mostly fill the growing bags he gave me, and I could have put most of a fifth if I had wanted to.

On the end of the asparagus bed closest to the house I put in two pots of “Giant Mix”. Whatever comes out of those does. I don’t think I’ll even try to thin them :)

I started soaking the beans yesterday. Not all of them absorbed water and some remained small. I don’t need many more plants to fill in, so I went ahead and planted anyway instead of waiting for them all to swell as I did before. It was the same with Garden of Eden and Sevia — not every bean swelled. I inoculated and planted 10 of each bean, I think.

The baby leaves on the Garden of Eden nubs are definitely growing, even despite yesterday’s storm:

I harvested our first few sugar snap peas today! These are not as sweet as some we’ve done, but they’re okay:

Yesterday I got some new Round Up and Ground Clear and then sprayed for weeds all over the place. Stuff was dying just a few hours later, and lots of stuff is looking pretty sickly today. Jared went to Newton’s and got a truckload of garden soil to put down on the low spots in the garden patch before I plant the squash and bush beans, which may happen today. When that’s done, I’ll be totally finished planting for this season.

Update: I put in the squash and bush beans. I did two spots of Zephyr, Delicata, and Butternut. Zephyr is closest to the house and Butternut closest to the kohlrabi WHICH IS STILL BEING EATEN! I looked under the leaves and there are little tiny 1/4 inch caterpillars eating the best plants! Arg! Time to get out the chemicals…..

I also did the bush beans. I planted about 7 feet of Jade closest to the blackberries, 3-4 feet of Greencrop near the house, and 10 feet of Roma II nearest the bean trellis. The package said to get out a ruler because it was so very important not to plant deeper than 1/4 inch for beans. Ha. Ha. Ha. I planted them — if they come up, great! If not, less to worry about.

The soil is very damp still from the storm yesterday. It’s hot, in the upper 80s and staying above 60 degrees at night. Everything should germinate pretty fast.

Now to figure what those caterpillars are and how best to kill them (besides smushing them, which I never do but did this time bc I was so irritated).