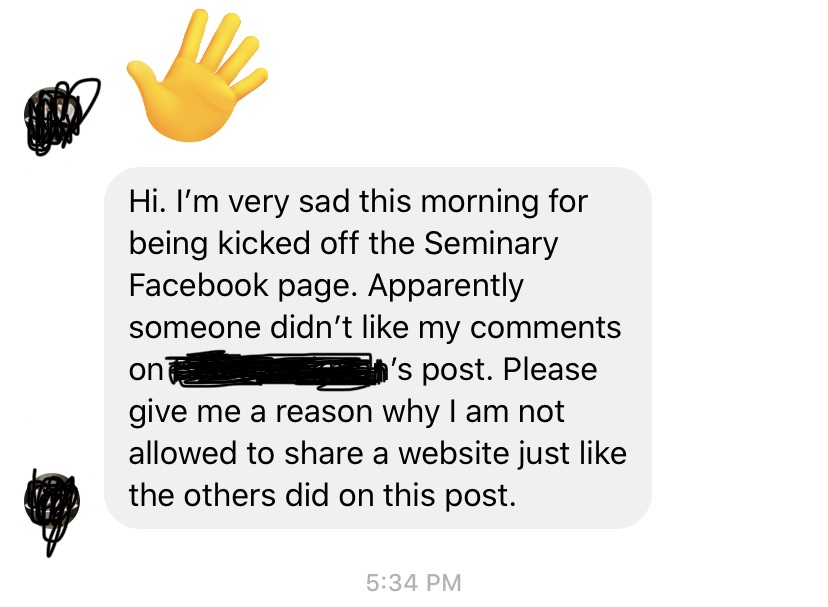 I admit it: I’m a chicken. I don’t want to be attacked by irrational He*rtlanders, so I’m obfuscating their moniker. I don’t have the energy to deal with people who are irrational.

So yesterday on the Seminary FB Group, I got a report of a post that had comments that were going a little nutty. I looked at the comments and posts. The comments (while deliberately distracting) were off topic and being made by a woman living in Utah, which meant she isn’t a Seminary teacher. In addition, she shared a link to a site that sells books on the so-called He*rtlander theory of Book of Mormon geography, which is that all of the events recorded in the BoM occurred in central North America. I don’t have a problem with anyone adopting a favorite theory on non-essential, non-doctrinal, non-salvific issues. But, I do have a problem with speech accusing the Brethren of apostasy and/or ignorance, which is what these theorists do. They claim that LDS scholars and intellectuals are, for reasons unexplained, conspiring to hide the actual location of BoM sites from Church leaders by pushing a Central American geography. Even if they were, so? But the notion that church leaders are being led astray or influenced by evil intellectual conspiracists to suppress a geographic theory is dangerous, not to mention untrue. The Church’s official position on geography is that is has none. It also clearly states any person can believe whatever they prefer about the location of Book of Mormon events.

Now, I don’t have any strong feeling about any of the BoM theories of geography. I think geographic ideas just aren’t that important, and I have no particular attachment to any of them. I’m well-known in my family for shooting down the Tulum Mexico family that pushes BoM connections on unsuspecting tourists. I’ve been accosted by them after Church when visiting the area — they’re crooks. I don’t have a problem with sharing alternate geographic ideas with students and have. But these He*rtlanders’ conspiracy theories do not need to be pushed to unwitting Seminary teachers and then on to students.

So I deleted the comments and banned the poster. Here’s what happened, and I have to say, it does not go very far to making me sympathetic to Hea*rtlander views. This woman was obviously trying to get me to say that our FB group does not “approve” websites that contain He*rtlander theories, because that would play directly in to their conspiracy theory that LDS thought leaders are coordinating efforts to suppress ideas about a North American geography for the BoM.

I do hope the poor woman can get her mind straight. But wow. Tell someone they are skirting apostasy and her response is which websites are approved? Yeah, doesn’t bode well for her. And it doesn’t speak well of He*rtlanders in general.