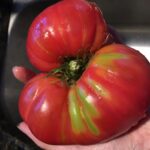 What is with the Brandywines???

For real, little critters! What is the deal? You creep into my garden, ignore the riper cherry tomatoes Romas and Early Girls, and go straight for the Brandywine. I mean I’m glad you’re leaving the Cherokee Purples alone, but for real, what is the attraction to Brandywine?

It’s partially my fault — I forgot to turn the sprinkler back on Saturday after I was in the garden, so it wasn’t working. Plus a storm knocked off the camera while we were swimming at Cara’s new pool yesterday, and we didn’t notice. I had turned off most of the garden notifications in my overconfidence that we had taken care of our garden pest problem. Today’s damage is either another groundhog or a rabbit. I have half of another cantaloupe can put that out in the trap to try and catch it.

This war is never ending.

Two things happened over the weekend that are worth mentioning: Jared started the trench for my water spigot, and he got me some old hay bales to start some carrots in.

In addition to the water line, he also ran electrical cable through the trench. He was able to get under the sidewalk, so now we are waiting on Miss Utility to come out and mark everything so he can hand dig over to the water spigot on the outside wall of the house. We have done some thinking and speculating and pinteresting, and I think we will put in a column of cement out there and cement in an outdoor outlet, two hose bibs (one for hoses and another for a possible drip irrigation system), another electrical box (for hopefully a smart irrigation system someday), and a water fountain fixture at the top. I’m fairly certain I know how to make the concrete form using one of those cardboard columns. My friend made a concrete sink several years ago and showed it to me. I think she can help me with the bowl piece for the water fountain. If we put gravel in the drain pipe for it we should be able to keep the water from washing anything away — but ideally any used water would go back into the garden, maybe through a drain to the asparagus bed. We don’t have to make any decisions on that right away.

I have been reading on Craig LeHoullier’s blog about how much he likes his straw bale garden and that he’s planning to convert his entire driveway garden to bales. It’s too late in the year for me to start any tomatoes, but in researching my fall garden I discovered that you can grow carrots in a bale garden. It makes sense that would be super easy since the bale would be loose enough for the carrots to grow deeply — much better than our native clay soil.

You probably noticed from my pictures that we live on a farm. The guy who rents the place keeps it in hay mainly but sometimes does corn or soybeans as part of his rotation. Some people say you shouldn’t use hay bales because of weeds, but others say it’s no big deal and that the hay bales require less fertilization because the plant matter breaks down and provides compost unlike straw bales. Since I have hay bales around and we could probably find some already rotted out, the cost is almost zero for me to try this out. I had a giant Benny’s pizza box from our Star Trek Discovery party on Friday, so I knew I could put that down under the bales. I though I’d have to buy fertilizer, but it turns out that Miracle Gro All Purpose is a high nitrogen (24N) fertilizer, and I had a bunch already in the shed. I also have a bit of leftover garden soil. This means that my cost to start this carrot experiment will be just the cost of some seeds. Awesome!

It turned out that the storm Sunday knocked down the camera. We were swimming at a friend’s place and didn’t notice. The camera was turned the wrong way to catch any video of whatever nibbles on my Brandywine, but it did catch this video of me moving the hay bales:

And here are some pictures of the bales with the fertilizer:

Now I’ll need to get some carrot seed picked out.

I haven’t fertilized in a while, and none of the tomato plants I cut back so hard have died yet, so I decided to go ahead and fertilize with the all purpose stuff. The high nitrogen should make the plants put on a bunch of leaves, which is what they need right now to build up strength against further blight. It’s too hot for the flowers to set, so I figure if the plants can make some leaves and ripen what’s already there, that’s a win. I am keeping up on pulling the tomatoes when they are about half ripe to keep them away from the pests, but that will also keep the plants from needing to ripen so many fruit.

At least that’s my theory.

Like everything in the garden, it’s all a learning experience.

I did decide that next year I will fertilize with the MG all purpose for the first several weeks to help the plants grow large and then switch to the tomato specific stuff later to help with fruiting.

The thinned tomatoes are still alive:

I went back and looked at the calendar, and if you count from my planting date, the beans should be “on” the day after tomorrow. I think you’re really supposed to count from sprout date, so I think that I will be doing a lot of picking toward the end of this week next next week.

After the bush beans are done, I’ll pull them up to be composted and I’ll use the space for some fall plants. I’ll let the pole beans go until they die back in fall.

There are a lot of leaves yellowing and falling off my bean plants. At first I thought it might be animal damage, but I’m pretty sure it’s just leaves dying. I am not sure if this is normal or not. I’ll do some reading, but it does have me a little worried:

It was Sunday yesterday, so I didn’t water anything. The tomatillos were wilted this morning, but I see two have split open their husks and one is even turning purple!

If these purple tomatillos turn out to taste good, I’d grow them again. The plants are prolific and TOUGH.

I have a large pink Brandywine that I let ripen in the house over the weekend, and today I cut it up for breakfast:

One of the clearanced Bernadine clematis seems to have died. I have that extra one that I think I’ll go ahead and have Jared plant in its place. The other four Will Goodwin that I bought online are doing great! One actually has a bud!!!

The squash are growing bigger but don’t seem to be putting on many flowers. I thought the zephyr squash would have been ready to pick last week since I’ve been watching it for some time now, but now it looks like it’ll be the end of next week.

I thought I was getting better picture than this of these butterflies:

The tomatoes I’m freezing are mainly cherry and Roma at this point. I have several Tomatoberry in the bag that I got at the farmers market. They are a beautiful red color and have an oxheart shape, but I don’t like them at all for fresh eating. They are being relegated to sauce.

Last picture of all the harvest:

So things are progressing in the garden. Every day is a new adventure or problem. I’ve spent far more hours out there caring for it, and my work is paying off. I hope that I’m learning some things that will help me grow an even more successful garden next year. I think that after this week the terrible heat will be past, and tomatoes will begin setting again. To be honest, a slight lull in tomatoes putting on will be welcome.

It’s amazing to consider how the rain and sunshine and plants and pollinators and fertilizers and fungicides and animal traps all work together to make such a nice harvest. It’s nature plus science plus human beings trying to balance it out that make for a nice harvest. A garden is quite the machine.