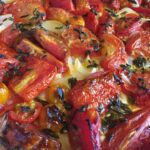 Many of the tomatoes that I pulled to keep away from the groundhog have ripened, and so I decided I better cook or preserve some. Today I roasted the ripe tomatoes to make my first roasted tomato sauce — so EASY!! I also made up the syrup for the blackberry ice cream and froze several tomatoes whole to make sauce at the end of the season.

I have more tomatoes coming along than I realized. Today they are looking so straggly! But I looked back at nctomatoman’s pictures from his garden, and his look much the same as mine. I’ve got to stop comparing my garden to those who only grow hybrids and who can do it in straight compost or whatever. I do think I could get bigger plants if I amend with manure this year and cover the garden to try and break it down for next year.

Here are some pictures of today’s cooking projects:

I made salt and pepper, curry, curry and cinnamon, and Chile powder/garlic powder/red pepper/salt roasted chickpeas. The last two are my favorite. These are 0 weight watchers points (okay, maybe 1 for the olive oil), and I really like them so I think I’ll do it again.

I also really like how the roasted tomatoes turned out. This was so much easier than making sauce as I usually do, and more sensible for a small match. As expected, the fresh oregano and lemon thyme from the garden almost burned, but they taste good. Next time I will leave the fresh herbs out until the tomatoes are done. I used bottled garlic in oil, which worked great. The onions are sweet onions because that’s what I had. Yellow onions would give the sauce more kick, but the stars are the tomatoes, which became super sweet when roasted. I’ve seen recipes call for adding sugar to tomato sauce — no, not me. These are amazing without it. I’d definitely do this again, and shared the recipe with my dad.

I did go out this morning while it was still “cool”. The heat index yesterday was up to 123 degrees, I heard. Today is slightly cooler, but Saturday will be even hotter. The heat should make the tomatoes ripen even faster, so I’ll have to keep checking on them. There are several coming along now, but none ready to pick.

I have been wanting something to haul my harvest into the house — garden hods are so expensive! I was about to buy a couple of buckets and baskets on Amazon, but had held off because it was going to be $150. Yesterday at Walmart Jared saw some clearanced stainless steel buckets for $2.50 each and a standup colander for $7. They aren’t exactly what I wanted, but for less than the cost of one basket I came home with two quart buckets, a bigger oval bucket, and a colander. It’s rare that something turns out costing less than you expect when gardening, so I took the gift:

We are going to use the leftover blackberry pulp to make blackberry lemonade. Jared is our picking up eggs to make the custard for the ice cream.