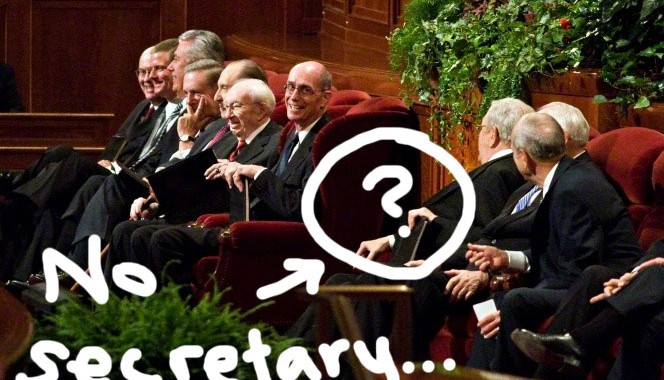 I’ve been in three Relief Society presidencies, and each group has had someone ask if they have to sit at at the front of the classroom during meetings.  In the past I’ve said it’s up to you, but today I stumbled on this article from Elder Boyd K. Packer (The Unwritten Order of Things, Brigham Young University devotional, 15 Oct. 1996).  He says something different:

The things I am going to tell you about are not so rigid that the Church will fall apart if they are not strictly observed all the time. But they do set a tone, a standard, of dignity and order and will improve our meetings and classwork; they will improve the activities. If you know them and understand them, they will greatly improve your life. …

I give as my first illustration of this unwritten order of things so simple a thing as this: The one who presides in a meeting should sit on the stand and sit close to the one conducting. It is a bit difficult to preside over a meeting from the congregation. The one who presides is responsible for the conduct of the meeting and has the right and the responsibility to receive inspiration and may be prompted to adjust or correct something that goes on in the meeting. That is true whether it be an auxiliary meeting presided over by the sisters or any of our meetings.

A new stake president sometimes will ask, “Must I sit on the stand in every meeting in the stake? May I not sit with my family?” I tell him, “While you preside, you are to sit on the stand.” I am tempted to say, but I don’t, “I can’t have that privilege; why should you?”

Another example: If you watch the First Presidency, you will see that the first counselor always sits on the right of the president; the second counselor on the left. That is a demonstration of doing things “decently and in order,” as Paul told us. Ordinarily, but not always, if the presiding officer speaks, it will be at the end of the meeting. Then clarification or correction can be given. I have had that experience many times at the close of meetings, “Well, brother or sister somebody said such and such, and I’m sure they meant such and such.”

Can my secretary sit up front during meetings?