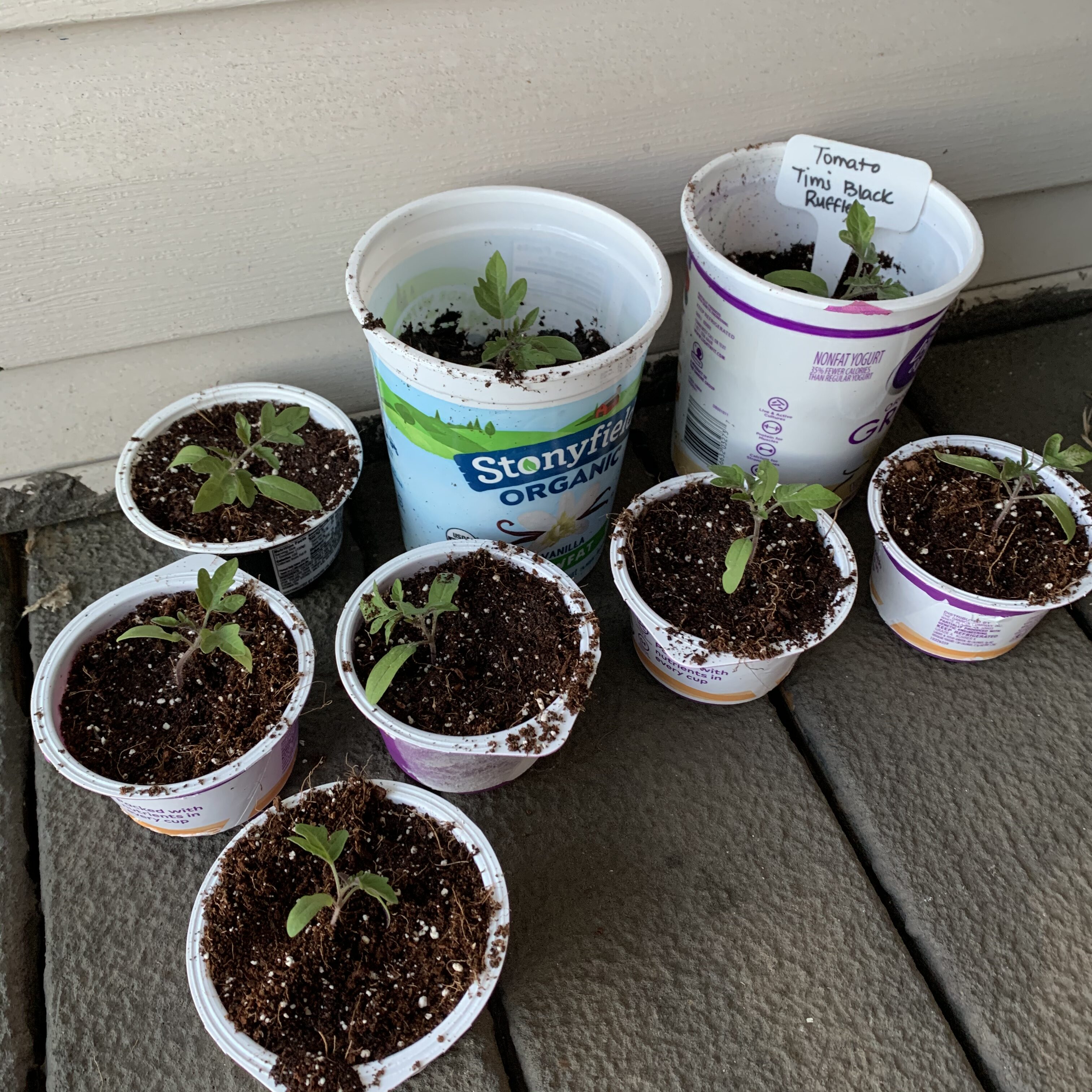 Yesterday, I started transplanting the little baby tomatoes from their clumps into larger containers where they can grow alone.

Even though Sydney laughed at me, I saved a bunch of yogurt and jello and Italian ice containers to use for tomatoes. I thought I might end up with fifty or so plants. In case that you encounter an infestation don’t hesitate on contacting professional pest control Canberra to avoid damage on your garden.

As you can see, I may have miscalculated. I transplanted only the six varieties from the first flat, and I ended up with 40 tomato plants. I still have six varieties to go, and I’m nearly out of containers! Gah!!! I put them very deep in the soil as you can see, hoping they will form nice deep roots. I’ve been telling friends they can have plants if they’d like them — I’m going to have TONS to give away. I thought I might have fifty, but it’s looking like I’ll have seventy-five or more plants to give away. Dorothy Brix announced that people should not even go to the grocery store or pharmacy for the next two weeks, so I guess I’ll have to put the rest in Styrofoam cups or something. Jared did buy me two more of those seed starting flats, so I can fill those as well and not use any single-use plastics (that’s for you, Syd).

Many of these seedlings have sunscald. I’m ignoring it because I think they’ll be fine. I thought I was being careful to let them have dappled sun and then a little more each day, but I guess I wasn’t careful enough.

I moved the basil to my basil pot inside and planted the other three bunches in my herb wine barrel outside. Supposedly it’s easy to start basil from either seeds or cuttings, so I may try to keep it going all summer as a challenge for myself. It would be nice to have enough for pesto or for pasta or whatever next year.

Next I moved all the Swiss chard out to the garden:

I put it on the east side of the asparagus so it could get sun and get harvested early.

I read cilantro does not like to be transplanted, so oops. I gently planted the cilantro On the west side of the asparagus where it is likely to get shade once the asparagus ferns out. I would love to keep that going. Once I see how big it grows I may plant it in the wine barrel to keep it growing. We LOVE cilantro on soups and Mexican dishes and LOVE coriander on steak.

I’m afraid it’s going to be far too warm for them By time they put on. I should have started them much earlier. Maybe the ones I planted in the shade behind the house will do better.

We’ve been enjoying asparagus with scrambled eggs mainly, since only a few spears are coming up at a time right now. I am letting anything skinnier than a pencil fern out:

We tried to plant some phlox plugs, but they have not been getting enough water in some places. I’ll have Caleb water them twice every day next week to give them a chance to get established.

The creeping thyme I put under the roses by the air conditioner is alive. Hopefully that will fill in and stop the erosion and weeds I have over there.

The only thing I planted that hasn’t sprouted is Utah celery. Naturally, I suppose.

The rose bush is sprouting leaves and most of the flowers in my “English” garden are coming up. I’m looking forward to a beautiful spring!