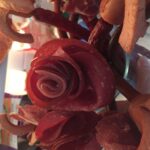 Sydney and I made one of those “broquet” meat and beef jerky bouquets for Jared today. It was fun, and easier than I thought. I spent $18 on beef sticks and about $21 on cured or dried meat and Nathan’s hot dogs, not all of which was used. If I were doing it again I’d use one jar of dried beef and get some better salami from the deli counter, dropping the hot dogs. I think you could do a dozen meat flowers for around $30.

We learned a few things, and I’ll share them below.

I thought prosciutto would be a good choice for the bouquet, and I already know Jared likes it. Nope. It was too sticky and thin to make nice, big flowers. I was able to make a couple of rosebud-looking things with the leftover meat. Here’s what they looked like:

I bought a selection of beef sticks, not really knowing what Jared would like. The Slim Jim’s were longer, but they were too weak to hold up the flowers. I was able to cut down the Slim Jim’s and use them anyway, but the Duke’s Tall Boy meat sticks worked much better (and tasted better).

Tip 3: Dried Beef is the best meat for flowers

I used salami and some other Italian cured meat, plug regular old Armor Dried Beef — you know, the stuff in the glass jar that your mom made chipped beef with. The dried beef worked the best. Four pieces made nice, big flowers. I folded each piece of meat in half to make a moon shape, wrapped it around the beef stick, and then pinned it with toothpicks

Tip 5: Hot dogs are surprisingly not terrible for meat bouquets

Hot dogs made for some pretty, lily-like flowers. If you’ve ever made hot dog octopuses, you get the idea.

Basically you cut a hot dog in half, then split it lengthwise until about 3/4 inch from the round end of the dog. Split each half evenly, lengthwise another 2-3 times. Cool the hot dogs in boiling water, and the split pieces will curl up to make flower petals. You can put mustard on them to make centers, but we just wadded up some of the unusable prosciutto or used nubs cut off the Slim Jims to make flower centers.

I suppose I could have straightened out the petals on the hot dog flowers, but that’s not really how they turn out. They cook up kind of floppy. If you want a more formal bouquet, just go with the dried beef.

You could even do this:

In all we are happy with the result. Don’t make these too far ahead of time as the hot dogs dry up, and your dad can enjoy a great meat bouquet, too!