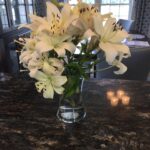 I saw my first Japanese Beetles today. The first two died in the throes of ecstasy, and the third, a voyeuristic onlooker, died ignominiously. Death was too good for them, and I showed them far more mercy than their kind deserves.

And thus it begins.

The original planting spot of the butternut squash seedlings has been looking kind of peaked, and when I sprayed the area with Sevin, a squash bug scurried out. He died quickly. I think I’ll probably have to replant that spot, too. The butternut squash are having trouble making a go of it this year.

We arrived home after our Star Trek party on Friday night, greeted by That Dern Deer leering lustily at my garden. I told Jared to go get a gun. Hearkening to my insistent demand for A Final Solution with his usual zeal, he ran timidly toward the deer (but not TOO CLOSE) waving his arms about maniacally. Confused more than anything, the doe ambled off, heart rate undisturbed.

On Saturday, near certain that I’d eventually persuade him to off that Dern Deer and fearing jail time for illegally killing a deer, Jared finally put up the Nest camera I bought him at Christmas. With his usual protestations about how difficult it would be to run power to the camera — which I ignored, knowing that there is power running all over that area — he climbed up on the roof to install the camera where it could spy on the garden and notify us if a deer approached.

I was down at ASL’s making a meat bouquet when he called unexpectedly. Apparently a gust of wind had come up, and blew the ladder down. Could I come save him? I walked up the hill, laughing the whole way at this scene:

The ladder had somehow catapulted over the air conditioner and was down pinned kind of by the back door and rose bushes. I managed not to laugh right in his face, but the whole situation was pretty funny. My last words to him when I walked down the hill were, “You won’t fall off the roof if I leave, will you?” I’m grateful that didn’t happen, and he’s grateful he had his phone with him. I may not have been back for another hour, rendering him human jerky. At any rate, the camera is up now, and my phone will alert me every time a cat crosses the camera. So far it has not registered any movement in the garden, even when I worked out there for an hour earlier today. Sigh.

In addition to the camera, I put out some Deer Off repellent stations around the garden and blackberries, while Jared spread some Repels-All granular animal repellent in a way that makes absolutely no sense to me and has no relationship to efficiency — not a straight line anywhere. I put some Irish Spring soap around the garden last week, but it didn’t have any effect. He’s also been going outside to spray some of his, ahem, special sauce about the area to try and repel That Dern Deer. We haven’t seen it since Friday night, but that doesn’t mean the little bugger won’t be back.

I don’t think I posted any pictures of the kohlrabi after the insects first attacked and then That Dern Deer decimated them. They look terrible. I started pulling them up today, and I’ll pull the rest out tomorrow, probably replacing them with some more squash. One of the plants had a fruit that was about an inch across — it may be enough to get a bite out of. That will be the end of this season’s ill-fated kohlrabi crop. :-(

I had noticed a couple of days ago that the Better Boy tomato on the edge of the garden wasn’t looking too good. I had picked off most of the bad foliage, but it was looking pretty terrible and hadn’t grown much during the past week. Last week was the first time I hadn’t sprayed with the fungicide. It proved to be a mistake. Today I got down to look closely at the plant. Early blight. I ended up pulling the whole plant out and tossing it. I am sick about it, but hopefully I can save the other plants, which don’t seem to be showing signs of it yet. The nearest Better Boy does have some bad leaves, but I pulled them off. I had some old mancozeb and a new bottle of Infuse in the shed, so after I sprayed the remainder of the Daconil on the tomatoes, I mixed up a batch of the other fungicides and sprayed the heck out of those tomatoes. I’ll have to keep spraying them at least weekly from now on.

I also have a little big of insect damage on at least one of every variety of plant in the garden, even the tomatillos. I sprayed Sevin all over the garden to control on those pests. I’ve been only spraying for insects weekly, but I’ll need to spray more often from now on. I’ll be pulling up the kohlrabi, which will also help with some of the pest control, and I’ll probably plant some more squash in that area so that the crops don’t get taken over. I recently read that putting aboard out overnight helps trap the squash bugs. I’ll be trying that, too, as I don’t have space to plant a trap plant.

My flowers are looking nice, though, and the new ones I added have not died yet! The clearanced daisy gardenia shrub looks pretty healthy, and I’m thrilled! The new lavender Rose of Sharon looks amazing and has already blossomed out. The red barberry looks gorgeous next to the peach colored double daylilies I have in the English garden. That area is really coming together. I cut the worst of the damaged canes out of the English rose bush, leaving only two canes. New canes should come up soon, which I’ll be able to train to the new arbor trellis.

Mother Nature has won a few skirmishes this week, but I am fighting back. Take a minute to admire my asiatic lilies before you go: