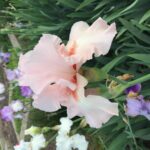 I was away for a week, and when I got home the garden was full of blossoms (and weeds — poison ivy, as it turns out). Nobody weeded for 9 days!!! :( The asparagus was still growing well, but my husband was confused and let a whole bunch grow up like we did the first two years, so I had to clear out a bunch of almost-ferns on Monday. He has been giving away a lot of asparagus to folks at church, and I sent some down to my aunt Sunday. I made a big mess of Epicurious’ Cream of Asparagus soup Monday, and I’ll freeze what we can’t finish today.

While I was gone the blue and pink irises came out! I just love the way these pastel colors complement each other! The blues I have are mainly from my friend, Terrell, who has only blue in his front yard. He gave me probably 100 rhizomes when he needed to divide them a couple of years ago. All of the others are from another friend, Dawna, who had them in her yard from the previous homeowner. That person had moved them from a relative’s yard, but they never even bloomed. There just wasn’t enough sun. She didn’t even know what they looked like, so I planted them not knowing what I’d get. Turned out they are gorgeous! That was 8-10 years ago. Now I have hundreds of beautiful Irises all over the yard! I love them!

The roses bushes are going crazy! I’m so happy to see them doing well! I’ve decided to take out that mock orange that I hate and train the English climbing rose I have over a trellis instead. That’ll give me some of the height I’m looking for in that spot and leave it a little easier to access the utility stuff on the wall right there. That rose is a fast grower and I’m having trouble keeping it under control. I cut it way back this year, and be already it’s almost as big as it was last year at the end of the season.

I pulled a good many weeds around the kohlrabi, although it doesn’t look like it. The kohlrabi seems to be growing surprisingly slowly to me, at least when compared with the microgreens next to them (which includes a red kohlrabi). I have read that kohlrabi may not be ready until fall if direct planted. I hope that doesn’t happen! That gardner is in New York state, and I’m hoping our longer growing season will make it possible for me to harvest next month. If it doesn’t work it’s not a crisis. I’d just like the space for tomatoes or squash.

The peas are doing fine, but the germination rate was super low in certain spots. I’m actually wondering if I may have some voles there.

I bought a couple of sick azalea bushes years ago and put them up by the gate. Only the white one has survived, and it has stayed small. The bush by the house is an Encore Azalea called Autumn Twist. It’s supposed to have the occasional fuschia flower. Ha. Every year the bush becomes more and more proportionally fuschia. I think whatever they did to it to make it that pretty white isn’t stable. I do love that it reblooms, however, and the blossoms last longer than any other azalea I know. I’d buy another Encore Azalea, but probably not Autumn Twist.

Oops! Today I realized I had not posted a picture of my tomatoes yet! We put these in a couple of weeks ago and have been keeping them covered when it gets below 40 degrees at night. The stalks are super thick, which I assume is because they are growing slowly. I think the lower leaves are yellow because we’ve hd so much rain lately. Nothing I can do about that, but I hate to see it.

I’m also concerned about the blooms — I pinched some off before I left on my trip two weeks ago, but they’re back. I’m not sure whether to trust Mother Nature to know what she’s about, or if I need to encourage these to grow a little more before they start making babies. Putting tomatoes out this early is an experiment — it’s fun to see what’s happening with them. I’ve planted Pink Brandywine, Cherokee Purple, Roma, and some kind of grape hybrid. I may also have another hybrid out there — can’t remember.

Anyway, all I’m doing for my summer garden is beans, tomatoes, and squash. I’ll put the squash in as soon as the seeds come in. I’m doing delicata, butternut, and zephyr. I’ll add more tomatoes in around Labor Day. Those will probably all be hybrids. I’m hoping to do a bunch of sauce this year, but I’m tentative. I don’t want another burned sauce incident! (Don’t ask — I still haven’t recovered)

My daughter planted some zinnias. I am hoping they do well for her, so she can cut them to share with her friends. We planted a giant variety I’ve grown before and that did very well. I think it was Benary’s Giant. They grow 4-5 inches across and make a really nice cut flower. Germination has not been as good as I’d expect. I may replant some extras or add some sunflowers so she can cut them later.

I also found a guy who will send me some Garden of Eden beans. I’m hoping he will ship them out today or tomorrow so that I can start them early next week. It may be a little late, but I think they will make it.

In sadder news, both my daughter and I planted some onions from a seed tape. Not one has sprouted. I bought those, the zinnias, and the peas from the local tractor supply. I’m wondering if something is wrong with them since all have done poorly.