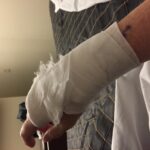 I had surgery on Wednesday, April 10, to remove a ganglion cyst that’s been bothering me for ages. It used to be that I could put a splint on it and it would go down, but the last few years it wouldn’t go down even if splinted for several days. Occasionally it would get to hurting, but to be honest, the main reason I had it done is because it was affecting my push-up! Ha!

So, obnoxious as it is, I’m going to post pictures of what it looked like as it has healed. I don’t like it when people post picture s like this on Facebook, but no one reads my blog anyway, and the images will be here in case someone googles for it.

The ganglion cyst removal surgery was uneventful as far as I know, but as usual, it took me 3-4 times as long as a normal person to come out of the anesthesia. I had warned the anesthesiologist ahead of time, but they never really believe me. For several hours I couldn’t even lift my head — I was like a rag doll. The weirdest part was the crying. It’s not like I was hurting or sad or anything. The drugs just made me cry. Turns out it’s pretty common. I was a little nauseous and they gave me something for that, plus something to wake me up, but all it did was make it so I could open my eyes. They needed the bed and asked us if we could just go home to sleep it off, so we left around lunch time. I guess we were there about 5 hours for what should have been 2-3. By dinner time I was fully alert.

I had virtually no pain from the incision. I did take the pain pills as prescribed, but they were just making me high and the anti-nausea stuff was making me sleepy, so I quit them by Friday. 600mg Ibuprofen and some Tylenol alternated in if it got bad did the trick.

By the weekend, I was ready to rip my bandage off. It was hurting like crazy, but the doctor said keep it on 10 days, so…..

We left on a trip to Chicago, and my arm was driving me up the wall. It was about this time that I realized all of the pain I was feeling was on my forearm, nowhere near the incision. By six days post-op, I decided to call the doctor’s office. I couldn’t get ahold of anyone, and I was in Chicago anyway, so I just sent Jared and Sydney to the pharmacy to buy a pair of surgical scissors to get the bandage off.

I have three wrist splints. I have found that having a couple of splints to rotate between helps me be less irritated.

This is my old splint. I’ve had it several years, but I love it. My doctor sold it to me for like $50 the first time I went in for help with the cyst years ago— pretty sure I got screwed. This splint is fairly comfortable. It’s VERY rigid, and I can’t move my wrist at all if it’s tightened properly. It has a light liner that helps it not be so irritating inside. It’s kind of uncomfortable if you don’t tighten it up. When it’s tight, it really does take all the pressure off your wrist. I think I have the size X-small (I have super small hands and wrists), This brace used to bring my cyst down in a day or so…. until it didn’t.

The only downside of this brace is that the Velcro bits get caught on stuff, so I just cut up a colorful mate-less sock and use that as a cover (see below):

I bought this Mueller green brace some years ago to swap out with my regular brace. It’s easy to put on and very comfortable. I like that it’s shorter than my other braces, which lets my forearm take a break. The only problem with this brace is I can cheat while wearing it. It’s possible to move farther than I should, even when the brace is fully tightened. It’s soft. I’d call this a medium rigid brace. It is easy to type with, but because it’s not as rigid as my other one, my wrist can get tired of supporting itself when I wear it, which means I don’t heal as well. I have the size small/medium, and it’s just slightly too large. If Mueller had an extra small this would be my favorite of the braces.

The new wrist brace came from my surgeon’s office. The brand is Med Spec (Medical Specialties) of of Waynesboro, North Carolina. It has an adjustable thumb opening (its only redeeming feature) and uses a lace and Velcro contraption to close in one motion.

I HATE this thing. Hate hate hate it.

The worst thing is how bumpy it is on the inside. It has a fabric thing inside to keep you from being pinched by the laces, but that doesn’t matter to me. When I close it the brace overlaps anyway, which means my skin isn’t pinched there. I cut the little stitching out of the fabric thing to make it like a sock liner. It didn’t help. The stitching and whatever bracing is inside hurts and leaves marks anyway. It’s super uncomfortable, even painful.

Even though this thing is more comfortable around my fingers and the thumb adjustment is nice, I just can’t get this this tight enough around my wrist. One size fits all—ha! My arm slops around inside, which hurts because of the seams, and it lets my wrist bend farther than it should, which means I can’t ever actually rest it. I think this is probably a firm support brace if you can get it to fit you and can tolerate the agony from the seams.

I had to pay a $15 copay for this, which was far too much for this Chinese torture device. I’ve seen it on Amazon for $17. Avoid this brace if you have smaller wrists.

Thought I’d give an update on my wrist. The wrist hurt very little after surgery, but eventually I had to have occupational therapy to correct the fact that the wrist wasn’t bending flat all the way. I went twice a week for six weeks. Even though the exercises seemed silly, the results were amazing! I was able to bend my wrist almost flat after two sessions and did a strict push-up. Eventually I got up to 21 strict push-ups with rest. Starting in about January, I started doing decline pushups. I have to relearn the form because I’ve been favoring that right arm so much and doing ugly things, but I’m pleased to be doing push-ups again. My right wrist does not bend quite flat, but it’s very close, and I’m relieved.

I have noticed that my right arm is weaker with certain exercises like the renegade row or one arm kettlebell swing. Occasionally I’ll wobble on an overhead press, too, but I think I can build up strength in that right arm, especially since it’s my dominant hand.

I took the following pictures on April 18, 2020. The incision left a dent in my wrist that you can see sometimes, but it’s not bad.

I had serious nerve issues in the skin of my forearm for many months after the surgery. The doctor prescribed vitamins, which had no effect (of course), and pain meds didn’t help. For a long time I couldn’t wear certain shirts if they bumped or rubbed that part of my arm. The pain only triggered if the arm was touched. The first touch would be like being electrocuted, and subsequent touches less shocking but still painful. I finally bought a TENS device on Amazon, and that worked amazingly well. I could use that for 20 minutes and get relief for up to two whole days. I used it regularly for a couple of months and then as needed until the irritation/pain became barely noticeable by the tenth month after surgery.

A year later I’m able to do everything I want with the wrist, although I do have the occasional twinge at the surgery site when lifting weights. My skin feels normal again — thank god (the skin thing was way worse than the surgery) — and I’d say I’m well recovered.