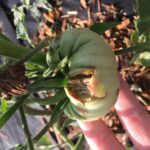 Just when you think everything is going great…. Saturday about 8pm we had a terrible storm kick up. It put up tornadoes to the north and south of us. At our house we got heavy wind and very strong, quarter-sized hail. Jared and I stood on the front porch lamenting the garden as hail was blowing sideways at one point. Hail was coming down so hard it hurt when it hit you, and literally exploded when it hit the sidewalk. It was crazy.

Since yesterday was Sunday I just glanced at the garden — moderate damage. Nothing to be done at the time. Today before the Memorial Day pancake breakfast at Do Little Farm, I took some pictures:

My friend Del has some tomatoes he started from seed and says I can have some. I’ll replace what isn’t looking good with his seedlings. He does mostly heirlooms. So all is not lost — it’s just sad to see the plants damaged.

Jared put in the 6 clematis for me on the small trellis with the purple rose. I have 4 Will Goodwin and two Bernadine planted on each side of the trellis. If it turns out the Bernadine clashes with the Will Goodwin I’ll cut them out, but at $5 a plant in the clearance section at Lowe’s, I just couldn’t not buy them. I am hoping they will fill in at the base of the trellis since Will Goodwin is a tall grower, and Bernadine is a shorty. Both are Pruning Group 2, so they should play nicely together.

Jared planted the third Bernadine up by the mailbox. It should grow over that and look pretty fantastic before too long. We have one extra left. I may plant it on the Wildlife Habitat sign post. I definitely don’t want it on the lamp post in front of the house.

The purple clematis is looking good:

Jared cut out that awful Mock Orange and even dig out the root ball. He is a champ:

Now I’ve got to find a trellis or arch for that space. I went all over Fredericksburg Saturday afternoon hunting but didn’t find anything I liked. I will have to start looking online.

That rose bush has black spot as usual:

It gets infested every year and defoliates, comes back slightly just in time for the Japanese beetles to decimate it, and comes back bigger and better the next year. I used to freak out but now I just leave it alone. The Rose seems to do fine despite it’s susceptibility. I am hopeful that training it on an arch might let it get more air and do better with the black spot. Time will tell.

I’ve never really cut roses to put in a vase before, so I decided to try it. This is 6 stems. Not bad, if I do say so myself:

The beans aren’t looking too good. Not only did they get considerable wind damage, but to my dismay, only four of the dozen or so Garden of Eden beans I planted came up. I will try again with the remainder of the bean seeds, but I think maybe they are just too old to get good germination.

The pas have pods now! I ate one this morning. Yum!

The asparagus broke off in several places, too, much to my surprise. I assume that was the wind damage. I cut 8-10 stalks today for my friend, Kim, but that’ll be the last I cut this year. These poor plants need some time to recover.