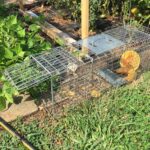 Curses! A groundhog has eaten 5 tomatoes in just 36 hours: 2 Romas and 3 Brandywines. It’s time for drastic measures. Jared went out last night and set up a camera on the shade cover frame, and caught it on video this morning chowing down on my heirlooms.

I looked over the evening’s footage and saw nothing more sinister than a grasshopper disturbing a leaf, so I went out this morning confident the pest had stayed away overnight. To my dismay, I discovered it had munched on two more tomatoes! They were still fresh, which meant it had happened only a few minutes before I went out, and in BROAD DAYLIGHT with the camera looking right at it. I stamped my feet and pouted. The blasted critter doesn’t even have the decency to eat the entire tomato! It’s insulting me by eating my best hirlooms and eating only half of each fruit! Gah!

I picked all of the sort of ripening tomatoes and put them inside to ripen while safely out of reach of the “filthy varmit” — that’s Jared’s name for it. The whole family is shocked, SHOCKED I TELL YOU, at his use of such strong language.

The camera didn’t trigger last night even when the sprinkler went off—when the little beastie was leaving. Not exactly the result I was looking for, you $100 motion sensor thingie and $150 camera security package for totally-normal-people, you. Jared and I both went over the footage. I finally found the pictures when I went back over the footage (while at the gym. Tomatoes before fitness.)

Later on I got scared I might not even get to try a ripe Brandywine and pulled even more:

I had loaned out our Harbor Freight animal trap to a friend and had to drive across the county to go get it, but I wanted to get it set up before afternoon, which is when the groundhog struck for the second time yesterday.

I definitely do not have a tomato addiction (no matter what Sheana told me yesterday when I told her I’d spent 6 hours of the day reading about tomatoes).

I read online that Havahart found cantaloupe was the best bait for groundhogs. I can smell cat spray on the trap, but I hope that the smell of the cantaloupe I smeared around will make up for it. The groundhog can’t be too scared of cats anyway, since we have two wandering around all over the backyard. I’ve set the trap and will keep my fingers crossed:

It worked in less than 30 minutes!!! Just 24 minutes after I put up the trap, the groundhog went right in! The camera tripped while I was writing this post, even. In Virginia it’s illegal to trap and release a groundhog because they are an open season nuisance species, so you can fill in the rest. At least it had a nice last meal.

My tomatoes are safe, for a few hours at least.