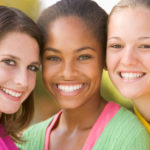 My best friend and roommate from BYU was called last Sunday to be the Young Women’s president in her ward. Her ward and stake split at the same time, and her ward lost a lot of leadership and not many youth. The ward had about 80 active youth. Many of the boys went to a new unit, while about 30 girls stayed with my friend’s ward, where she has been serving as a Beehive adviser. For the time being they are combining both youth programs, for somewhere upwards of 90 active youth.

It’s as frenetic as you’d imagine.

On Wednesday, before the call had been made public, mutual was held as usual with the young women meeting in classes. If you’ve served in the young women, and especially as a young women president, you’ll relate to things as they unfolded. It caused me some serious flashbacks:

When she arrived at the building, no young men’s leaders were in sight, and though the building was filled with adults, no one was helping to get the youth going. While the one other young women’s leader present helped get organized, my friend single-handedly herded , er, kids into the chapel for a short opening exercises.

When opening exercises were finished, my friend received a text from the parent who had agreed to lead the Laurel class saying she was going to be late. My friend got her Beehives together and sent the Laurels off to wait or get started on their own until their leader arrived.

In the meantime, the young men approached my friend to find out what they should do. My friend didn’t know, and told them to go find their leaders.

This was a cub scout and activity day girls night, and with the wards combining, the building was stuffed full of kids and parents. With the recent changes, everyone wanted to stand around and visit. ADG and CS were doing their thing, but no one was supervising the numerous children below age 8 who were literally running through rooms, opening and closing doors. It was so noisy that even with classroom doors closed, you had to lean toward people to be able to hear them speaking.

In the meantime, unsupervised young men were racing up and down the halls, because … young men.

At 8pm activities ended, but the person in charge of coordinating the cleaning for the building has passed her responsibility on to the auxiliaries (because delegation is good leadership, right) and each auxiliary has a cleaning assignment that they perform on Wednesday evenings. The Relief Society has nothing going on at 7, so they clean the bathrooms while everyone else is meeting. It’s reasonable thinking, but then no one can use the restroom during activities, and at 8, the women all stand around visiting and blocking the halls while the others try to vacuum and take out the trash. Because the ward is large, not every group has an assignment each week, so those who do not are also in the halls visiting… and you can imagine what the kids are doing.

About this time, my friend, who was cleaning, saw two young men’s leaders visiting in a corner. They hadn’t bothered to help at all or plan any activities for the young men.

Observing the chaos, several people remarked to my friend that they felt sorry for whomever was going to be called as the young women president.

My friend got in her car at the end of the evening and just cried.

You’d think that in this church of lay leaders, where most of us have been either members of a youth group or leaders of one, we’d be better at looking around and stepping up when help was clearly needed. We are super good at remarking on it, but not good at offering any help.

I realize that we don’t want to step on toes, but when there are no toes to step on, why do we comment but fail to help? Having just come off of a two-year stint as young women president, I am sensitive to the extreme exhaustion and pressure of being the young women president, responsible for so much when so many other adults seem to be comfortable blowing off responsibilities. I get that stuff comes up. I get that life is busy. But do we really understand that church responsibilities are not just fluff? That if you don’t fulfill your responsibility, someone else must? Did you find a sub or did you just text in to the leader that you’d be late? (The second is not being responsible, for the record.)

The actual work of being a young women president wasn’t really all that bad. I happen to be very good at the administrative sides of working the program, and we had our ducks in a row. Nevertheless, every time I walked into the building, my hair caught fire. I finally realized it was decision fatigue. None of the decisions were particularly difficult, it was just that there were so many of them at a time when I had extreme personal and family pressures. It’s just relentless.

I’ve been a relief society president, and I’ve taught Seminary, but nothing compares to the bone dead, bleeding exhaustion of being a young women’s president in an area with active youth where the building is far away and the stake isn’t organized enough to do their own jobs, while managing a job and home life and adult children and younger children and elderly family members and interpersonal issues that come with life. I try to be good about reading my scriptures and attending the temple and even attending Sunday School when I can during second hour (seriously, this alone should be enough to get me into the celestial kingdom) to try to get some spiritual uplift. But young women president the calling is so emotionally exhausting, there is just not a way to ever catch up. It’s a steady drain from the time you walk in. You can try to refill, but the tank never gets full again until you’re released, or leave. Literally the only way I could escape was to go on a cruise and leave my phone at home. If I had access to the internet, folks would still email or text me.

I’m glad to be useful. I’m glad that people trust me to help them. I’m proud to be considered reliable and the person you can go to when you need help. My situation in life allows me the resources, financially and time-wise, to serve and serve hard. And I do.

It’s been 7 months since my release, and I’m just now starting to have days where I feel like myself again. The prolonged stress caused changes with my female bits, resulted in a several months-long depression, and the sausage-making and shirking of responsibilities by priesthood leaders I observed very nearly caused me to lose my faith. I lost tens of thousands of dollars in revenue as I scaled back my own business to spend the time necessary to run our young women’s program. I ignored a clear prompting and put in the name of the wife of a friend for a position at his request, and ended up losing both their friendships and damaging our family relationships irreparably. That ten-year friendship is lost. I served while blood vessels burst in my eyes from the strain. I have questioned whether God even exists at all. I have lost my place in the world. The cost, personal and physical and spiritual, has been high.

One of the most frustrating things was that no one seemed to even notice how badly I was suffering. It felt like no one cared enough to even check on me. I realize that I have a way of exuding confidence and calm when things are going to pot. Balls don’t get dropped, and I make it look easy and that everything is under control (your kids are safe with us!). But looking good and making good decisions doesn’t mean that I did not feel the pressure. And boy, did I.

I would have told you if you had asked.

I’m working to rebuild my testimony after some very special experiences in the scriptures and temple. I take my covenant to give up my life in God’s service seriously. I am trying to want to serve Him again. Oh my gosh it’s been hard.

The week after I was released I ran into the stake young men’s president at Target. His wife had served as young women president before me. He told me the bleeding would stop and all that would be left was the positive memories. I can’t say that has happened for me yet. But the flashback experience this week was the first time in seven months that I could look at the universal struggle of being a young women’s leader and get a little joy out of it. Sometimes church service is hellish. I’m hoping someday I can see that I grew positively from this. But it still seems like it was nothing but a lesson in endurance.

I’m still here, clinging to the vestiges of my faith, though.

Hoping it’s worth it.