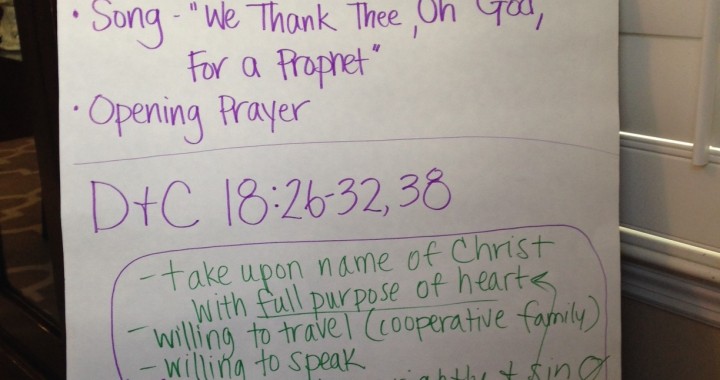 This lesson was another winner. I am relieved that things seem to be going along steadily. Today we talked about the Three Witnesses, the Atonement with an emphasis on repentance and punishment, and covered the job description of the Twelve Apostles. We had a nonmember who had just moved into the building show up and stay. She’s Catholic, so she didn’t agree within some of the things we said, but she loved most of it. She says she’s coming back next week. Hopefully she will. I emphasized the importance of church attendance and taking the sacrament, hoping that even if our visitor doesn’t take it with us she takes it somewhere.

The ladies always make me feel so good about the class. I’m never sure if I’m getting points across, but they are telling me it’s clear and saying the class is wonderful. Those are evidences that the Spirit is there, so I suppose that means success. I work hard to get everyone to comment. We had nine again (Jean, Betty, Cathy, Marie, Lillian, Connie, Margot, and Trudy) plus the visitor, Layla. That’s the ideal class size, IMO, but we’d not turn others away, of course. It’s a fun group. I hope they really are getting something out of it.

I opened the lesson with a question to the class to describe the experiences of the Three Witnesses as explained in the workbook to explain the background from D&C 17.  Not one had done the assignment, LOL.  I bet they do next week, but even if they don’t it’s fine.  Adults do what they want.  Fortunately, I had read the text from the student study guide and the manual, so I was prepared to read it out and fill in the details.  We had a pretty good discussion — I had a student say that she believed that the Witnesses statements were more powerful because they were excommunicated, and she believed that it was actually their calling to be ex’d.  It’s an interesting perspective.  David Whitmer said the Lord told him to leave the Church, and if we say he’s an honest guy, we have to believe that statement, too.  DW is my favorite of the three incidentally.  I love his orneriness.  Maybe he wasn’t ornery in real life, but the history makes him seem so.  He makes me chuckle.

This, btw, was a freaky thing to teach with a non-LDS visitor in the room.

Next we read D&C 18:26-32, 37-38 and I asked the class to look for the job qualifications of a member of the Twelve.  My original plan was to make a sort of want ad, but it didn’t really flow, so we just listed what they suggested or found in the reading.  These gals want to say ideas from their knowledge instead of looking in the text.  I keep pushing until their ideas and recollection run out so that they have to turn to the scriptures.  I’ll get them trained.  This was a good discussion

One of the students said something during this that was a perfect transition to my last activity, so I called an audible and skipped to the end and to do Different Lenses with D&C 18:10–12 at this point.  I cut out some eyeglasses shapes using my Silhouette (which I love) and wrote on them a couple of different circumstances on them. I used parent, bishop, someone whose loved one has just passed, someone who did something terrible, Oliver Cowdery, yourself, a missionary, a teenager, a visiting teacher, etc.  The idea is that you read the passage through a different lens, ie, from the standpoint of someone else.  Here’s the passage

Remember the worth of souls is great in the sight of God;

For, behold, the Lord your Redeemer suffered death in the flesh; wherefore he suffered the pain of all men, that all men might repent and come unto him.

And he hath risen again from the dead, that he might bring all men unto him, on conditions of repentance. (D&C 18:10–12)

It was a great study on the Atonement and its potential effect in our lives and the lives of others.  This was a great discussion.

I wrapped up with the comforting information on Endless punishment from D&C 19:4–7.  Students had a few questions and misunderstandings that I had to correct, and I used the following quotes to clear it up.  Not all of my students are particularly good scripture readers, yet, so they miss some of the explanations found in the scriptures.  I drop the “plain English” quotes from the into my electronic scriptures so that I can help when questions come up.

Elder James E. Talmage of the Quorum of the Twelve Apostles explained: “To hell there is an exit as well as an entrance. Hell is no place to which a vindictive judge sends prisoners to suffer and to be punished principally for his glory; but it is a place prepared for the teaching, the disciplining of those who failed to learn here upon the earth what they should have learned. True, we read of everlasting punishment, unending suffering, eternal damnation. That is a direful expression; but in his mercy the Lord has made plain what those words mean. ‘Eternal punishment,’ he says, is God’s punishment, for he is eternal; and that condition or state or possibility will ever exist for the sinner who deserves and really needs such condemnation; but this does not mean that the individual sufferer or sinner is to be eternally and everlastingly made to endure and suffer. No man will be kept in hell longer than is necessary to bring him to a fitness for something better. When he reaches that stage the prison doors will open and there will be rejoicing among the hosts who welcome him into a better state. The Lord has not abated in the least what he has said in earlier dispensations concerning the operation of his law and his gospel, but he has made clear unto us his goodness and mercy through it all, for it is his glory and his work to bring about the immortality and eternal life of man” (in Conference Report, Apr. 1930, 97.)

President Joseph Fielding Smith gave this insight: “The same punishment always follows the same offense, according to the laws of God who is eternal and endless, hence it is called endless punishment, and eternal punishment, because it is the punishment which God has fixed according to unchangeable law. A man may partake of endless torment, and when he has paid the penalty for his transgression, he is released, but the punishment remains and awaits the next culprit, and so on forever” (Doctrines of Salvation, comp. Bruce R. McConkie, 3 vols. 1954-56, 2:228).

I wrapped up with D&C 19:23: “Learn of me, and listen to my words; walk in the meekness of my Spirit, and you shall have peace in me,” teaching students they were moving toward peace by attending church and classes like this one and being obedient — taking action on what we learn.  In these ways we will feel confident (another lesson theme) in the presence of the Lord and feel His peace.  Great lesson.

The ladies are so appreciative about the course.  They are constantly telling me what a great teacher I am and how I make it come alive. I do love the material, but I’ve been a little worried I may be a little too energetic for a class that includes octogenarians!  One told me this week that I make things so clear to her.  Even the visitor was complimentary.  I know exactly how much I bumble and mess my words up, and knowing how the Spirit works, it’s clear he’s the one helping them understand the messages the Lord has for them.  This is evidence that the Spirit seems to be there, and if he’s there, they’ll get the lesson they need in spite of my bumbling.