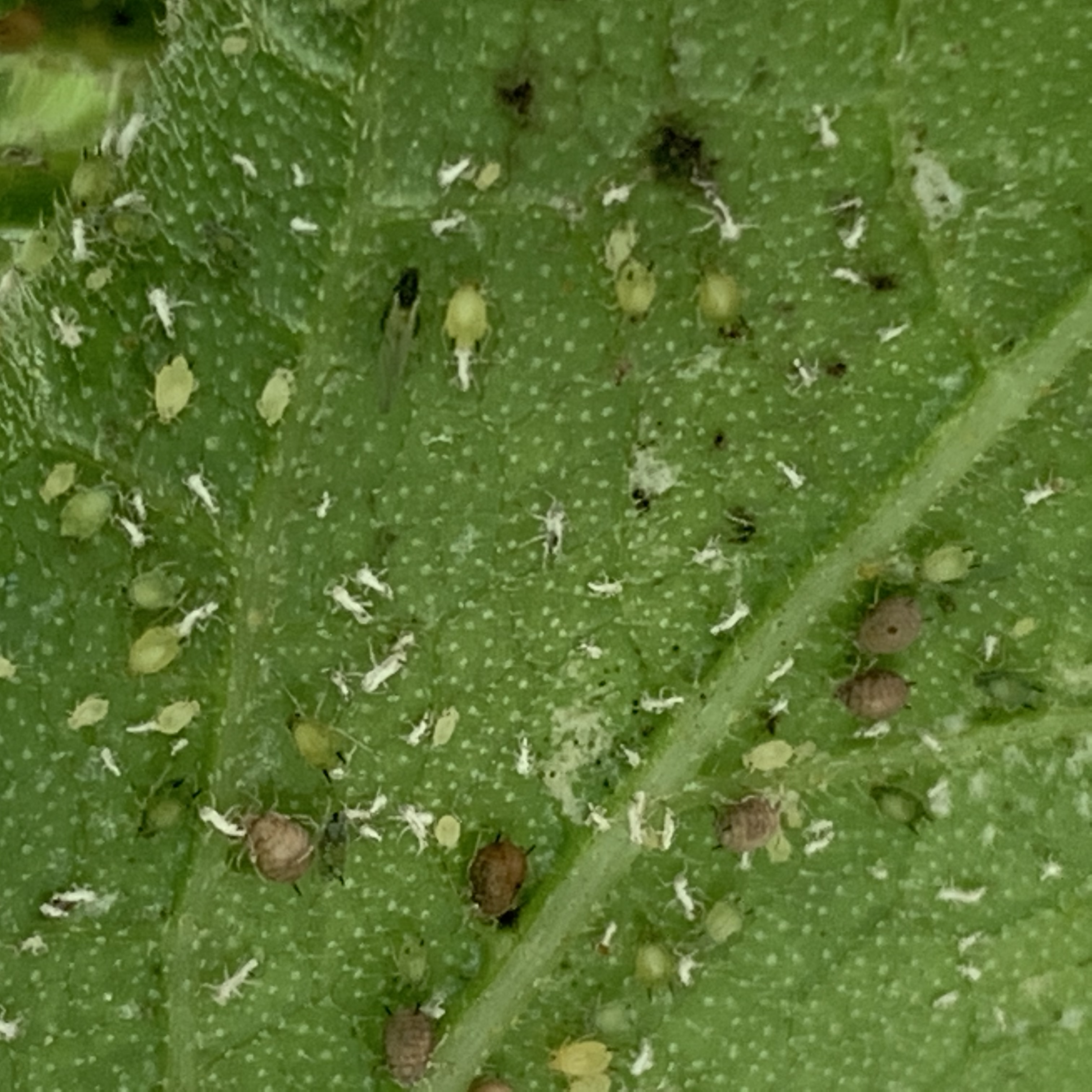 It is SO HOT. We are now at 28 consecutive days at over 90 degrees. This morning I went out to the garden, and in the way out I asked Google Home what the temperature was. “It’s currently 78 degrees in Stafford, but due to the humidity, it feels like 87.”  This was before 8am. It’s like the seventh ring of hell right here in Stafford.

It’s so hot that I am routinely growing outside before 7am to get started in the garden. I try to be done by 9; otherwise, I’m just sweaty and drenched and tired the rest of the day. Saturday Jared and I went out by about 6:45 and worked 3.5 hours to dig up all of the irises I had planted out by the garden. I gave away three full trash bags of irises, mailed some to daddy and Bonita, and I still have several hundred out there waiting to be planted out. I actually went out and watered the heaps today because they are looking peaked.

The garden seems much sunnier since we loved the irises. I’ve asked Jared to get some of the boys from church to help and put in two new beds for me where the irises were. This will make the garden more symmetrical, and it’ll give me 15 more feet of cattle panel trellis. I love my trellises, and it will be fantastic to be able to grow more squash and beans on those next year. This change will give me a hard edge and completely enclose the garden on the east side (excluding the bulb river arch, which I’ll have to move), and it will triple the size of the east cut flower bed. I have loved having cut flowers, and this will give me a chance to grow some more varieties.

Today’s gardening was all about the bugs, good and bad. The bees are back pollinating the zucchini now that I cut back some of the leaves. I think they just couldn’t see the flowers before, and that’s why I was getting so many fruit rotting on the vine. (Not that I’ve been sad to have fewer squash. The slowdown has been a relief.)

This morning I noticed that there was more damage to the lower leaves of the spaghetti squash. Inspection showed that there are a ton of aphids being farmed by the crazy ridiculous ant population this year. After I was finished watering and fertilizing and picking, I got out the Sevin sprayer that attaches to the hose. I sprayed off the leaves with clear water and then turned on the mix to cover the leaves well. I think that ought to take care of it. Speaking of ants, I had at least three kinds of ant on the blackberry bushes this morning. The big black ones are fast, but you can blow them off unlike the small sugar ants and medium-sized red ants. Jared put down some ant killer two weeks ago and it did help, but it may have worn off. I’m not sure why we have so many ants this year, but boy howdy do we!

I have not used insecticide as frequently this year as in years past. Last year I sprayed weekly, but this year the plants are doing very well, so I’m waiting until I see damage to spray. Most damage has been to the tomatillos, which were almost decimated, and the Swiss chard. The squash damage has been new this week. I’ve kept spraying the zephyr and zucchini squash fairly regularly just in case, but they are looking remarkably healthy. I think I’ll grow those in bales again next year. Four plants seems to be the perfect number for us.

I took some pictures today to compare what Swiss Chard looks like when you cut it completely and let it regrow versus just trimming off the bigger leaves as I’ve been doing. It’s interesting to see the difference. The completely cut plants are producing more leaves than they did before. The trimmed plants are producing steadily, but they are not producing huge volumes of leaves. I trim the chard every 7-10 days, I think, and it took about three weeks for the completely cut off plant to look like below:

Sydney got some bad news today from the Utah DLD. She’s trying to figure it out, but she also got her AP tests back and did very well despite all the coronavirus restrictions and adaptations, so that was good news. Jared and I took my aunt to get some ice cream, which is one of the few times she’s been out since March. Most of the time she’s gone out for doctor visits and hospital stays, but she’s also sat in the car while the Sunday aide goes in for shopping. My sister’s girls are going crazy with boredom, so I ordered a bunch of stuff for them. I sent an escape room kit, some laser tag guns, some invisible ink pens, a catapult kit, and a couple of books. I’m pretty sure no one would buy them guns and catapults but me :). But I know it gets really hard to be indoors and not able to do much physically. A little harmless violence is good for the soul in these cases.

The website has been broken for some time, so I wasn’t able to upload this post yesterday.  Here’s some updates from this morning.

Today I planted out the remainder of Del’s scrawny tomato plants — the smallest is just three inches tall — and I put out three cloned tomatoes. I stuffed all eleven plants into one 20gallon grow bag and a bale. If the grow, great. If they don’t, it’s okay. There are still three cloned plants left, so I emailed my dad and told him I may have to plant some in the front yard (a running joke between us where I tell him that his planting tomatoes in the front yard is the most Mississippi thing he’s ever done). He has been laughing about it all morning.

I realized I forgot to turn off the water again! This time I think it ran for about 6 hours which means the plants got about 3 gallons of water each. I’m okay with that. It just means I won’t water the main bed again before Friday, maybe even Saturday. A deep watering is supposed to be better for tomatoes anyway. I’m not certain that it’s good for the peppers, though.

When I went outside for the water, I noticed the larger plants I put in the bales were totally shriveled up. I watered them, and I also checked on the others. The small tomatoes are having no trouble but the big ones don’t like the heat and full sun. More water, and if they look wimpy tomorrow I’ll put the shade cloth over the one in the grow bag.

The only big tomato I’ve grown was that one Anna Russian. I’ve got tons of tomatoes with blossom end rot (casualties of Jared’s abuse followed by the deluge just as I got home, I think) and many of them are now rotting right on the vine as they begin to ripen. It may be sunscald and the heat. Stupice has been a reliable producer, however, and those two plants have produced more than enough tomatoes for Jared and me. I just wish they weren’t so thick-skinned.

I’m picking a handful of beans every day. The vines on the east side of the trellis are huge but I don’t see any beans or flowers. The ones on the west side are doing great!

The spaghetti squash I thought I broke when I stuffed it into the stocking is growing again. I think it may actually mature. I had some of the butternut squash vines try to grow across the ground, so I spent some time weaving those back into the trellis, along with some beans. The squash does grow right over the trellis naturally and doesn’t seem to mind going downhill, but the beans don’t like it at all. I am constantly weaving them where I want to avoid a big tangle on top of the trellis where I can’t reach.

The peppers still look pretty good, and the tomatillos are looking fantastic. I may even have more tomatillos this year than I did last year!

This morning I planted out two small sections of carrots under the beans. It should take them about 3 weeks to germinate, and I’ll need to keep the seeds moist until then. The Brussels sprouts I put on the front porch are bent over and looking terrible today. They may need to come back inside… I’ll check later tonight and tomorrow. The cabbage and cauliflower looks good, but I think something ate the broccoli sprouts! I will start a few more just in case.

The weather report has us over 90 for the next ten days, so I’ll still be working hard to try and keep the plants alive for the foreseeable future. It’s hellish to go outside in the afternoons with the heat index well over 100. I have so much I’d like to do with the hardscaping and irises, but the weather simply isn’t cooperating.