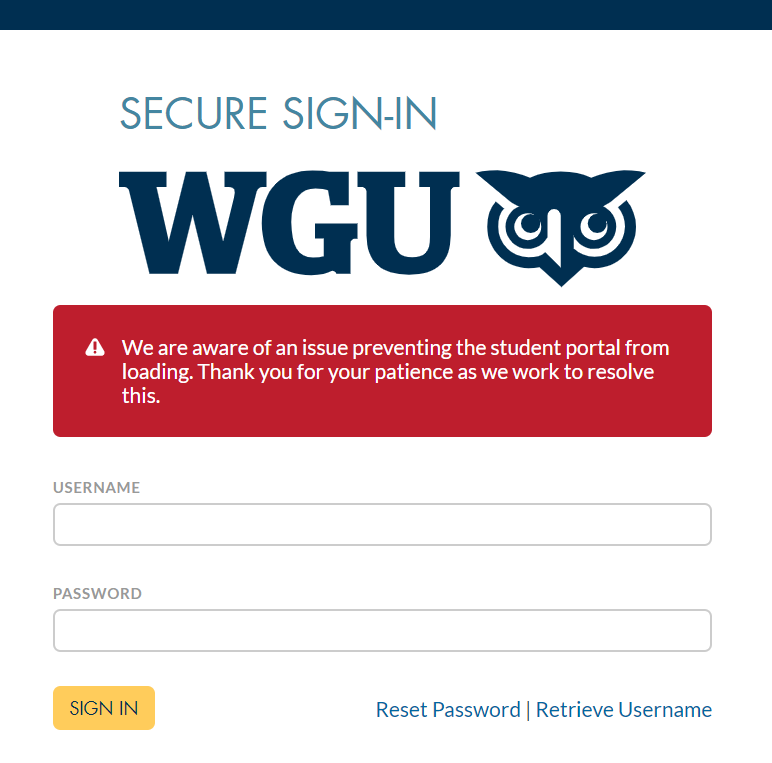 I am relieved. My WGU MEdLT experience is going pretty well. As I expressed earlier, I’ve been a little bit apprehensive about the program. I was very anxious to get started, and I expected to have lots of time while sitting at the hospital with a relative who was having a planned surgery on Oct 30 and 31. As it turned out, my dad came in to town, and I ended up entertaining him for several days until he left on Saturday because our relative’s surgery went very well.

On Nov 1 I had a little time, but I couldn’t get the website to come up. Eventually this error appeared:

I started some coursework Nov 2, but I was really struggling. I guess that I read about 2 hours (lots of interruptions), and what I read was not making a lot of sense. It’s been a good long while since I needed to read for a test, and I was struggling. Plus, I am not a professional teacher, and almost all of the material in the course is geared exclusively at school teachers. All of the materials and terminology was new to me. I got frustrated, and put it aside.

Yesterday, Nov 4, I got up early determined to buckle down, only to be greeted with this:

Great. Luckily I saw little to no problems, although many people were reporting issues with testing, and Jared had problems with his course. I think mainly I didn’t have problem because I was reading and taking notes in OneNote most of the time.

I decided to test a new study technique I read about on Reddit called the Pomodoro technique. As a tomato fan, I was excited to read about this. Basically, you study in units of time called pomodoros (tomatoes), and rest for a certain amount of time. Study 25 minutes and do something else for 5 minutes. Worked like a charm! I studied from 6:30am to noon with no problem. During my rest periods, I went in the other room and painted on a project from my art kit. It took about 25 minutes of painting to complete the painting. At noon I took a break and had lunch. After that, I did another 2 hours with longer breaks, doing some chores like the dishes, yoga stretches, pushups, etc. In the middle of all that I had to go get Sydney from school and run some errands. I ended up studying until about 5:30pm. I estimate I did about 6-7 total hours of study.

After about 3-4 hours of study, the process started to click. I realized that all of the outside materials were using different terms to describe the same processes, and frustratingly, that the course itself does not follow the ADDIE model to organize material. Figuring out all this helped a ton. I was able to rearrange my OneNote notes into a sensible order that will be usable later.

I also found a Course Outline on the course introduction page that had a detailed outline with links to the relevant material embedded in the text. After learning a little about instructional design and having taken the practice test, I recognized it was almost a cheat sheet for studying for the exam. I downloaded the document, read the material it linked to until I was certain I understood it, and filled in the outline with the material to be used as a study guide later.

So, I was taking notes to ensure I was learning material and so that I’d have it for future reference, and I was creating a study guide for myself as I moved along (doubling my synthesis).

I decided I was ready to retake the practice test about 2pm and passed exemplary! I was still feeling weak on two of the areas, plus with some unexpected interruptions, I decided I better study some more. By about 4:00 I was feeling confident and ready to take the test. Problem was, we had to be at Band Together to Fight Hunger at 7pm, and I wasn’t sure I could schedule the test in time. Jared says he doesn’t have an option to take tests immediately, but mine does, so I decided to risk it. About 5:20pm I scheduled for 5:45pm. I studied for the last 25 minutes from my study sheet and fretted about the tech.

So the way the testing works is you go to this page and there’s a little countdown thing. About a minute or so before, the button changes to “start test” and you are prompted to install a little applet. It allows the proctor to take over your computer and see if you are doing anything you shouldn’t (cheating). It took a few minutes to get going — i had to move my camera around and show the proctor all the corners of the room and my desk (which was covered in dead leaves I had planned to paint but she didn’t say anything). The video was cutting out, which stressed me out, but we were able to communicate through the text chat in the applet. I was super anxious, but 25 minutes later, I had checked my work and I was finished with an exemplary!

So, with a total of maybe 10 hours of study, I passed a course that I had no background in, and I really do feel like I learned something. I’m ready to build on this to do some instructional design and analysis.

So, if a person actually already knew something about instructional design, they could take the practice test, use the Course Outline to study specific weak areas, and knock this class out in just a few hours. I studied efficiently (I think), and I am a fast reader, but I think an average person with zero experience could finish the course in fewer than 20 active hours having learned a lot of interesting material. I’m very happy with what I did and learned. I even started a separate notebook on effective teaching techniques as things were mentioned in the text. I am interested in designing effective trainings, but I’m also interested in modeling techniques that actually work.